Researchers in Sydney have come up with a fix for chronic pain that’s not really a fix at all: a... 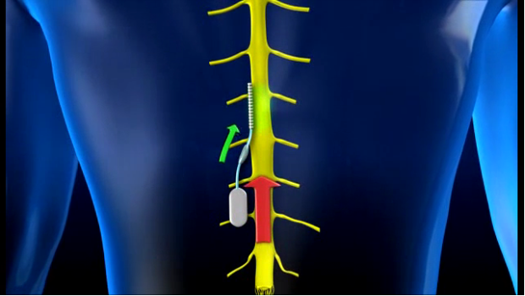 Researchers in Sydney have come up with a fix for chronic pain that’s not really a fix at all: a smart chip that, when embedded in the spine, intercepts and blocks pain messages en route to the brain.

The smart chip is embedded in the spine or somewhere else between the brain and the source of chronic pain. The chip itself is housed in a biocompatible casing that is smaller than the head of a match. That in turn is wired to a larger implanted device containing a battery – which charges wirelessly from an outside source – and a computer processor.

According to its designers at National ICT Australia (NICTA), the chip can measure the properties of signals and pick out the ones that are carrying pain to the nerve center. When it sees a pain signal headed brainward, it can send out a 10-volt electric pulse that blocks the pain signal; no signal, no pain.

The device is designed for those with serious chronic back pain or leg pain, though it could ostensibly be used to block all kinds of pains in the body. That in turn could increase productivity in workers suffering from chronic pain and save patients and health care systems fair sums of money.

It also seems like it could fool the brain into ignoring something potentially important. After all, pain exists to let us know something is wrong, and it’s not difficult to picture scenarios where interfering with that natural signal pathway could lead to larger, more pronounced problems. That being said, the potential to help Brett Favre play through three more seasons can’t be bad.