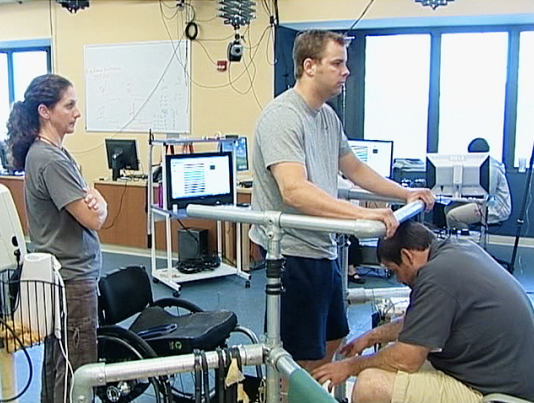 Electrical impulses sent to a paralyzed man’s spinal cord allow him to walk again, researchers say. Rob Summers, 25, can voluntarily move his feet and hips and walk on a treadmill with support, in what could be a major breakthrough for the treatment of paralysis.

The research team, led by Dr. Susan Harkema of the University of Louisville, Ky., stressed that the treatment is not a cure for paralysis and that it worked with just one patient in one trial. But researchers not involved in the study say it is promising — one UK doctor told the BBC it was “mind-blowing.”

The findings appear to show that the legs and spinal cord, not the brain, are in control of movement. That means interruption of messages from the brain may not preclude paralyzed patients from walking again — they would just need new electrical signals to stimulate the spinal cord.

Weeks after winning the College World Series with Oregon State University in 2006, Summers was hit by a drunk driver, suffering spinal cord damage that paralyzed him from the chest down. Neuroscientists implanted 16 electrodes in his spine, and sent electrical impulses to his lower spinal cord, mimicking the signals normally sent by the brain to initiate movement. Summers was suspended over a treadmill while the signals were transmitted to his spine. Writing in the British medical journal The Lancet, researchers say the spinal cord’s own neural network, combined with sensory information from his legs, is able to to control muscle and joint movement.

Summers trained for two years with a treadmill and physical therapists moving his legs to help him stand and walk.

V. Reggie Edgerton of the David Geffen School of Medicine at UCLA said sensory information is sent via neural networks in the legs directly to the spinal cord. The sensory feedback allows Summers to balance himself, bear his own weight and take steps over various speeds and directions, Edgerton said in a news release.

In a statement, Summers said the treatment has changed his life.

“For someone who for four years was unable to even move a toe, to have the freedom and ability to stand on my own is the most amazing feeling,” he said.

He was left with some sensation below the chest, so it’s not clear whether the treatment would work for spinal cord injury patients who experience no sensation. What’s more, Summers was an athlete in excellent physical condition before his injury, which could have helped his rehabilitation.

Still, his doctors hope that someday, patients with spinal cord injuries could use a portable electrical stimulation unit to move independently once again.

The work was funded by the National Institutes of Health and the Christopher & Dana Reeve Foundation.