A satellite that will help scientists understand the solar system’s largest planet is being outfitted with some special interplanetary armor.... 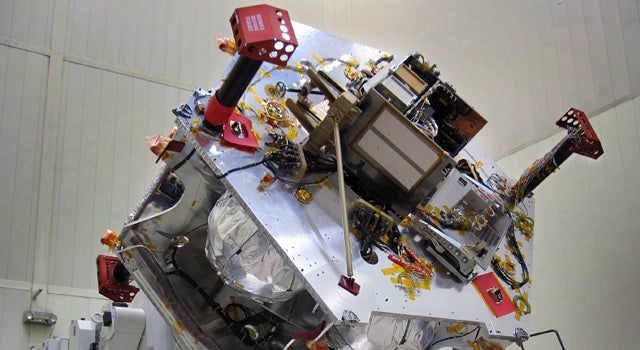 A satellite that will help scientists understand the solar system’s largest planet is being outfitted with some special interplanetary armor.

The Juno spacecraft will study Jupiter’s powerful radiation belt, but it has to be built to survive that radiation. Engineers recently added a special shield around the spacecraft’s electronics, turning it into a Jovian armored tank, says its principal investigator, Scott Bolton, based at Southwest Research Institute in San Antonio.

Juno is scheduled to launch in August 2011 on a mission to study Jupiter’s origins. It will be the first solar-powered craft to visit Jupiter and will carry nine science instruments, which will investigate the existence of a solid planetary core; map Jupiter’s magnetic field; measure the amount of water and ammonia in the atmosphere; and observe the planet’s auroras, according to NASA.

“For the 15 months Juno orbits Jupiter, the spacecraft will have to withstand the equivalent of more than 100 million dental X-rays,” says Bill McAlpine, Juno’s radiation control manager, based at NASA’s Jet Propulsion Laboratory in Pasadena, Calif., in a news release.

A protective lead vest wasn’t space-y enough, however. Lead is too soft to withstand the stress of launch, so engineers at Lockheed Martin Space Systems in Denver designed a titanium box, roughly the size of an SUV trunk, to hold the spacecraft’s command center and power controls. Each wall covers about nine square feet and is one-third of an inch thick. The whole thing weighs about 500 pounds.

Some wires extend from the box to other parts of the spacecraft, so engineers wrapped them in a chain-mail-esque braid of copper and stainless steel, NASA says.

To test the system, JPL engineers put pieces of the spacecraft in a lead-lined tub and bombarded them with gamma rays. Engineers analyzed the results to be sure the radiation vault will hold up.

It won’t protect Juno from every bit of radiation, but it will help considerably and will slow down the radiation-related aging process, NASA says.

The tough spacecraft will study Jupiter’s powerful magnetosphere, which by itself is the largest structure in the solar system. It protects Jupiter from charged particles emitted by the sun. Jupiter’s fast rotation speeds those particles to nearly the speed of light, resulting in a halo of radiation around the planet’s equator.

It will take five years for Juno — named for the Roman god Jupiter’s wife/sister — to reach the fifth planet. Juno will orbit around Jupiter’s poles, ensuring that it spends as little time as possible near the radiation belt.