After 50 years of research, we’ve discovered a strange, beautiful fact about our Sun: it’s more perfectly round than anything... 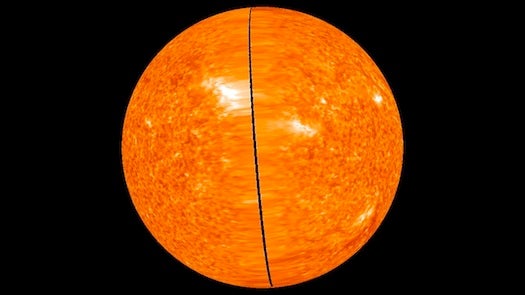 After 50 years of research, we’ve discovered a strange, beautiful fact about our Sun: it’s more perfectly round than anything else in the natural world. It’s not the roundest in a certain category; it’s just the roundest sphere there is. If it were a beach ball, The Guardian writes, it would be a hair’s width away from complete perfection.

Most planets exhibit some sort of a bulge at their equator because of their rotations. Jupiter’s spin, for example, makes it about 7 percent wider. So you’d naturally think the Sun shared some of those properties, but you’d be wrong–the bulge at the Sun’s equator turned out to be relatively minuscule. The Sun is about 1.4 million kilometers across. The distortion at its equator? A mere 10 kilometers. The only thing we know of that’s rounder is a manmade, artificial silicon sphere.

Until recently, Earth’s atmosphere distorted our view in such a way that we couldn’t get accurate measurements. Using instruments from Nasa’s Solar Dynamics Observatory, scientists were finally able to. University of Hawaii’s Jeffrey Kuhn, who led the team behind the measurements, told The Guardian that the observations were clues to the Sun’s interior, which moves at different speeds in different areas. An accurate measurement can help us understand how those speeds are distributed.