A new underwater kite being developed in Sweden could be a low-cost, low-impact method for harnessing ocean energy. Swedish start-up... 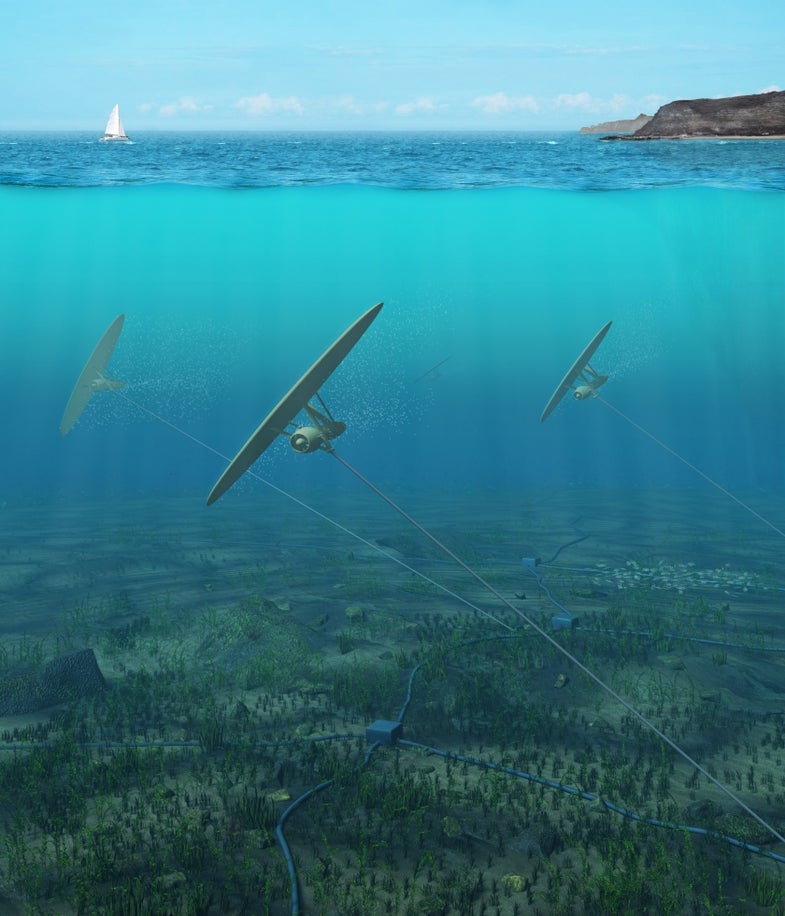 A new underwater kite being developed in Sweden could be a low-cost, low-impact method for harnessing ocean energy. Swedish start-up Minesto has obtained $2.5 million to start testing the kite in Northern Ireland next year.

The kite, called Deep Green, is able to capture tidal energy at 10 times the speed of the water in which it operates.

It consists of a 3-foot-long turbine attached to a rudder and a 39-foot wingspan, tethered to the ocean floor with a 330-foot cable, according to CNN.

The turbine rotates quickly and doesn’t require a gear box, making it lighter and cheaper than other alternatives, according to Minesto representatives. The key is the tether — anchoring and steering the kite allows it to capture much more energy. The kite travels 10 times faster than the water it operates in, resulting in 1,000 times more energy, the company says.

The prevailing methods of capturing tidal energy mimic two common power sources — there are tidal barrages, similar to the method used in hydropower stations, or stream systems, which capture the motion of the tide and work like wind turbines. The kite falls into the latter category, but its airfoil design is fairly unique. Submerged turbines are more commonly designed like windmills under the sea.

The project started at automaker Saab in 2003 and Minesto spun off in 2007. CNN says the company hopes to begin scale-model trials next year at Strangford Lough, in County Down, Northern Ireland, which is already home to a commercial tidal power device operated by SeaGen, a British renewable energy company. The prototype is expected to produce 500 kilowatts of power.

Sea kites would need fairly large swaths of ocean to operate, but they would inhabit small parts of that swath at any given time, as they moved in figure-eight patterns through the water. Minesto representatives say in the future, the technology could be combined with offshore wind farms to produce ocean-driven power plants.