The Energy Fix: Engineering Triumphs Over Wave And Tidal Forces

How water could be harnessed for roughly a third of U.S. annual electricity usage 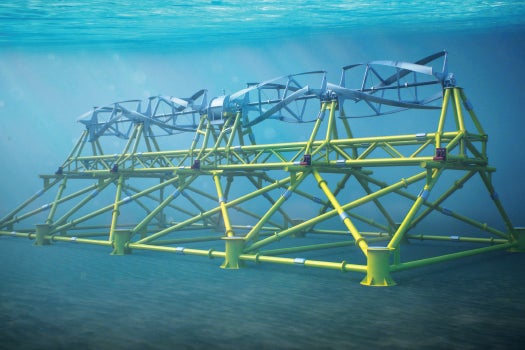 Water is 800 times denser than air, and building a gen­erator able to withstand the tremendous force it generates has hampered the development of next-gen hydropower. If engineers can harness its energy, water holds great potential: about 1,420 terawatt-hours per year, or roughly a third of U.S. annual electricity usage. 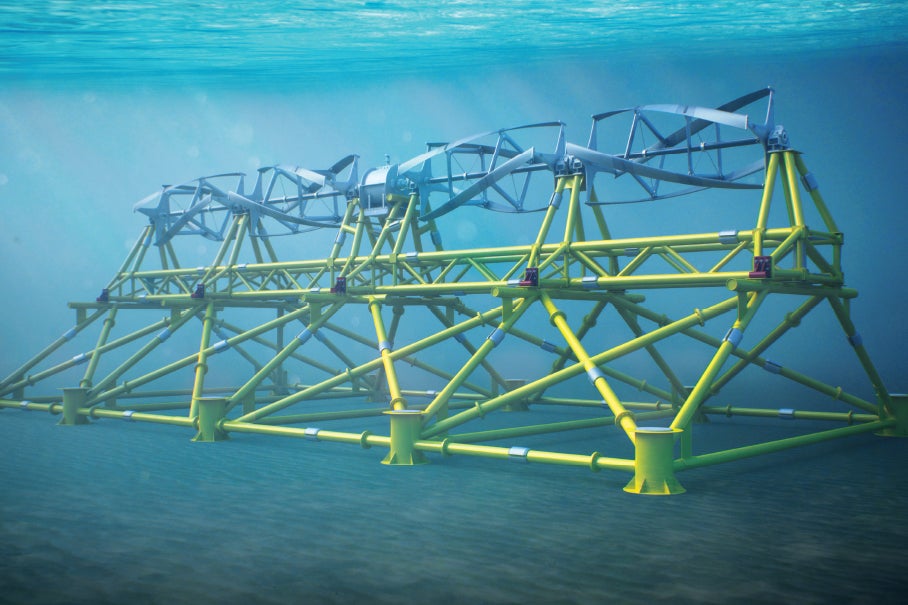 Engineers designed TidGen, which is 98-feet wide and 31-feet tall, for tidal bodies, such as bays, between 60 and 150 feet deep. • A permanent-magnet generator mounted between the four turbines produces up to 150 kw. • The TidGen’s helical turbines have teardrop-shaped foils and rotate in a single direction, regardless of the flow of the current. • A power-and-data cable connects an array of up to a couple of dozen TidGen units to an onshore substation.

Tidal currents are among the most predictable energy sources on Earth. Until recently, the only way to capture their power was to construct massive dams that impeded the flow of water, often in sensitive marine areas. The TidGen, developed by the Ocean Renewable Power Company (ORPC), sits at the bottom of a free-flowing deep river or bay instead. The company installed its first commercial unit in Maine’s Cobscook Bay last summer, and it began delivering electricity to the U.S. grid shortly thereafter. A TidGen can produce up to 150 kW, or enough electricity to power 25 homes, but ORPC plans to add 5 megawatts of capacity within three to five years.

Wave energy is more evenly distributed across the globe than tidal currents, but it’s also more violent: Generators floating on the surface of the ocean must function while being thrashed around. London-based 40South Energy built a wave-energy converter that cleverly avoids abuse. It remains submerged in the water column, automatically adjusting its depth to find optimal conditions and dodge rough storms. The machine generates energy as its top half, attached to a suspended platform, pulls against the bottom half, moored to the seafloor. 40South plans to deploy its first commercial unit, the 150-kilowatt R115, near Tuscany, Italy, this summer. It’s also developing a 2-megawatt version and setting up pilot wave-energy parks in India, Italy, and the U.K.