Cryonic technology could help meet the world’s peak energy demands as well as cut down on greenhouse gas emissions, a... 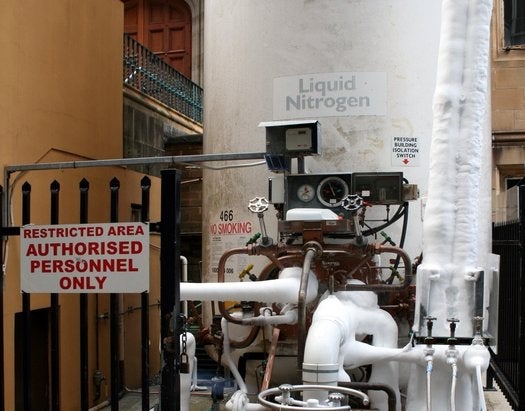 Cryonic technology could help meet the world’s peak energy demands as well as cut down on greenhouse gas emissions, a new study says. No, not by freezing excess humans — by storing excess energy at sub-zero temperatures.

Researchers at the University of Leeds in the U.K. and the Chinese Academy of Sciences are proposing a system that uses excess electricity to chill liquid nitrogen and oxygen. When demand for electricity increases, such as at the end of the work day, warmth from the environment and waste heat from a power plant could be used to boil off the nitrogen. The gas would drive a turbine or engine, producing extra electricity when it’s needed most.

Meanwhile, the gasified oxygen could be fed into the power plant’s combustor, where it would be mixed with natural gas before it’s burned. Mixing natural gas with pure oxygen would cut down on nitrogen oxide production and instead produce dry ice — the solid form of carbon dioxide.

The whole system could cut peak-demand fuel consumption in half, according to a news release from the University of Leeds.

Peak demand is a key problem in energy production. Throughout the world, demand for electricity rises and falls throughout the day in fairly predictable patterns — there are big spikes in the morning, at midday and when people leave work. Utility companies have to be sure there’s enough electricity available for these times, which means during off-peak times, they’re producing more power than they need.

The new system takes advantage of all this, capturing that excess electricity and heat to power a new energy storage device.

So far, it works well on paper; the concept still needs to be tested, however. A paper on the subject will be published in a forthcoming issue of the International Journal of Energy Research.

[University of Leeds via ScienceDaily]