It's hot then it's cold 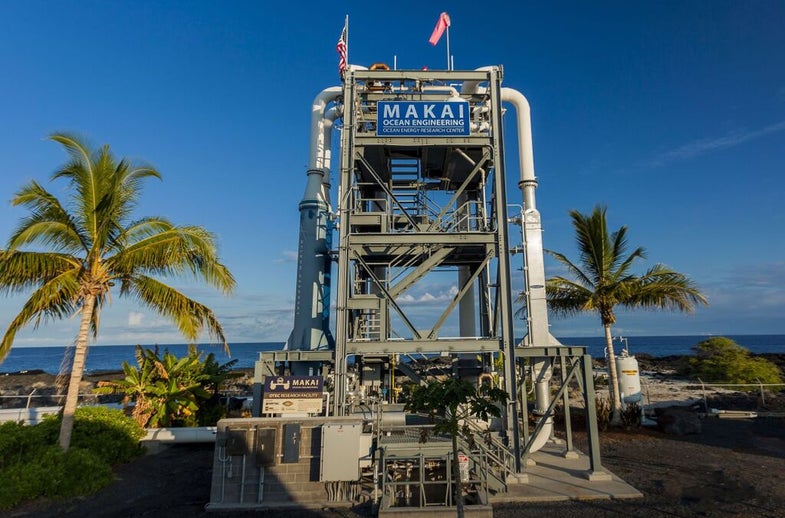 There’s a big difference between the warm, shallow seawater lapping up against a beach and the icy depths of the ocean. Now, researchers are turning that temperature difference into energy at energy plants all over the world. The newest one opened up in Hawaii last Friday, where it expects to generate enough energy to power 120 homes per year.

The plant, built by Maki Ocean Engineering and situated at the Natural Energy Laboratory of Hawaii Authority (NELHA) is the largest plant of its kind in the world.

The plant uses a concept called Ocean Thermal Energy Conversion (OTEC). Inside the system is a liquid that has a very low boiling point (meaning that it requires less energy to evaporate), like ammonia. As ammonia passes through the closed system of pipes, it goes through a section of pipes that have been warmed by seawater taken from the warm (77 degrees Fahrenheit), shallow waters. The ammonia vaporizes into a gas, which pushes a turbine, and generates power. Then, that ammonia gas passes through a section of pipes that are cooled by frigid (41 degrees Fahrenheit) seawater pumped up from depths of around 3,000 feet. The gas condenses in the cold temperatures, turning back into a liquid, and repeats the process all over again. The warm and cold waters are combined, and pumped back into the ocean.

The idea of harnessing the temperature gradient to generate power has been around for a while. The Department of Energy says the OTEC concept originated in 1881 with a French physicist named Jacques Arsene d’Arsonval. In 1930, his student, Georges Claude, built the first plant in Cuba, but it was destroyed by storms soon after it was built. Other plants followed but they were small, and didn’t generate much energy. The idea came back into vogue in the 1970’s and 1980’s, but went out of fashion again when oil prices dropped.

Now, with renewable, environmentally-friendly energy sources in demand, OTEC is edging back into the spotlight. A similar technology was used in 2010 to create a thermal engine that could power an unmanned submarine indefinitely.

In addition to this new thermal plant, there are also plenty of other energy options in the sea. Hawaii is also the home of the first wave energy project connected to the electrical grid, and the Department of Energy is sponsoring a Wave Energy Prize looking for the best ways to derive energy from waves. The final competition for the Wave Energy Prize should take place next year.

Eventually, Maki Ocean Engineering hopes to move their operations offshore, to head directly to the source of the deep, cold water needed to power the OTEC plant. They hope that this planned expansion will generate enough energy to power 120,000 homes every year.