Viruses generally get a bad rap, but they can also be very helpful little machines. For instance, bacteriophages have been... 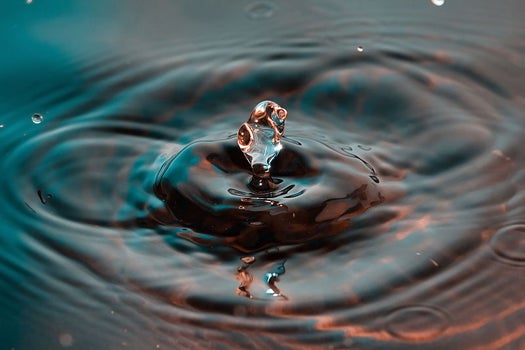 Viruses generally get a bad rap, but they can also be very helpful little machines. For instance, bacteriophages have been engineered to clear up infections that seemed otherwise untreatable, and genetic material from viruses has been used to ease biofuel production. Now a team at MIT is using a modified virus to assemble the biological nano-scaffolding necessary to split water into its constituent hydrogen and oxygen atoms.

Of course, other means to split water into hydrogen and oxygen exist, but none of them are as efficient or simple as the method plants use to oxidize water through photosynthesis, requiring energy from outside the system to carry the process to fruition. Meanwhile, efforts to extract the photosynthesizing components from plants for use in harnessing solar power have been largely unsuccessful.

So the MIT team decided to engineer a virus to imitate plants’ oxidizing machinery by artificial means. Using a zinc porphyrin pigment and iridium oxide catalyst, the team was already able to mimic nature’s own photosynthesizers, which are very efficient at flipping solar power into fuel for water-splitting reactions within plants. But for efficient water-splitting, those catalysts and pigments must be arranged in a very particular way.

Therein lies the team’s innovation: an engineered bacterial virus known as M13 that serves as a sort of self-assembling biological scaffold, spacing the porphyrins and iridium such that oxygen production increases fourfold. The pigments capture sunlight and transfer that energy down the length of the virus the way a wire transfers electricity from one end to the other. That energy in turn powers the iridium reaction that splits the oxygen from the water.

The process still lacks a critical step: once the splitting is complete, the oxygen has been siphoned from the water but the hydrogen is left split into its component electrons and protons. The team is currently exploring other biomimicking systems that might reassemble those building blocks into usable, storable hydrogen atoms. An actual commercial process that produces hydrogen from water as efficiently as plants do is likely years away, but the MIT team hopes to have a working, self-sustaining device that can perform the entire water-splitting process in the lab within two years.