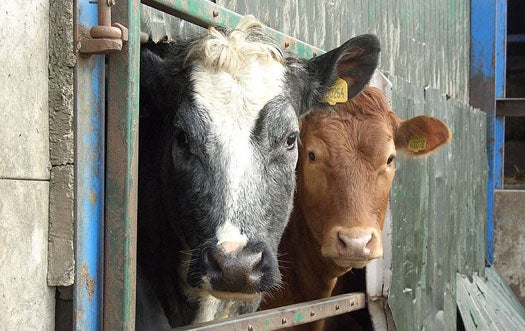 When we think of farming energy, we generally think of feedstocks like corn that can be processed into ethanol, or perhaps other plant life we can culture and harvest like algae. But don’t underestimate the livestock; we’ve recently seen methane-trapping schemes that can power farms and giant cattle treadmills that turn idle dairy drones into power-producing machines. Now, a team of Stanford researchers wants to use a protein found in cow brains to make better batteries.

The concept centers on a particular protein called clathrin, which has a unique knack for assembling itself into versatile structures that foster the formation of complex molecules. Clathrin is present in every cell in the human body, but cows possess a vast wealth of it in their bovine brains that make them an ideal source for the stuff. And given the right biochemical directions, researchers think they can coax clathrin into creating better batteries and solar cells.

In cells, clathrin plays a key role in cell transport. Its tripod-like structure allows it to create a honeycomb-like lattice on the outer surface of cell walls. Atoms and molecules then attach themselves to clathrin according to the protein’s will; when the right cargo is attached, the lattice collapses inward, pinching off the cell wall and delivering it’s molecular payload into the cell’s interior.

It’s this ability to connect into structures and lure in the right molecules that makes clathrin an ideal candidate for creating battery electrodes and solar cells. Scientists can bend clathrin to their will relatively easily, coaxing it into a variety of very useful skeletal structures that they can then attach molecules to. By adding the right blend of inorganic atoms or molecules, the researchers can create electrodes, catalysts, and other battery cell building blocks.

The group has already mashed up gold and titanium dioxide into a material they call “titania” that has photocatalytic properties that allow it turn sunlight into a catalyst for water splitting. Other materials are in the works, all aimed at turning chemicals or sunlight into sweet, sweet energy. Show us an ear of corn that can do that.