How Do Oil Dispersants Work? 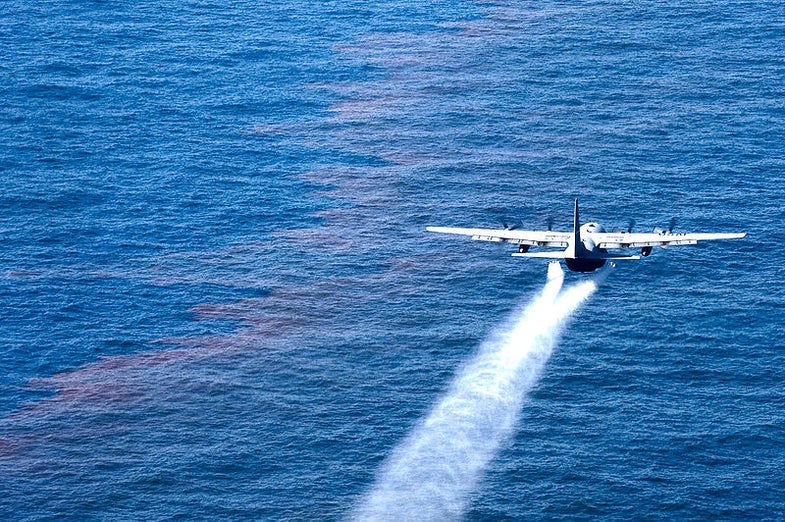 While the world waits to see if a “top kill” operation can seal off the devastating Deepwater Horizon oil leak in the Gulf, the staggering proposition of dealing with the more than 11 million gallons of crude spilled to date remains. To combat the massive slick, BP’s primary weapon is chemical oil dispersant. The company has already used an unprecedented amount of dispersant—over 840,000 gallons—and is poised to deploy more.

So what exactly does oil dispersant do?

The good news, if there is any, is that crude oil in itself is largely biodegradable. It is made of dinosaurs, after all, and naturally occurring bacteria and other underwater microorganisms will feed on crude oil and break it down. The trouble (beyond the devastating effects of 11 million gallons) is that oil’s cohesive properties—the same qualities that make oil-coated measuring cups a pain to wash—mean a vast oil slick like the one currently blanketing the Gulf presents very little molecular surface area to the bacteria that would take it down.

The primary natural force behind the breakdown of a large oil slick is turbulence, dispersant or no. In a sink full of water, swishing that oily measuring cup vigorously gets more oil off than gently gliding it around. But if you add a bit of soap, the measuring-cup cleanup is even easier. Oil dispersant is that dish soap, lowering the tension between oil and water and allowing small droplets of oil to break away from the larger clumps.

Corexit, the dispersant BP is currently using, contains six chemicals. The exact recipe is a secret, according to Corexit’s manufacturer, Nalco, but it contains a surfactant and a solvent. Surfactants are long molecules that are hydrophilic (water-seeking) on one end and oleophilic (oil-seeking) on the other. One end grabs an oil molecule, the other, a water molecule. By reaching across the oil-water boundary, the surfactant lowers the tension that keeps the two substances separate.

A single blob of oil, mixed with dispersant, breaks up in a turbulent flow. The original glob is about a millimeter across. The video comes from a study in the February issue of Physical Review Letters, and appears courtesy of the researchers, Balaji Gopalan and Joseph Katz.

Smaller, dispersed droplets are less threatening for two reasons: they present more surface area to the water, so ocean bacteria can degrade the oil faster; plus, the small droplets are much slower to rise to the surface, keeping the oil at sea instead of in coastal wetlands and giving the bacteria more time to do their magic.

But natural turbulence is key: in calm water, the dispersant won’t help much, just as the measuring cup resting at the bottom of the soapy sink won’t clean itself. So in tranquil waters, cleanup crews must turn to other methods, like absorbent booms and controlled burns. Those techniques are being used along the shore. Most of the Gulf of Mexico isn’t particularly calm at the moment—hurricane season begins on June 1, after all—so for the time being, dispersants are the better choice away from shore.

After the dispersant is applied, the tiny droplets of oil follow the water currents in underwater plumes. Keeping that oil away from coastal wetlands is good, but what about ocean life that’s further afield, like corals and oysters? BP and the National Oceanic and Atmospheric Administration are monitoring the offshore conditions, which is the best they can do right now.

Dispersants have never been applied on this scale, leaving environmental scientists guessing about the consequences. Corexit may have caused seven cleanup workers to be admitted to the hospital with shortness of breath and nausea. Last week, the EPA requested that BP switch dispersants because of toxicity issues, though BP responded that Corexit was not as harmful as the EPA claimed. As of this writing, BP is compromising by using Corexit only under water, rather than on the surface. The underwater application means the dispersant can be used at a lower concentration, in a oil-to-dispersant ratio of 50-to-1.

Besides the issues surrounding Corexit itself, environmental scientists also don’t know what the long-term effects of dispersed oil will be. BP and NOAA are monitoring the dispersed oil closely. In the meantime, they have their fingers crossed that the dispersant at least prevents the oil from washing ashore, where it mucks up delicate coastal ecosystems. “It’s the lesser of all the evils,” said Nancy Kinner, co-director of the Coastal Response Research Center, speaking by phone from the New Orleans airport.

No solution is ideal, and at the moment, environmental scientists think dispersants are the best option. Kinner just finished two days at a meeting of government officials and scientists from the EPA, the NOAA, the Coast Guard, and researchers from Canada and Norway. Among the 50 or so assembled there, she said, the strong consensus was that for this oil spill, underwater dispersants are the right choice. “It’s the tool in the toolbox that has to be used to keep the oil out of the sensitive wetlands and out of the near-shore coastal habitats,” she said.