A Navy-funded thermal engine bobbing off the coast of Hawaii is accomplishing a rare feat — it produces more energy... 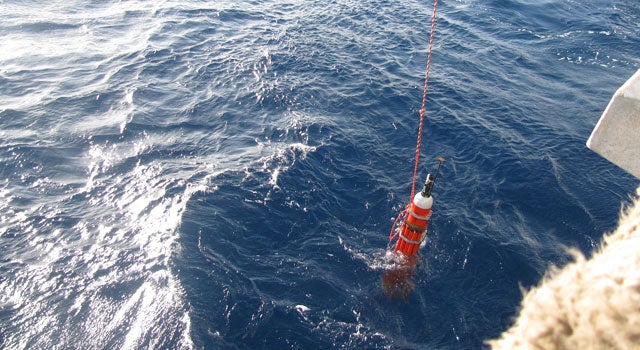 A Navy-funded thermal engine bobbing off the coast of Hawaii is accomplishing a rare feat — it produces more energy than it consumes. Though it’s not quite a perpetual motion machine, it could provide scientists or the Navy with a perpetual presence on the seas. The engine is attached to an unmanned underwater vessel, called SOLO-TREC (for Sounding Oceanographic Lagrangian Observer — Thermal RECharging), and uses the energy of the ocean to derive a practically limitless energy supply.

SOLO-TREC is outfitted with a series of tubes full of waxy phase-change materials. As the float encounters warm temperatures near the ocean’s surface, the materials expand; when it dives and the waters grow cooler, the materials contract. The expansion and contraction pressurizes oil, which drives a hydraulic motor.

The motor generates electricity and recharges the batteries, which power a pump. The pump can change the float’s buoyancy, allowing it to move up and down the water column.

“In theory what you have now is unlimited endurance for something that has this type of engine,” said Thomas Swean Jr., team leader for ocean engineering and marine systems at the Office of Naval Research, which funded the project. “Other things can break, but as far as the energy source, it will only stop working if the ocean ran out of energy, which is unlikely to happen … One of the Navy’s goals is to have a persistent presence in the world’s oceans. This is the type of technology that leads you to that.”

NASA’s Jet Propulsion Laboratory and the ONR designed the thermal engine, and the Scripps Institution of Oceanography at the University of California-San Diego designed the vessel, which weighs about 180 pounds and looks like a large scuba tank. Its batteries are charged by materials that change phases in the different temperature gradients found at various ocean depths.

The float made its first dives last November and was just approved for an extended research mission.

As of this week, SOLO-TREC has made 430 dives from the surface to about 500 meters (1,640 feet), and each time, it’s produced about 1.6 watt-hours of power, more than enough to operate its science instruments, buoyancy pump, GPS receiver and communications devices. You can track its path through the ocean here.

Future generations of thermal engines could harbor all kinds of scientific and surveillance instruments uninhibited by the need for replenished power. Swean said the next step is to put a thermal engine inside a sea glider, perhaps one like the “Scarlet Knight” unmanned glider that made a transatlantic trip last year.

“This type of an engine, as it matures, will find many types of applications. Gliders is one; traditional unmanned underwater vehicles is another,” Swean said. “Essentially you have an unlimited energy supply and we’ve got an engine that is taking advantage of that.”

Yi Chao, principal investigator at JPL, said a fleet of thermal-engine-powered floats could provide oceanographers with constant data about ocean salinity, pH, and other variables. Bigger floats could even accommodate hydrophones or cameras that can venture deep into the ocean, he said.

“For NASA, this is really complementary for our satellites, to what we see on the surface,” he said.

Could it be used to study the oceans of Titan or Europa? Chao said maybe someday, as long as their oceans have enough temperature gradients.

But, he points out, there’s plenty of research left to do right here.

“We know so little about the ocean. It would be nice to explore more of the deep sea,” he said. “It would be a long time before we run out of science to do.”