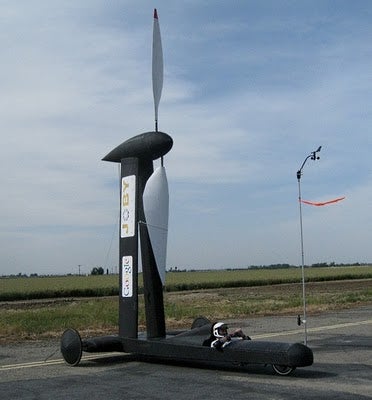 This wind-powered car traveled directly downwind faster than the wind, according to its creator. Faster Than The Wind
SHARE

A California team recently tested a wind-powered car that can actually outrun the wind, adding more fuel to a lingering physics debate.

In a test two weeks ago, the car hit a top speed 2.86 times faster than the wind, according to its creators. Some physicists say this should be impossible, but car-builder Rick Cavallaro says that’s exactly what happened on May 16. What gives?

Cavallaro had funding from Google and Joby Energy to build the car, basically an aerodynamic foam chassis attached to a wind turbine, with the San Jose State University aerodynamics department.

Wired’s Autopia blog features the car and Cavallaro’s quest to prove it is possible to travel directly downwind faster than the wind.

The wheels turn the car’s propeller, and the prop thrust pushes the car, which turns the wheels, Cavallaro says. It’s not a perpetual motion machine, because the prop is also using wind energy as an external power source.

He says the toughest part was designing a transmission system to transfer power from the wheels to the propeller. Design and construction took almost a year, and Cavallaro has detailed photos and schematics on his blog.

His team made eight test runs May 16 at New Jerusalem Airport in Tracy, Calif. The next step is a land-sailing record certified by the North American Land Sailing Association, Cavallaro says.

[Faster Than The Wind via Autopia]