Robotic Kite Power Could Turn The Sky Into A Wind Farm

Google's acquisition of a kite power generator manufacturer suggests a strong future for the technology. 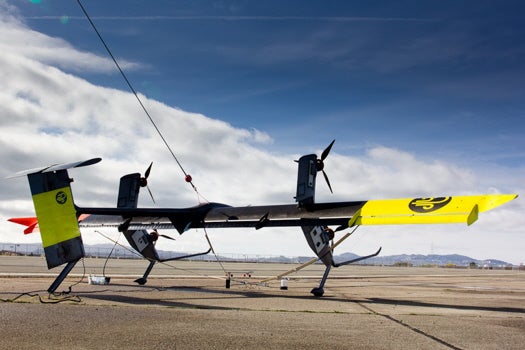 How flying generators work: the kite flies in a circle, off nothing more than lift and wind, and uses that motion to push air over its propellers, which in turn generate electricity. The energy is then transmitted down a tether attached to a landing station, dubbed the “spar buoy.” Makani claims that the system generates more energy than conventional turbines and costs less to build.

Why is Google interested? Google uses a tremendous amount of electricity, and has copped to being a little embarrased by how much fossil fuel it uses. Google actively seeks out renewable energy, and has invested in wind farms before. Efficient, futuristic renewable energy harvested by flying robots? Ideal.