Future airborne wind turbines could spin with greater gusto in the faster winds found at high altitudes, and send power... 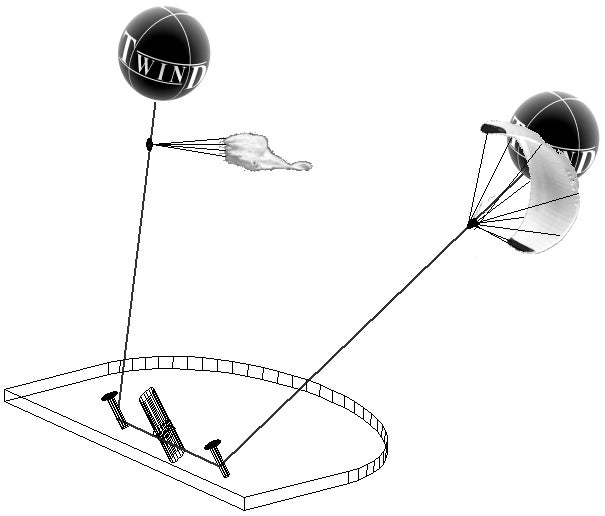 Future airborne wind turbines could spin with greater gusto in the faster winds found at high altitudes, and send power back to Earth via nanotube tether cables. Swarms of energy-harvesting kites, whirling blimps or balloons could stay aloft for a year, and could be reeled in during storms or for maintenance.

This vision, outlined by a researcher at NASA, recently sparked the first federally funded research effort into airborne wind farms. In a bureaucratic infinite loop you just have to love, it’s a study of what it would take to actually study the value of these ideas.

NASA aerospace engineer Mark Moore says it’s worth examining how flying wind farms would work, and how tethered turbines would affect airspace, for instance. Each wind turbine could have a two-mile protected no-fly zone, causing headaches for airliners and unmanned aircraft of the future. But, while it could cause air traffic jams, an airborne farm would not take up any ground resources or cause any pollution, Moore points out.

Plus, wind is more consistent and its velocity is higher at higher altitudes, and the power goes up with the cube of that velocity. You can get between eight and 27 times the power production at 2,000 feet above ground, Moore says.

Offshore flying wind farms would present the fewest airspace problems, but then you would have to bring the energy from the ocean to power plants on land. In other words, it’s a big research problem. Several small companies are studying the concept, like the Italian startup TWIND, which proposes a pair of tethered balloons flying at 2,600 feet. Each balloon has a sail, creating an antagonistic relationship — the balloon with an open sail moves downwind and draws the other balloon upwind, and then the motion reverses. The sails’ movement is transmitted to the ground via the tether, and it can be used to spin a turbine to generate electricity.

But Moore says flying wind turbines involve so many factors — technology, geography, competition for airspace — that the federal government should assume a greater role.

“We’re trying to create a level playing field of understanding, where all of the concepts and approaches can be compared,” he said.

Moore will use $100,000 in federal funds to complete his pre-study study.