Steve Jobs promised us the iPad would change our lives, and while it hasn’t been all things to all people... 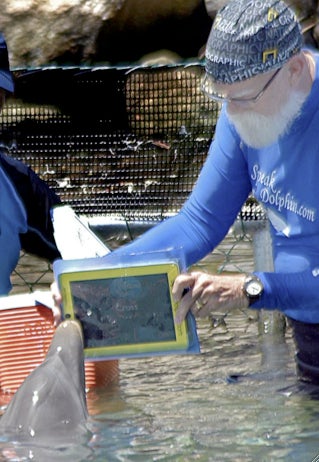 Steve Jobs promised us the iPad would change our lives, and while it hasn’t been all things to all people – what about that front-facing camera, Steve? – the beauty of such a device is that developers (to the extent that Apple will allow them, anyhow) are free to get as creative as they want with the device. Just ask Merlin the bottlenose dolphin. He loves the iPad, and thanks to a symbol-based human-dolphin communication interface being developed for the iPad’s ample touchscreen, he could one day be able to tell you so himself.

The program, being developed by a non-profit called Speak Dolphin at Dolphin Discovery’s swim facility in Puerto Aventuras, Mexico, is being tested on both the iPad and a Panasonic Toughbook. Merlin, a two-year-old bottlenose, uses his rostrum (that’s his elongated beak) to operate the touchscreen, learning to associates symbols with objects.

Researchers think once Merlin gets the hang of using the touchscreen to associate objects, he’ll be able to learn a kind of symbolic language to express more intangible ideas, like actions or even emotions. Of course, this dolphin-human interface requires some other more basic technology beyond the program, like anti-glare screens that Merlin can better see and waterproofing tech that keeps him from ruining his favorite status symbol.

But what’s starting out as rudimentary symbol association on a touchscreen could potentially provide a way for humans to communicate quickly and efficiently, if at a very basic level, with the more intelligent species with which we share the planet. Add “Dog Whisperer” to the list of apps we’d like to see hit the store in coming years.