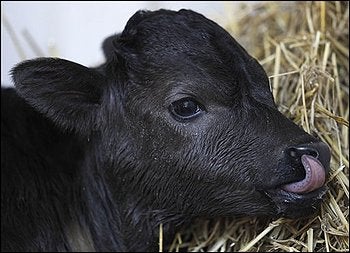 Got, a cloned fighting bull, was born Tuesday at a farm in northern Spain. AP, via Washington Post
SHARE

Scientists in Spain have cloned a fighting bull for the first time, saying they hoped he would be as fierce as his father. The feat could mean that a fresh version of the same animal would be able to fight again and again (and be killed again and again). The 53-pound calf, named “Got,” which means “a glass” in Valencian, was born Tuesday, BBC reported.

It took three years for the team to find a way to do it, according to the project leader, Vicente Torrent.

Got was created using nuclear transfer, wherein DNA from the “father” bull was inserted into cow’s eggs that had been stripped of their nuclei. The process created embryos which were then implanted into a surrogate cow. The same process was used to create Dolly the sheep, the first cloned mammal.

Got should exhibit the same traits as his genetic predecessor, Vasito, researchers say.

Several news outlets reported last year on the efforts of a Spanish farmer to clone his prized bull, but this is not the same experiment. That bull’s name was El Alcalde, which means “the mayor.”

Torrent told AP the accomplishment could pave the way for a “tissue bank” to save endangered species. Gene banks already exist in several countries, but they usually involve frozen semen from various animals.