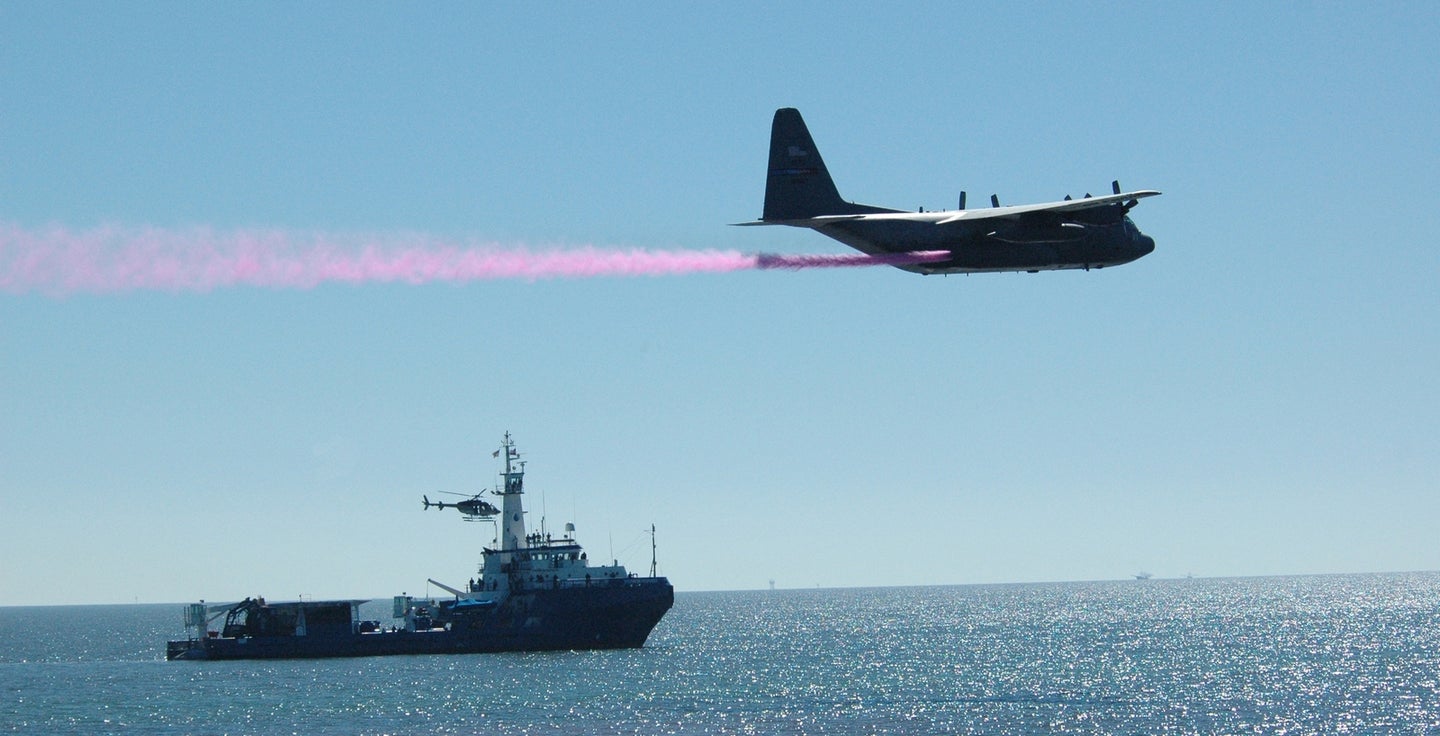 Huge C-130 aircraft from the U.S. Air Force Reserve have joined the fight against the Deepwater Horizon oil slick, which now threatens to ravage the local ecosystems and fishing industry in the Gulf of Mexico. Each aerial tanker holds aerial spraying equipment that can help spray dispersant to break up the oil slick on the water, according to Ares Defense Blog.

Two of four modified C-130s have deployed to the Gulf of Mexico from the 757th Airlift Squadron at Youngstown ARS, Ohio. They typically spray pesticides or fire retardant using the Modular Aerial Spray System (MASS), although other Air National Guard units have the Modular Aerial Fire Fighting System (MAFFS). A newer MAFFS 2 version can dispense 30,000 pounds of retardant in just 3 to 5 seconds from one nozzle at almost 14,000 pounds of thrust. Last year, PopSci took a tour of a firefighting 747 that uses similar technology.

Such flying behemoths are just the latest weapon being thrown into the desperate battle to contain the oil slick. The Macondo well has been spilling an estimated 5,000 barrels of oil per day into the Gulf since the Deepwater Horizon rig exploded and sank on April 20. Controlled burning has only had limited impact on the spill, and robot submarines have failed to activate a cutoff valve to cap the undersea well leaking oil into the Gulf of Mexico.

BP has corralled almost 106,000 gallons of dispersant — one third of the world’s supply — to try and break up the oil slick. But the unfolding disaster has already shut down fishing between the mouth of the Mississippi River in Louisiana and Florida’s Pensacola Bay. That area provides the majority of U.S. production of oyster and shrimp, as part of the $1.8 billion seafood industry in the Gulf that’s second only to Alaska, Reuters reports.

As if to underline the magnitude of the event, the U.S. Environmental Protection Agency has an open submission form for anyone with a tech solution to the oil cleanup problem. Just make sure to note the cost, because BP already faces perhaps the most expensive oil cleanup ever — and that’s not including the collateral environmental damage which may very well cripple the Gulf fishing and tourism industries.