The so-called green train is slated to run as a one-year experiment. Just how viable is it? 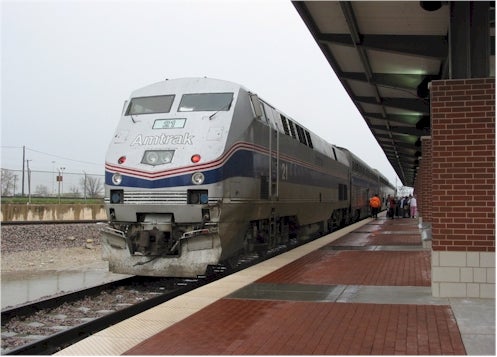 Amtrak has unveiled the nation’s first biodiesel train, with a surprise twist — the fuel is derived from beef byproducts. The Heartland Flyer train will conduct its biofuel trial run for a year between Oklahoma City and Fort Worth, The Guardian reports.

Previous tests with a stationary locomotive engine showed that the B20 biodiesel blend — 20 percent biofuel and 80 percent diesel — cut back on hydrocarbons and carbon monoxide each by 10 percent. It also reduced particulates by 15 percent and sulfates by 20 percent.

Unmodified trains can use the B20 fuel mix. But the Heartland Flyer locomotive was outfitted with new engine assemblies to provide a clean slate for engineers to gauge any wear or tear at the end of the trial. Some biofuel blends can increase stress on engines, while others burn even cleaner than normal fuel and actually boost engine durability.

Amtrak’s test run draws upon a $274,000 grant from the Federal Railroad Administration. The company previously started other green initiatives such as reducing idling times for diesel trains, and adding regenerative braking systems to electric trains.

A greener train sounds great in theory, although we do have to wonder about the viability of spreading this beef-fueled approach. Sure, it may benefit certain regions around Oklahoma and Texas where a cattle industry produces beef byproducts as waste regardless. But it’s hard to imagine corn-fed cattle as an environmentally friendly stock for widespread biofuel usage, especially when some scientists already fret over the economic and environmental impact of making biofuel directly from corn.