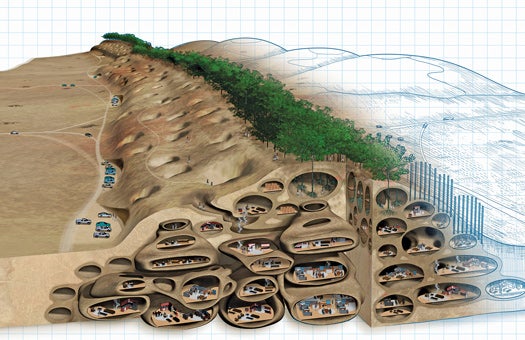 Could a student architecture project help save millions of Africans from the relentless advance of the Sahara desert, a phenomenon that’s fueling drought, starvation and poverty? There’s one that has people talking. Borrowing from an experimental solution for firming up building foundations in earthquake-prone areas, Swedish architect Magnus Larsson, 34, has proposed solidifying the sand dunes at the leading edge of the Sahara to create a habitable 3,728-mile-long desert-blocking wall.

Outlandish? Yes and no. In terms of science, the method is proven. Researchers at the University of California at Davis have been investigating the technique—which involves injecting the bacterium Bacillus pasteurii into the soil in a calcium-rich, alkaline mix—as a means to stabilize the ground in earthquake-prone regions. In the lab, it can solidify 32 square feet of soil in a matter of hours, although they estimate that it would take up to a few weeks for large-scale solidification.

In terms of geographic breadth, Larsson’s proposal, which he submitted as a final-year project while studying at London’s Architectural Association, is roughly on scale with the Green Wall of the Sahara, a 23-nation initiative already under way, to contain the spreading desert with a nine-mile-thick barrier of trees extending along the same stretch that Larsson is eyeing. In fact, Larsson sees his project as supporting the Green Wall, literally. His hardened sand wall—up to 1,000 feet deep in some places—would provide a more stable base for the trees, with full-scale homes carved out of the dunes. In his drawings, the dwellings look like millions of row houses with green roofs keeping the desert at bay. Solidification, Larsson maintains, would pose few risks to the environment or human health, since it relies on harmless microbes naturally present in marshes and wetlands. The U.C. Davis method simply spurs the microbes to excrete extra calcium carbonate, bonding the sand together tightly like cement.

For now, Larsson is seeking funding for large-scale tests to demonstrate whether and how his method would work. Even if it does, he admits, the implementation would be financially daunting. “The cost would be a ridiculous figure,” he says. “It’s like asking what it would cost to build the Great Wall of China today. It wouldn’t be cheap. But then again, any project attempting to tackle such an ambitious challenge is going to be expensive.”

Turn Off Energy Hogs from Anywhere—Without Getting Up
For those foggy mornings when you leave the house without turning off the TV, Picowatt plugs let you remotely power down the tube, along with the rest of your electronics and lights. Plug Wi-Fi-enabled transmitters into your wall sockets and connect your electronics. The transmitters relay real-time energy usage and cost data to a personalized Picowatt Web page or to your phone. From there, it’s just a few clicks to manage your home’s energy consumption. $80 per plug; tenrehte.com