Why Can’t Planes Fly Through Volcanic Ash? NASA Found Out the Hard Way

If you’ve been anywhere near a television or Web enabled device in the last week (and you must have been),...

If you’ve been anywhere near a television or Web enabled device in the last week (and you must have been), you know that a volcanic eruption in Iceland has grounded airline flights across Europe and even halted a few flights into the northeastern-most areas of Canada. What you probably don’t know is how to pronounce the name of the volcano (Eyjafjallajökull) or why an eruption in Iceland is grounding flights in London, Madrid and Berlin.

After all, planes fly through lightning storms, heavy fog and the occasional flock of geese and come out fine on the other side with amazing consistency. But a volcanic ash cloud presents it’s own unique set of problems, particularly to an aircraft engine’s working parts. A group of Finnish F-16s are currently circling the area to see just how bad the air quality is for jet engines, and some airlines are conducting their own tests to see just what kind of damage this ash cloud might exact on their hardware.

Luckily for us, NASA already performed an ash cloud test on an airliner a full decade ago, albeit unintentionally. In February of 2000, a NASA DC-8 bound for Sweden flew right through an ash plume produced by Icelandic volcano Mt. Hekla. The flight crew couldn’t see the plume, and in a stroke of good fortune they landed their plane at their destination without incident. In fact, no visible damage was detected upon arrival, but a closer inspection turned up some harrowing clues to just how devastating volcanic ash can be on an airplane in flight. 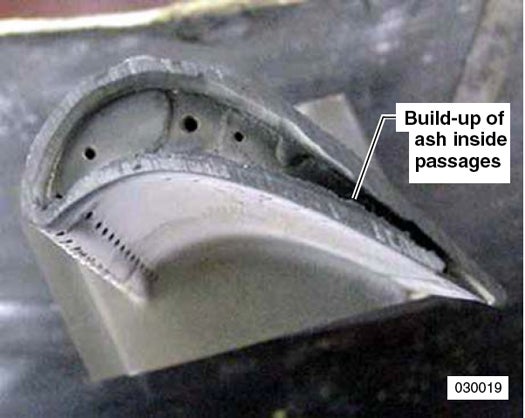 The fan blades where deeply gouged (see below), the critical cooling components were clogged with a sooty gunk, and the engine’s innards were coated with a glassy, silicate material (see above). The in-flight data showed that the engine hit nearly 2,000 degrees Fahrenheit, enough to melt silicate rocks. That’s lava in your jet engine, not ideal for longevity. 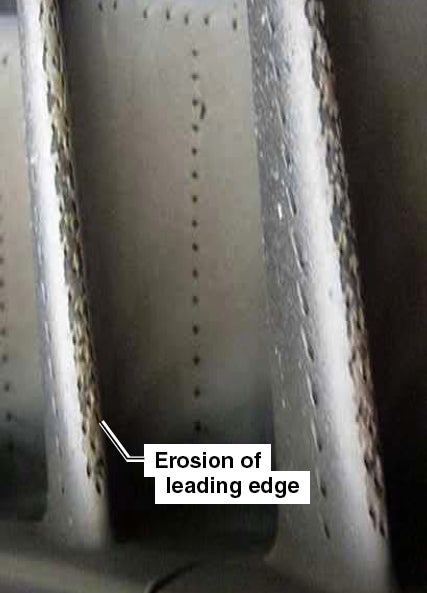 Interestingly – and quite fortunately for the crew on board – the relatively low dose of hot ash the DC-8 received temporarily turbocharged the engine by polishing the engine parts and letting air move more freely through the components. But make no mistake; too much more of that kind of performance enhancing would have led to engine failure, and at 30,000 feet all engine failure is a serious issue.

Of course, this is all in addition to the fact that hot ash plumes can degrade aircraft windows to the point of failure ro compromise the integrity of an aircraft’s skin. But the fact that these plumes can be hard to detect from the flight deck explains why no one is leaving the ground in Europe; there’s no flying under or around the ash cloud because in some cases pilots can’t distinguish exactly what they’re trying to avoid.

Oh, and for the record, it’s “AY-uh-fyat-luh-YOE-kuutl-uh.” And if you want to know how you get that pronunciation from Eyjafjallajökull, you’ll have to ask elsewhere.