The Quest To Harness Wind Energy At 2,000 Feet

High-altitude wind contains enough energy to power the planet. A Boston start-up wants to be the first to bring it down to Earth. 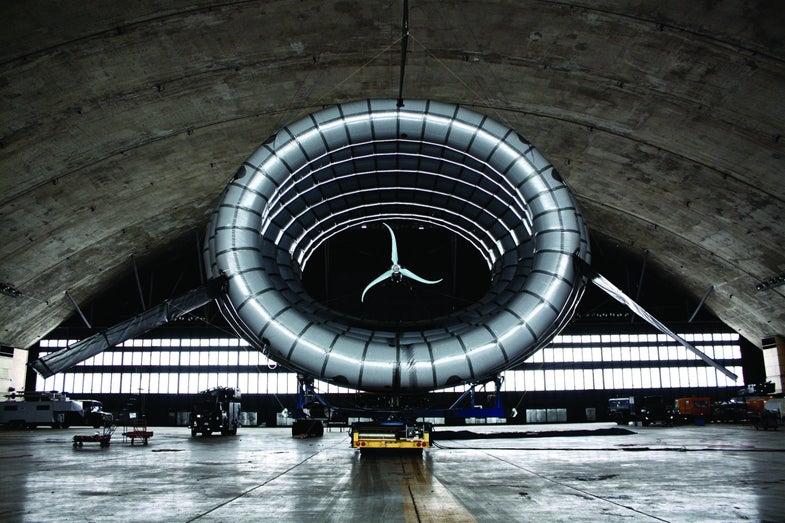 Nothing about the grooved, inflatable body taking shape inside Greentown Labs in Somerville, Massachusetts, resembles a wind turbine. It looks more like a jetliner’s emergency ramp, or something you’d tie behind a boat and cling to desperately while bumping across the surface of a lake. But the 14-foot-long structure most resembles what it actually is–an air-filled wing.

To be more precise, it’s a stabilizing fin, part of a tube-shaped, robotic airship designed to tap the power of high-altitude winds. The blade tips of today’s tallest conventional wind turbine, installed at a test center in Denmark this year, stretch to 720 feet. The fully autonomous, lighter-than-air BAT (short for buoyant airborne turbine) will climb as high as 2,000 feet, where winds blow stronger and steadier. 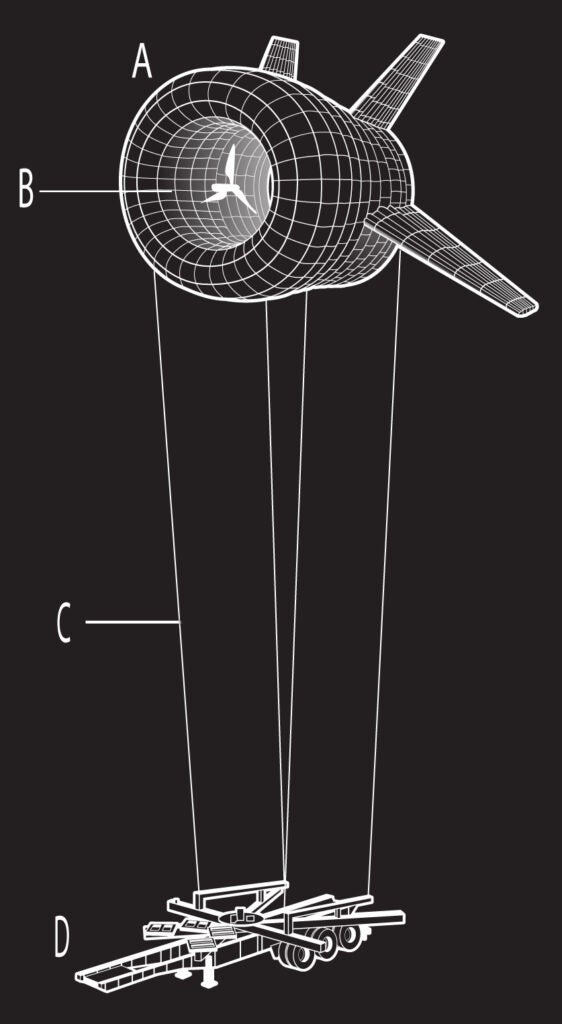 A The body, or shroud, of Altaeros’s Buoyant Airborne Turbine (BAT) is kept aloft by 1,000 cubic meters of helium. Four air-filled stabilizing fins passively steer the BAT into incoming gusts. The company worked with airship and spacesuit pioneer ILC Dover to develop its proprietary UV- and weather-resistant fabric.

B The first commercial BAT will house a 30-kilowatt turbine, which could power roughly a dozen homes. A larger version will fly a 200-kilowatt turbine. The BAT can also carry radio and cellular antennae or wireless Internet gear to create or extend voice and data networks.

C Three double-braided polymer tethers prevent the airship from drifting away. One contains copper conductors that transmit power, collected as high as 2,000 feet, down to a battery or the grid.

D The ground station, responding to sensor data from the BAT, helps the craft hunt for optimal wind conditions, around 30 mph. It can adjust the BAT’s altitude using three winches and rotates as the craft faces shifting air currents. The station can also reel the BAT all the way in if wind speed exceeds 75 mph.

“There is more than enough energy in high-altitude winds to power all of civilization,” says Ken Caldeira, a Stanford University climate scientist, who co-authored a 2012 study that ballparked the potential at 1,800 terawatts–more than four times the estimate near the surface. “The question is whether technologies can be created that can reliably and affordably extract it.” Altaeros Energies, the company behind that BAT, is poised to prove that it’s already done so.

Provided, of course, the vehicle hasn’t sprung a leak. “We’ve been meaning to do this for a while,” says Adam Rein, the company’s lead director and co-founder, over the buzz of the air compressor. The fin had been pulled from storage, where it had been sitting deflated since test flights several months before. “We’re trying to understand how durable the material can be,” Rein says. “We have a vision of putting out a product that you could deploy, leave there for a year or two, pack down, and move to a new site or a new customer.”

While typical wind turbines of similar scale require a large crew and several days to install, the BAT is ready to fly and generate power the day it arrives. And instead of pouring concrete foundations and erecting a multistory tower, a few people with a truck can inflate the airship on site and attach it to a base station, which they secure to the ground with the same anchor ties used for telephone poles.

Logistical ease is critical to Altaeros’s initial customers: communities around the world too remote to access an electrical grid. Often, they must rely on diesel generators–one of the least-efficient power sources–because renewable energy systems are not economically feasible. In the Arctic, for example, there isn’t enough sunlight to justify solar power for months at a time, and a combination of permafrost and snowed-in roads complicates the installation of standard wind turbines.

Many sites in Alaska fit this description, and so the Alaska Energy Authority awarded Altaeros a $740,000 grant to demonstrate its technology. The company plans to start flying its first commercial-scale BAT, a 30-kilowatt system that could reduce diesel consumption by 11,000 gallons annually, near Fairbanks next year. (Altaeros is also in talks with potential customers in Brazil and India, where listless ground winds scuttle conventional turbines.) The company then hopes to scale up the BAT to 100 or 200 kilowatts, enough to compete in earnest with the generators that support commercial operations, such as mines and construction sites. In fact, Altaeros sees industrial sites as opportunities. Why install permanent wind or solar generation when you’ll only be in a given location for a year or two? “We’re not trying to replace wind turbines,” Rein says. “We’re trying to expand wind energy to places where it doesn’t work today.”

In 2010, when Rein and co-founder Ben Glass were fresh out of MIT and building their first balsa-wood prototype, high- altitude wind energy was still largely unknown. Altaeros has now grown to a 10-person operation, and a half-dozen or so competitors are racing to market with roughly a dozen more working on designs. The most high-profile is Google, which last year acquired California-based Makani Power and folded it into the Google X family of moonshot projects. Whereas Makani and others aim to develop utility-scale turbines capable of powering hundreds to thousands of homes, Altaeros plans to sell modest units that fill an immediate niche.

That’s not to say that the Altaeros BAT is anything less than a sophisticated robotic system. In reality, robotics are central to the BAT’s promise of lower costs and increased reliability. The unit can adjust its height to hunt for optimal wind speeds, retracting or unspooling its tethers to descend or ascend. It can also respond automatically to changing weather conditions, dodging storms that wear down ground-based systems and lead to costly maintenance or replacement.

Eventually, Altaeros also hopes to produce a utility-scale turbine–one tailored for offshore power. A megawatt-class BAT anchored 10 miles off the coast would need significantly smaller foundations than traditional offshore wind systems, whose towers can overturn without substantial reinforcement. “It solves a lot of the headaches that offshore developers have today in putting these big turbines out there,” says Glass, the company’s CEO and CTO.

For now, Altaeros is concentrating fully on the turbine in Somerville, the one whose fin has finally finished inflating before me. By now, most of the employees have drifted back to their cubicles in the rear of Greentown Labs. The company helped found this incubator in 2011 for start-ups with a focus on green technology, and it’s grown to include 45 of them–many of which have carved out space in the building’s cavernous fabrication area. Glass tells me to try lifting the fin, which now bisects the room. It takes one hand and almost no effort–a feat that’s to his credit, not mine. “It’s light, isn’t it?” he asks, beaming with that special sort of pride only inventors can get away with. He picks up the other end, and the future of wind energy, it would seem, floats in our fingertips.

Altaeros has a handful of competitors. While their tactics may differ, their goal is the same: to harness the wind where it blows strongest. -Alexandra Ossola

KiteGen
Device: Kite
How It Works: An arm extending from the ground station moves the kite in a figure-8 pattern. As the kite pulls on its tether, a generator on the ground produces power.
Altitude: 1,000 to 8,000 feet
Commercial Scale: 3 MW
Timeframe: 1-2 years

Ampyx Power
Device: Plane
How It Works: The PowerPlane glides on autopilot in a figure-8 pattern. As the plane climbs it pulls on its tether, which is connected to a ground-based generator.
Altitude: 1,000 to 2,000 feet
Commercial Scale: 2?3 MW
Timeframe: 2017

NTS X-Wind
Device: Kite
How It Works: Six to 24 kites pull generators around a track elevated 20 feet off the ground. During still periods, these become motors, towing the kites to keep them aloft.
Altitude: 600 to 1,800 feet
Commercial Scale: 24 MW
Timeframe: 2.5 years