And it's detectable with standard MRI equipment 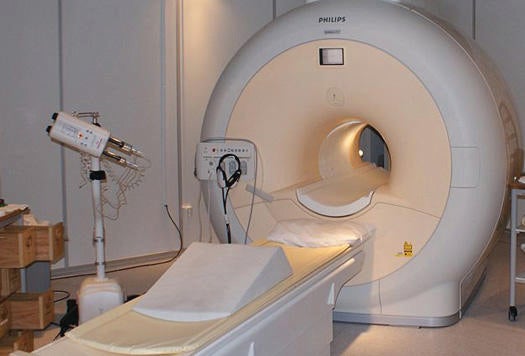 In warfare, victory often rests on two key aspects of combat: good battlefield intel and a versatile mix of weaponry to counter various threats. But when it comes to battling cancer, physicians often work with little real-time information and a collection of single-facet treatments, many of which cannot be used in tandem. Now, researchers at Rice University and Baylor College of Medicine are attempting to tip the scales back in physicians’ favor, creating a single nanoparticle that can seek out cancer cells, tag them with fluorescent dye, and kill them, all while physicians look on via real-time MRI tracking.

The treatment takes advantage of nanoshells, particles first created over a decade ago that can convert normally harmless laser light into tumor-slaying heat. The researchers wanted to add additional weaponry to the nanoshells, so they added a fluorescent dye that glows to near-infrared light. They found that the dye molecules worked better when separated from the surface of the nanoshell by just a few nanometers, so they inserted an iron oxide layer that’s visible to MRI between the dye molecules and the nanoshells. For good measure, they then attached an antibodies to these multi-tasking nanoshells that allow them to bind to breast and ovarian cancer cells.

The result is a cancer-fighting weapons system that can seek, identify and destroy an offending tumor. By tailoring the antibodies for the patient’s particular cancer, doctors can inject a battalion of nanoparticles into the bloodstream and let them seek out tumors. The particles can then home in on problem areas and destroy tumors with heat.

While human trials have not yet begun, they are likely not too far away because all aspects of the treatment are already individually moving through the FDA approval process, which means they all already have solid records of efficacy. The next step will be getting the nanoshells out of laboratory cell cultures and into animal testing. If all goes well, physicians might be launching tailored nano-assaults on deadly cancers within a relatively short time.