It's a miniature version of cancer -- but it's working for us. 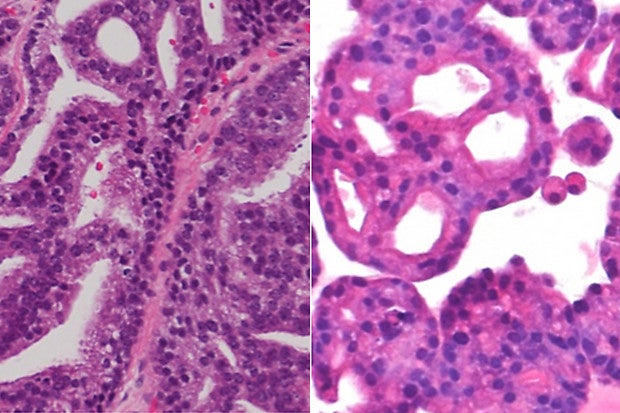 When it comes to treating cancer, all tumors are not created equal. Within every cancer type – whether it be in the bone or the breast – each patient has a unique set of mutations that cause their cells to be cancerous. That means therapies need to be personally tailored to each individual in order to be most effective.

Hoping to make this kind of personalized medicine a reality, researchers at Memorial Sloan Kettering Cancer Center have successfully grown six functioning prostate cancer ‘organoids’ outside the body. Derived from biopsies of patients with metastatic prostate cancer, the tiny organic 3-D structures are comprised of thousands of cells, grouped together and organized like an organ. Their tissues are also highly similar to the biopsy samples from which they came, making them almost like tiny replicas of prostate cancer in a petri dish. The researchers hope to use these organoids as tools for testing new cancer drugs in the future.

They’re almost like tiny replicas of prostate cancer in a petri dish.

According to Dr. Yu Chen, the lead researcher on the project, organoids are relatively new to medicine but are proving to be promising for research, as they mimic human organs. “We have all different kinds of cells in our body, but within each organ, there are also multiple cell types,” Chen, an assistant attending physician at MSK, tells Popular Science. In the lab, organoids continuously generate these different cells, just on a much smaller scale.

Chen says that with his lab’s cancer organoids, the cells are a bit more monotonous, since the cells in a tumor are mostly the same. However, each cancer organoid is unique from one another, containing the distinct mutations from each patient’s cancer.

Now the idea is to create a whole lot of these tiny prostate cancer organoids, to determine which medicines work best for different subsets of patients. “If we have the mutations from a large number of patients, this will help us discover which mutations correlate to drug sensitivity or drug resistance in the laboratory,” Chen says, who noted that the organoids could be used to test multiple drugs at the same time.

Meanwhile, experts predict that more and more patients will have their cancer genomes sequenced in the future, revealing which mutations are turning their cells against them. And with the information gleaned from organoid testing, researchers will be able to know which mutations respond better to certain treatments, making therapy options a lot more personal.

The researchers published their findings in the journal Cell.