Can a Whale Get Rabies?

“It’s not as silly a question as you might think,” says Michael Moore, a marine-mammal research specialist at Woods Hole... 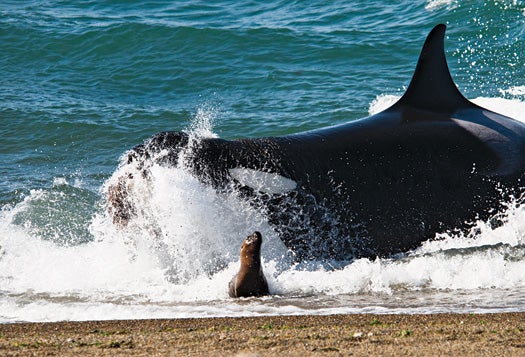 “It’s not as silly a question as you might think,” says Michael Moore, a marine-mammal research specialist at Woods Hole Oceanographic Institution in Massachusetts. “It would take some extraordinary circumstances, but any mammal can get rabies.”

Bats, coyotes, foxes and raccoons are the most common carriers of rabies but, being landlubbers, it’s highly improbable that any of them would have a chance to bite and infect a whale. One of those animals could, however, bite a seal that’s resting on a beach, and then that seal could swim off and bite a whale. Although there is absolutely no record of a rabid whale, and only one documented case of rabies in a seal—a ringed seal caught in 1980 in Svalbard, an archipelago off Norway—the scenario may soon be of greater concern. “Starting 10 years ago, coyotes began to prey on harp seals here on Cape Cod,” Moore says. “Because of that, I like for my staff to get vaccinated. There’s a very small chance that a seal will have rabies.”

Seals aren’t known to attack whales (it’s a size thing), but rabid animals behave erratically, so it could happen. Even if a rabid seal did bite a whale, it might take years for the whale to show symptoms. To become infected, the virus must travel along a nerve from the bite location to the central nervous system and brain. This is why a person bit in the face by a rabid fox will show symptoms earlier than if that person had been bitten in the foot. Rabies travels along nerves at a rate of 0.3 to 0.8 inches a day, so if a 50-foot-long whale was bit in the tail, it might take two to five years for the virus to reach the animal’s brain and manifest.

What signs should one look for to identify a rabid whale? “Well, the telltale foamy mouth would be very difficult to spot in the water,” says Gregory Bossart, the chief veterinary officer at the Georgia Aquarium in Atlanta. “But as with other animals, rabies would interfere with any activity that involves the central nervous system, so a whale might exhibit abnormal swimming patterns or lose the ability to swim altogether. It might also have trouble with echolocation.” Watch out, then, for zigzagging whales bumping into stuff. Another classic symptom of rabies infection is hydrophobia, which would be quite difficult for a whale to deal with. “Who knows?” Moore jokes. “Perhaps that’s why whales strand themselves on beaches.”