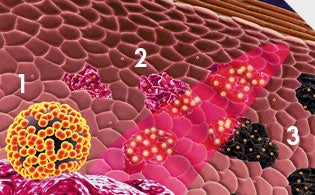 Today’s best cancer treatments destroy tumor cells with about as much precision as an atomic bomb. Now researchers at Rice University are developing tumor-frying “nanoshells” that spare healthy tissue. The treatment, which begins clinical trials early next year, hinges on cancer-specific antibodies glued to nano-scale spheres of glass and gold. Here, a guided tour of how nanoshells will kill cancer inside the body. (1) Each gold-coated nanoshell is about 10,000 times smaller than a white blood cell. To diagnose and treat cancer, a doctor injects thousands of them into the patient’s bloodstream. Dispersed inside the body, the nanoshells seek out and bind to tumor cells via antibodies stuck to their surface. (2) Once roughly 20 nanoshells cover each tumor, a brief exposure to near-infrared light, which passes harmlessly through tissue, illuminates the shells. Next, doctors deliver a more intense near-infrared dose, heating only bound tumors. (3) Free-floating electrons on the outer gold shells concentrate the intensified near-infrared energy, heating each individual nanoshell and cooking the tumor–all during a single visit to the doctor’s office.

Here is the future of cancer treatment as Naomi Halas sees it. During a cancer screening, your physician injects a gold-laden liquid into your bloodstream and shines an invisible light over your body for roughly 30 seconds. She turns to a computer monitor that displays a precision map of the size, shape and location of a newly budding tumor. The treatment? A hardier blast of the same invisible light. By the time you’re back in your car, the growth is history.

Halas’s vision of drive-through cancer treatment may not be far off, thanks in part to her own invention: the nanoshell, a 100-nanometer-wide sphere (roughly 1/10,000 the size of a period on this page) made of layered gold atoms wrapped around a tiny globe of silica. When bound by proteins to a tumor cell and
subjected to rays of near-infrared light, which safely passes through tissue, the shell heats up, cooking the tumor without burning nearby tissue. “It’s just like poaching an egg,” says Halas, an electrical engineer and chemistry professor at Rice University in Houston.

This summer the Department of Defense, which for decades has quietly researched everything from burn treatments to blood preservation, awarded Halas and her colleague Jennifer West, a bioengineer at Rice, $3 million to develop nanoshells as a treatment for breast cancer. Halas says her team hopes to begin preliminary tests next year on patients with soft-tissue tumors, like breast, brain or prostate cancer. If the trials pan out, nanoshells may radically change cancer treatment: Patients could be diagnosed and–for early-stage, contained tumors–treated in the same office visit. “It’s revolutionary in detecting cancer very early, possibly six or seven years before other technologies do,” says Donna Kimbark, grants manager of the Defense Department’s Breast Cancer Research Program. “Most breast-cancer tumors have been there for years before they are detected. Imagine the effect of catching them years earlier.”

What makes the nanoshells remarkable, Halas says, is their “tunability”: A shell can be tuned to absorb almost any wavelength of light by adjusting the thickness ratio between the shell’s inner glass core and outer gold layer. Tuned to capture infrared light and coated with cancer-specific antibodies, the nanoshell becomes a precision-guided thermal bomb (see diagram). A few nearby healthy cells may die, but not nearly as many as would be offed by surgery or chemotherapy.

Halas says nanoshells could also lead to more efficient drug delivery. For instance, attached to an insulin-filled polymer, a nanoshell could trigger the polymer to release tiny doses of the drug into the bloodstream. But right now, it’s the potential to treat cancer that looks most likely to put the shells in the layman’s lexicon–and his body.