Injected straight into the bloodstream 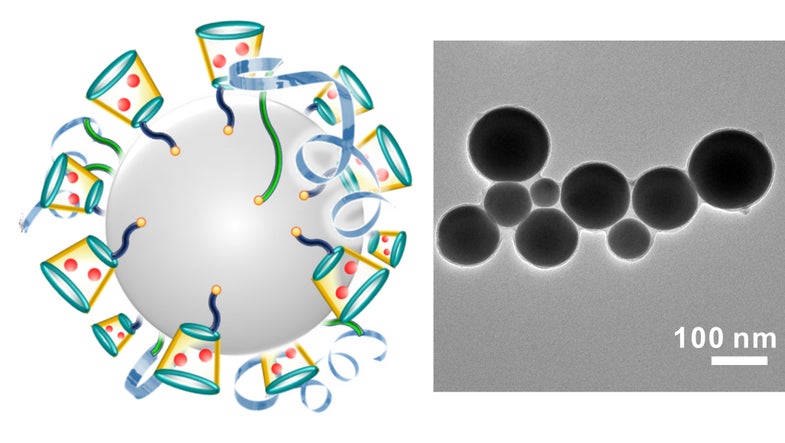 Over the past decade, researchers have developed nanoparticles to treat all sorts of medical conditions, from obesity to bleeding combat wounds. And although researchers have spent a lot of time figuring out how metal-based nanoparticles could diagnose or treat cancer, including types of cancer for which conventional treatments were largely ineffective, many of them were toxic — they would remain in the human body for a long time.

Now a team of researchers has developed metal nanoparticles that are non-toxic and make anti-cancer drugs more effective, according to a study published today in Nature Communications.

The nanoparticles are made of alloyed gallium indium, a metal known to be a stable liquid at room temperature. The researchers used ultrasound to turn the metal into particles each about 100 nanometers in diameter. Then, they used special molecules called “ligands” to stick molecules of doxorubicin, a common chemotherapy drug, to the metal particles.

The particles are small enough to be injected into the bloodstream. As they flow through the body, they encounter tumor cells, which absorb them thanks of another type of ligands on the surface of the metal particles. Most importantly, they don’t have any effect on non-cancerous healthy cells. Once the particles reach a tumor, they collect and form a liquid metal, allowing doctors to easily see them in scans.

The amalgamated metal has ions that that make the chemo drug towed along with the particles more effective. They also degrade the metal itself so that it can filter out of the body more quickly.

Since the nanoparticles are so easy to manufacture, scaling up their production for widespread use wouldn’t be very challenging, the researchers write. This study was a proof of concept, the researchers write, but they hope to start trials in larger animal models—and even in humans—in the near future.