Using Anthrax In The Fight Against Cancer

In the never ending search for cancer therapies, novel technologies are being explored, including the incorporation of the body’s own... 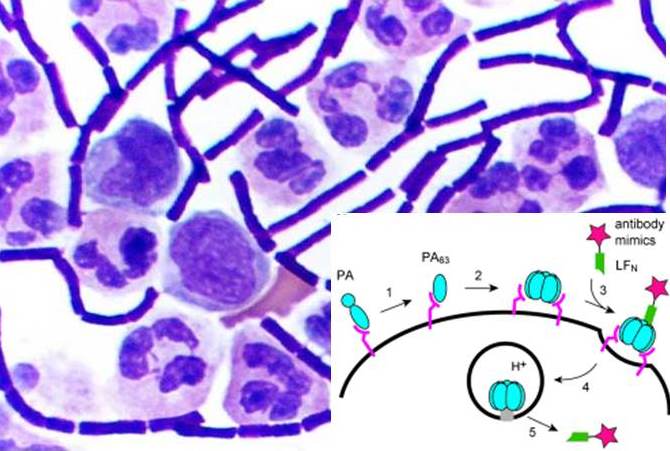 In the never ending search for cancer therapies, novel technologies are being explored, including the incorporation of the body’s own immune system. One particular area of interest has been the use of antibodies to target specific cancer-associated molecules and block their involvement in oncogenic processes. While this has been revealed to be effective against activities outside of the cell, their use has been limited for cessation of intracellular pathways.

To resolve this conundrum, several researchers have explored the use of a novel form of therapy known as immunotoxins. These molecules are a chimera of a functional antibody and a microbial toxin known to assist pathogens to gain entry into the cell. In effect, the antibody would gain access to the cell by hitching a ride with the toxin.

One of the earliest candidates was the toxin from the bacterium Corynebactarium diphtheriae. Originally known for its ability to outright kill a cell, the toxin was considered as a possible therapeutic against tumors. Further investigation into the mechanism of toxicity revealed the diphtheria toxin (DT) actually halted protein synthesis suggesting there might be significant tissue damage during chemotherapy. But this was not the end of the story.

Because DT is made up of several different domains with separate functions, researchers could identify which ones were lethal and which ones were responsible for entry into the cell. This led to the first generation of immunotoxins which consisted of the necessary toxin domain to enter cells bound to an antibody known to block an oncogenic pathway. Though they were rudimentary in design, they provided the base for future generations.

Not long after DT was recognized, other possible options became apparent including Pseudomonas exotoxin (PE) and the biological weapon, ricin. Clinical trials soon followed; yet out of the over 20 candidates tested only one was approved for use. Despite the large number of potential toxins worth investigation, few had any real value when tested. This limitation was due to the need for separate functional regions of the molecule that could act independently of others. The search did find some promising candidates including toxins isolated from the Sambucus elderberry plant, human eosinophils, and chemistry in the form of synthetic inhibitors. But little momentum was gained in this arena.

Last week, however, the momentum resurged. Researchers are the Massachusetts Institute of Technology revealed how they were able to use one of the most feared biological agents known to humanity, Bacillus anthracis, as the base for a novel immunotoxin. Based on the results of their experiments, there is hope this microbial cause of anthrax could help us combat and beat cancer.

The team used a similar technique to other immunotoxin researchers. They first identified the mechanism involved in introducing toxin into the cell. In the case of anthrax, this process followed three-steps. Initially, a molecule known as the protective antigen (PA) bound to the cell and then awaited another molecule, an enzyme called lethal factor (LF). When they interacted, they entered the cell as a single entity. Once inside, the LF broke away from the PA and ventured into the cytosol. There, it could target a number of cellular pathways including immune signaling. When this was tested in the laboratory, the team found they could mimic the natural event without any loss of activity.

The group then attempted to determine if changing the nature of LF through attachment of an antibody, could still promote cellular entry as well as prevent any toxic effects. They were happy to find both happened. When they compared this protocol with the gold standard diphtheria toxin test, they were pleasantly surprised to see the anthrax mechanism was better and lasted longer. With the knowledge the system worked, the group then tested a number of antibodies to determine if this technique could be used with a variety of immunological options. As expected, all antibodies worked effectively; cell death was associated with antibody-use, not the toxin.

The results were not only promising but encouraging. The authors decided this is only the beginning and they will move forward to find ways to improve the system and also increase the breadth of possible antibodies. The efforts will continue to be used primarily in the lab in cell cultures; yet there is little doubt the potential exists for future animal and possibly human studies.

The study also offers a unique perspective on the medicinal potential found in the microbial world. Anthrax has been considered to be solely an enemy of health and a possible agent of terror. While this may be the case; the actual mechanisms of the bacterium when broken down and analyzed can offer new directions for research, development and even innovation. Granted, not everyone may want to jump on board the anthrax train but as more positive results such as this come, there is hope for less concern in the future not only due to the anthrax bacterium, but also due cancer.