Will We Soon Be Able to Fire Laser Beams From Our Eyes?

By day, Seok-Hyun Yun and Malte Gather are physicists at Massachusetts General Hospital. But at night, for the past four... 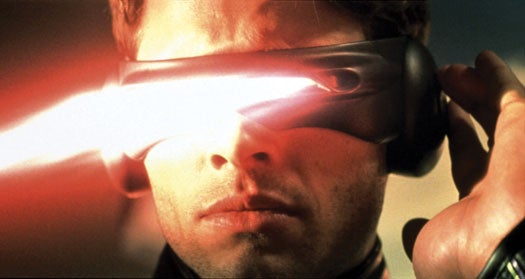 By day, Seok-Hyun Yun and Malte Gather are physicists at Massachusetts General Hospital. But at night, for the past four years, they worked on making a human cell behave like a laser. They built their human laser out of the same three components found in all lasers: a pump source, which provides the initial light energy; an optical cavity, which concentrates the light from the pump source into a beam; and a gain medium, a substance in which electrons are excited until they reach a higher-energy state and simultaneously release that energy as a beam of photons—laser light.

Yun and Gather modified a human kidney cell to produce green fluorescent protein (GFP), the substance that makes jellyfish bioluminescent. This was their gain medium. They cultured these modified cells and placed one between two mirrors, creating the optical cavity—”a cell sandwich,” Yun says. They then sent pulses of blue light from a miniature laser (the pump source) through the cell, where it bounced between the mirrors. The cell glowed green, and light shot out. Through a microscope, the physicists saw a grayish mass (the cell) with luminescent spots (the laser). 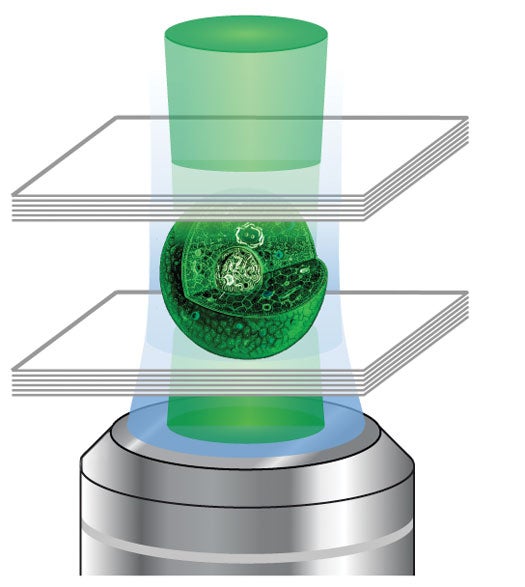 Physicists created a laser by placing mirrors on either side of a human cell and sending pulses of blue light through it. The light bounced back and forth until a laser beam shot out in one direction.

A living laser could be used to activate cancer-treating drugs using photodynamic therapy. Doctors could inject light-sensitive compounds into a patient’s bloodstream to seek out tumors and diseased cells. Normally, such compounds are activated externally, but if both the drugs and the light itself were internal, treatment would be more precise. For now, though, Yun is primarily interested in the possibility of using his human laser to detect slight changes in cells. The intracavity light passes through the cells thousands or millions of times before exiting as a laser beam. Yun says that scientists could use the ricocheting light to monitor cell behavior with unprecedented sensitivity, similar to an intracellular high-speed camera. And yes, he says, his process could one day allow people to shoot laser beams from their eyes, though it would be more flashlight than death ray. “If a light source was implanted in the eye, it might be possible to control it with brain signals.”