For victims of strokes, serious face injuries, or degenerative muscular diseases, losing the ability to blink threatens to compound their... 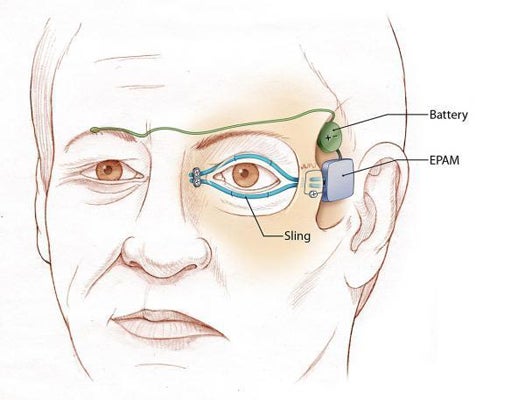 For victims of strokes, serious face injuries, or degenerative muscular diseases, losing the ability to blink threatens to compound their condition with corneal ulcers, or even eventual blindness. To help save the eyesight of people with damaged facial muscles, surgeons at the University of California-Davis Medical Center have developed a bionic eyelid implant that restores blinking ability with an artificial muscle.

The implant centers around electroactive polymer artificial muscle (EPAM), a type of silicon that expands or contracts depending on voltage, just like a human muscle. An EPAM sling lines the eyelids, and when a receiver registers the electrical impulse to the eyelid muscles, an implanted battery signals the sling to flex.

While restoring blinking ability to people with impaired facial muscles will certainly help thousands retain their eyesight, the paper’s authors seem almost as excited about the success of EPAM in particular as they were about the entire implant in general.

As they see it, most facial muscles are so weak in comparison to the body’s other muscles that the success of this implant implies that EPAM could augment or replace any small muscle function. That means not just blinking, but any facial muscle loss in victims of Parkinson’s or ALS, or damage to the fine muscles of the hand, could be fixed with an EPAM bionic implant.