Science On Ice: 7 Antarctic Experiments To Keep An Eye On

Summertime in Antarctica means scientists will be studying penguins, mysterious microbes, and more. 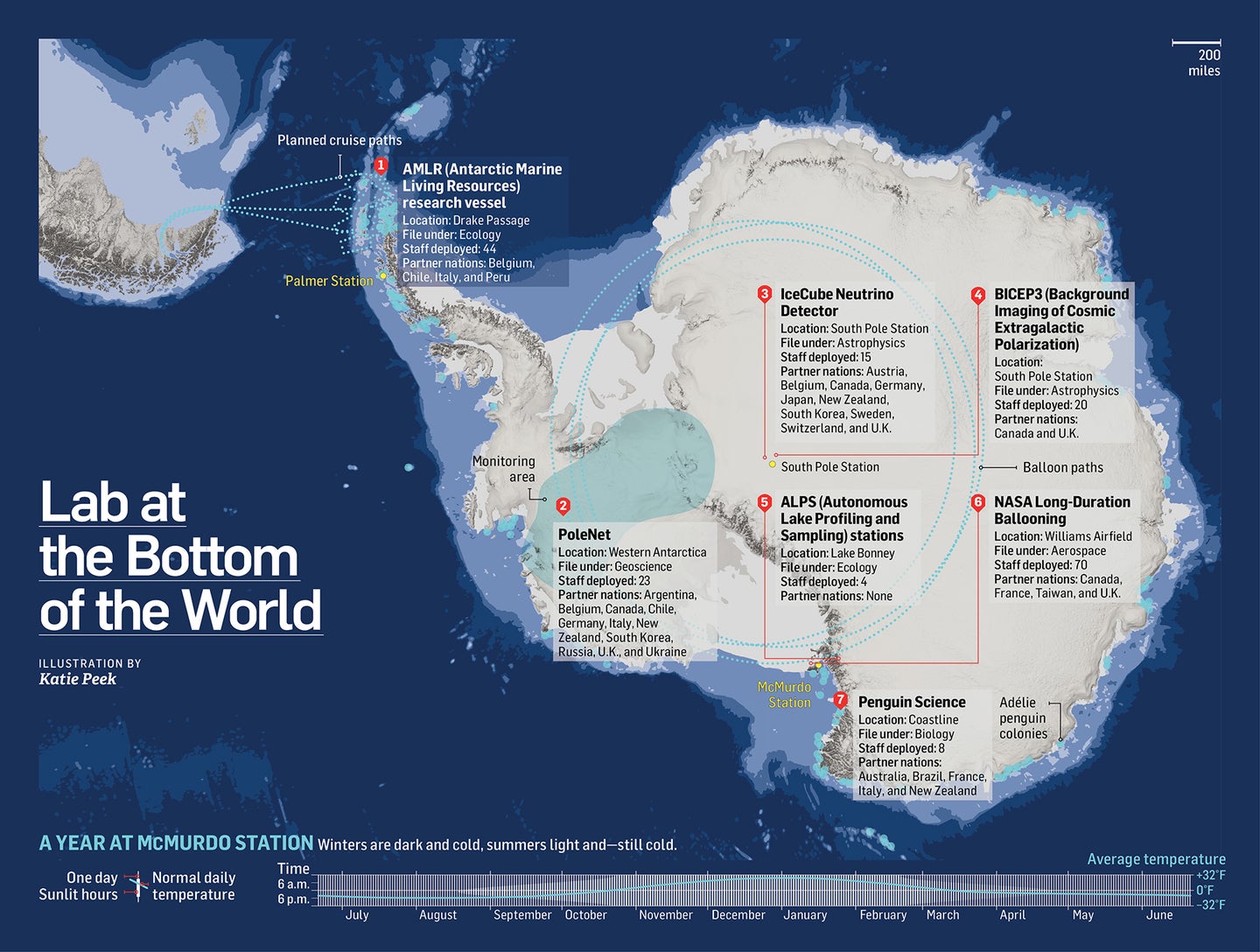 Since the 1950s, a small but growing number of international scientists have spent months at a stretch on the world’s most remote continent: Antarctica. This year, 29 countries will host research programs there, meaning about 800 scientists and support staff will venture south for the summer season, from October to March. The U.S. Antarctic Program alone will field more than 100 projects, many of which will be making up for lost time; sequestration kept some expeditions off the ice in 2013. The U.S.-led projects will investigate a number of critical questions, including how climate change is unfolding and what the earliest moments of the universe were like. Here are seven experiments to keep an eye on.

The Nathaniel B. Palmer, a 281-foot icebreaker-equipped vessel, carries the AMLR team across the sea in search of a two-inch crustacean called krill. Penguins and whales—and humans, too—rely on krill as a food source. After three decades of study, ecologists knew little about their winter patterns. The AMLR team is in the third year of a five-year survey to map the distribution of krill—which like to hide under the sea ice—with acoustic sounding equipment. The work will help the U.S. manage the Antarctic krill fisheries.

GPS and seismic sensors embedded in the Antarctic ice make up PoleNet—the Polar Ice Observing Network—together with sensors in Greenland. This year, the team will add three new stations—each with about 3,000 pounds of monitoring equipment. The data help geoscientists predict how the Earth’s crust will rebound as the Western Antarctic ice sheet melts. The project might confirm whether the melting is a runaway process—as other researchers found earlier this year—and if the rebound could lead to earthquakes and volcanic eruptions.

Astronomers have been trying to detect neutrinos, the elusive particles whose signatures help them understand mysteries like how supernovae work and what dark matter is, for decades. Traditional neutrino detectors, like Super-Kamiokande in Japan, are water tanks built into abandoned mines. But researchers on the IceCube team figured out how to make a detector 20,000 times bigger than Super-Kamiokande, for just twice the price. Instead of tanks, they use a cubic mile of near-perfectly-transparent ice of Antarctica, with 5,160 optical sensors drilled more than a mile deep. More than 30 neutrinos have been picked up since the detector started operation in 2010. This year, the team will be testing the computers they installed last year in an effort to make the detector more autonomous, and hope to find evidence for where in the universe neutrinos originate.

In March, cosmologists reported a major result from the BICEP2 telescope: evidence of the once-speculative theory of inflation, the violent expansion of the universe the instant after the Big Bang. But extraordinary claims require extraordinary evidence, and other astronomers have called for more research to repeat—or disprove—the experiment. This season, BICEP3 deploys. With five times more sensors than its predecessor and triple the field of view, it should help confirm or deny the BICEP2 finding.

5 – Microbes In The Dark

Biologists know little about how microorganisms that rely on the sun for energy also survive dark polar winters. So the ALPS team has set up sensor stations in two ice-covered lakes, each equipped with algae detectors, phytoplankton samplers, and water chemistry analyzers for year-round data collection. This season, the team gets a first look at over-winter data. The results could help astrobiologists predict whether similar microbes might survive on other ice-covered bodies like Jupiter’s moon Europa.

Because Antarctica sits right at the pole, Earth’s otherwise chaotic atmosphere is stable and predictable there. That means giant balloons—some are wider than a football field and as tall as the Washington Monument—can circle the continent but still land close to their launch point. This season, the Long-Duration Ballooning team’s payload is a 1,700-pound gamma-ray telescope, sent up to watch stars that the atmosphere conceals from the ground. The technique yields spacecraft-quality research trips for a fraction of the space-launch price tag.

Because penguins are a key predator, they indicate how the Southern Ocean ecosystem is adapting to climate change. The Penguin Science team is using a 45,000-year record of bones and eggshells preserved in the Antarctic ice—along with data from 15 years of banding live Adélies—to decipher how the species is adapting today. This year, the team will focus on whether birds’ foraging prowess is a learned skill or inherited trait—and whether the ability will survive as sea ice melts.

Plus, McMurdo Station Gets A Makeover

The National Science Foundation is planning a multiyear upgrade to McMurdo Station, the largest and most active base on the continent. Potential overhauls include replacing many of its 100-plus structures, adding new wind turbines, increasing bandwidth, and upgrading instruments for Crary Lab, the main research facility. Technicians may even receive a DARPA-style research wing—dedicated to the development of advanced gliders, robotic field stations, and automated traverse vehicles, all purpose-built for polar expeditions.

Correction (9/22/2014, 7:30 p.m. ET): The original version of this map mislabeled the two Autonomous Lake Profiling and Sampling stations as being in Blood Falls and Lake Whillans. Both are at Lake Bonney, near McMurdo Station. The map has been corrected. We regret the error.

This article originally appeared in the October 2014 issue of Popular Science, under the title “The Lab At The Bottom Of The World”.