No, those aren’t horns in the upper right 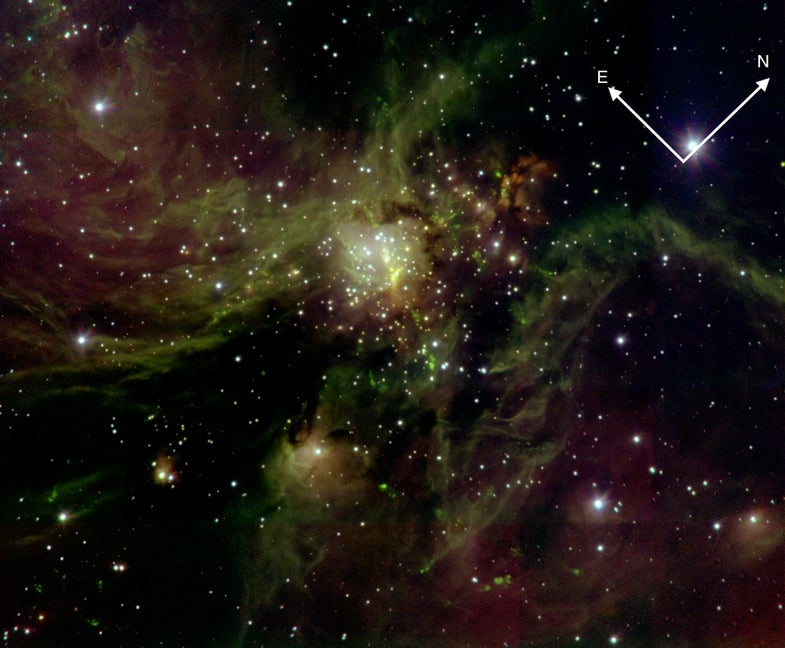 A new instrument with an evil-sounding name is helping scientists see how stars are born. Lucifer, which stands for (deep breath) “Large Binocular Telescope Near-infrared Utility with Camera and Integral Field Unit for Extragalactic Research,” is a chilled instrument attached to a telescope in Arizona. And yes, it’s named for the Devil, whose name itself means “morning star.” But it wasn’t meant to evoke him, according to a spokesman for the University of Arizona, where it is housed.

The instrument is chilled to -213 Celsius, about -351 F, to allow for near-infrared observations. That wavelength is important for understanding star and planet formation, as well as observing very distant and very young galaxies. Lucifer has three interchangeable cameras for imaging and spectroscopy in different resolutions. It has a large field of view and high-res capabilities, which allow a wide range of observations.

Lucifer is part of the Large Binocular Telescope, which happens to be right next to the Vatican Observatory on Mt. Graham in Safford. That’s right, the Vatican has an observatory in Arizona, manned by Jesuit astronomers. Now its next-door neighbor is named for the Devil.

Scientists at five German universities designed the instrument, and they came up with the name, according to Daniel Stolte, a spokesman for the University of Arizona. Stolte—who is German—explained that the team was tossing around names, looking for an acronym that would fit all the technical terms.

“In Germany, they wouldn’t have the same hesitation that Americans would have, since it’s a very secular country,” he said. “I may be completely off, but that’s just my hunch—for us Germans, Lucifer just sounds cool. It’s more historical than emotional.” No matter your religion, the photos are certainly cool.

Correction: The Vatican Observatory is in Safford, Arizona, not Tucson as previously written in the article.