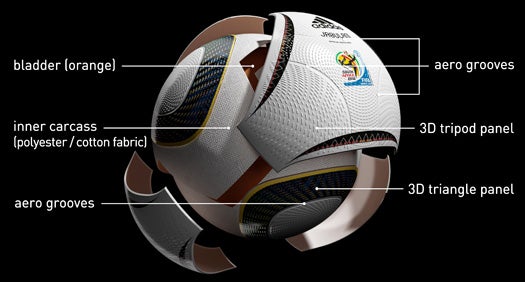 While the sporting world watched the clock for the high noon announcement of the brackets for the 2010 World Cup in South Africa, we were salivating over another four-year tradition: the engineering and innovation that goes into the official World Cup ball. With the 2010 Cup’s Jabulani ball (‘to celebrate’ in isiZulu), Adidas claims it has surpassed its own Teamgeist from 2006 in constructing the roundest and most accurate ball ever played. See how it’s made inside.

And you thought a ball was just a ball? From the iconic 32 panel black and white Telstar introduced in Mexico City in 1970 to the latest unveiled today for South Africa, the goal for Adidas, naturally, has always been to build a better ball. Soccer players want a ball that feels good on the foot and flies predictably no matter where on the ball it’s struck. Teamgeist achieved its improvements by reducing the number of panels from 32 to just 12, by thermally bonding the panels thereby eliminating inaccurate stitching and by forming the outer panels in 3-D versus making them flat and bending them into shape. 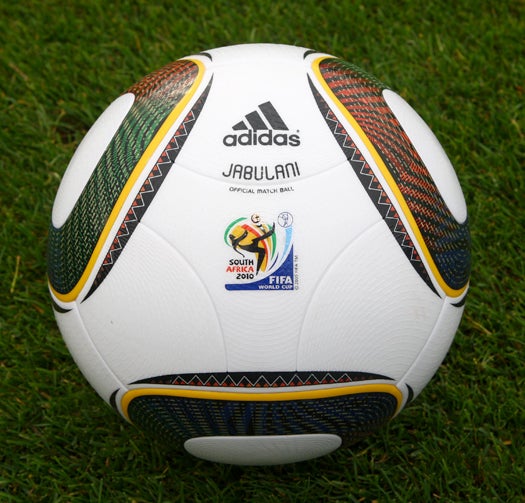 Jabulani, All in One Piece

Chelsea FC players are presented with the World Cup 2010 official match ball, the Jabulani at the Chelsea training ground, London. Photo by Getty Images for adidas

Jabulani takes another step towards perfection with just eight EVA and TPU panels that provide a 70% larger striking surface due to fewer seams. While the Teamgeist ball was great for strikers, many goal keepers complained that the ball’s aerodynamics created a lack of rotation in the air, making its path at times erratic, like a knuckleball. Jabulani attempts to stabilize the flight pattern of the ball through what Adidas is calling ‘aero grooves’, essentially long indentations along the panels. The grooves divide the ball up into additional pseudo-panels but by molding the grooves Adidas can achieve consistent location and shape to achieve optimal flight. The surface of the ball has also been covered with raised nubbins to help with tactile feel on the foot.

While Adidas would not provide numerical flight data, it claims that robotic kicking and wind tunnel testing at Loughborough University in England and at its own football lab in Germany show that Jabulani is its most accurate ball. To be sanctioned FIFA Approved, a ball is only subject to a handful of more static tests, which the Jabulani ball obviously meets.

• Uniform Rebound: The only dynamic FIFA test, the ball is dropped ten times onto a steel plate from a two meter height. The difference from the lowest to the highest bounce can be no more than 10 cm. Jabulani bounced in a range from 143 to 149 cm.

For a unique look into complex manufacturing steps to create the ball, see the video below.