A Cannon for Shooting Supplies into Space

John Hunter wants to shoot stuff into space with a 3,600-foot gun. And he’s dead serious—he’s done the math. Making... 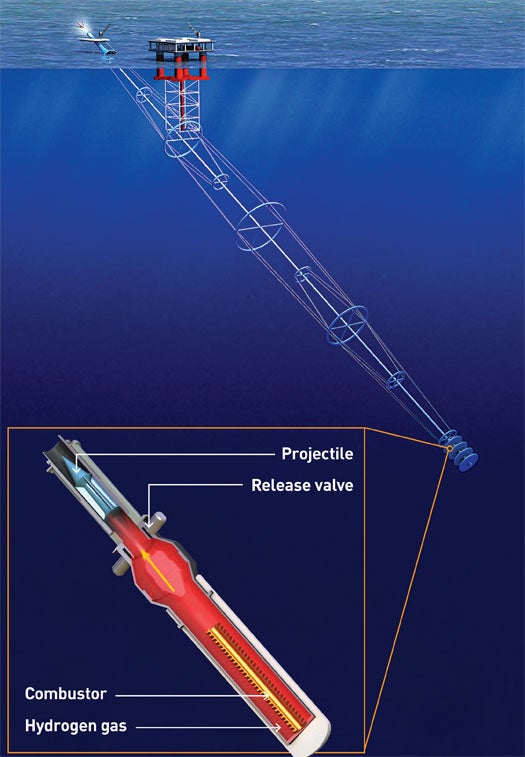 John Hunter wants to shoot stuff into space with a 3,600-foot gun. And he’s dead serious—he’s done the math. Making deliveries to an orbital outpost on a rocket costs $5,000 per pound, but using a space gun would cost just $250 per pound.

Building colossal guns has been Hunter’s pet project since 1992, when, while a physicist at Lawrence Livermore National Laboratory, he first fired a 425-foot gun he built to test-launch hypersonic engines. Its methane-driven piston compressed hydrogen gas, which then expanded up the barrel to shoot a projectile. Mechanical firing can fail, however, so when Hunter’s company, Quicklaunch, released its plans last fall, it swapped the piston for a combustor that burns natural gas. Heat the hydrogen in a confined space and it should build up enough pressure to send a half-ton payload into the sky at 13,000 mph.

Hunter wants to operate the gun, the “Quicklauncher,” in the ocean near the equator, where the Earth’s fast rotation will help slingshot objects into space. A floating cannon—dipping 1,600 feet below sea level and steadied by a ballast system—would let operators swivel it for different orbits. Next month, Hunter will test a functional, 10-foot prototype in a water tank. He says a full-size launcher could be ready in seven years, provided the company can round up the $500 million. Despite the upfront cost, Hunter says he has drawn interest from investors because his reusable gun saves so much cash in the long haul. Just don’t ever expect a ride in the thing: The gun produces 5,000 Gs, so it’s only for fuel tanks and ruggedized satellites. “A person shot out of it would probably get compressed to half their size,” Hunter says. “It’d be over real quick.”

How to Shoot Stuff into Space

STEP 1: HEAT IT
The gun combusts natural gas in a heat exchanger within a
chamber of hydrogen gas, heating the hydrogen to 2,600˚F and causing a 500 percent increase in pressure.

STEP 2: LET THE HYDROGEN LOOSE
Operators open the valve, and the hot, pressurized hydrogen quickly expands down the tube, pushing the payload forward.

STEP 3: TO INFINITY AND BEYOND
After speeding down the 3,300-foot-long barrel, the projectile shoots out of the gun at 13,000 mph. An iris at the end of the gun closes, capturing the hydrogen gas to use again.