The Big Question: Why are galaxies moving toward the same point, as if pulled by an unknown force? 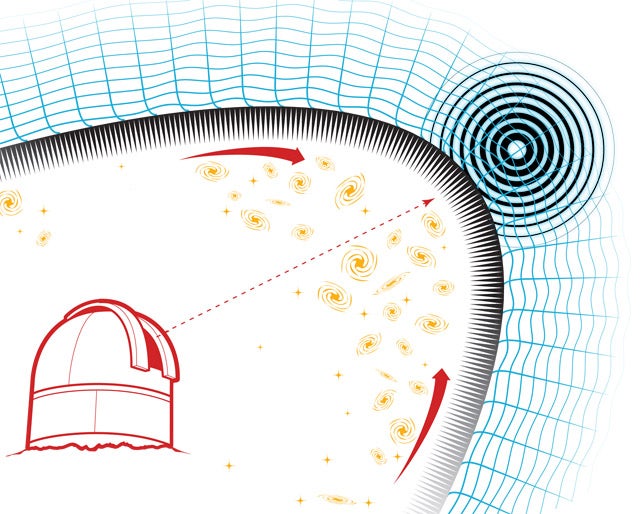 As if the universe weren’t strange enough, scientists have recently discovered that entire galaxy clusters—the largest known structures in the universe, consisting of thousands of galaxies—are moving toward the same area. And we have no idea what mysterious phenomenon is drawing them along. Whatever it is, it’s huge. So far, cosmologists’ best guess is that it’s the gravitational pull from something beyond the visible universe. NASA scientist Alexander Kashlinsky and a team of researchers discovered the mystery motion, dubbed “dark flow,” last year. Dark flow joins other cosmological mysteries, including dark matter and dark energy, none of which are easily explained by Einstein’s general theory of relativity, our current best theory of how gravity and the universe itself work. Solving even one of these riddles could turn physics on its head.

Dark Matter is the name of the invisible mass that creates the gravity required to hold galaxies together.
Dark Energy refers to the force that’s causing the universe to expand far more rapidly than math suggests it should.

Visible Universe: In the first 380,000 years after the big bang, any photons created were immediately re-absorbed, which means there was no light in the universe. Because light takes a certain amount of time to reach us, that 380,000-year period is the wall that determines how far into the past, and thus how far out in space, we can see. Although it’s probably impossible to directly observe anything beyond the visible universe, phenomena like dark flow, which may show the influence of very distant structures on the universe we can see, can help us reconstruct what’s out there.

46.5 Billion Light-Years: If Kashlinsky is correct, that’s at least how far away the source of dark flow lies from Earth. The most distant object ever observed was a gamma-ray burst from a dying star 13 billion light-years away.

Scientists will try to figure out if all galaxy clusters are susceptible to dark flow. If so, we’d know that its cause stretches back to our universe’s beginning, lending credence to the theory that something we can’t see is exerting its gravitational force on everything we can see.

How to Find Dark Flow

Alexander Kashlinsky and his NASA team discovered dark flow by studying the cosmic microwave background (CMB). The CMB is electromagnetic radiation born from the big bang that blankets everything in the known universe like a uniform layer of static. When a galaxy cluster—a group of thousands of galaxies—moves through space, it drags high-energy electrons with it. These scatter the CMB radiation, disturbing it like the wake of a boat disturbs a lake. By searching for this disturbance, Kashlinsky’s team found evidence that all of the clusters they studied were moving toward a single point. They can’t see anything that would cause this bulk motion, so it may suggest that there is a very massive structure lurking beyond the edge of the visible universe pulling the galaxies toward it with its gravity.

So where is this big invisible thing? The latest cosmology models tend to assume that the universe is infinite and it’s just that we can only see part of it. Dark flow gives the first hint of what else might be out there, beyond the bounds of what can be observed directly from our solar system. It will be hard to learn more, though, since the source of the dark flow appears to be at least 46.5 billion light-years away, much farther than we can observe. Instead of trying to figure out how to peer beyond the visible universe, cosmologists are testing computer models of the universe’s evolution to pursue a possible cause of dark flow. Kashlinsky’s team is studying a new batch of data on the CMB and more galaxy clusters to refine their numbers. The more precise the observations, the better that theorists will be able to run simulations and test their ideas about what could be behind the mystery motion.

Q. Where are the galaxies going?
A. Cosmologists think the galaxies could be heading toward a very large primeval structure, but so far they aren’t speculating on what that might be. All the motion they’ve observed has been toward a 20-degree region of the sky, between the constellations Centaurus and Vela, so the unknown could be in that area.

Q. Is this mystery motion the same as dark energy and dark matter?
A. Only in that they’re all mysterious forces. Fritz Zwicky discovered dark matter in 1933 when he measured the speed of galaxies orbiting in the outer edges of galaxy clusters. He found that there is too little visible mass in a cluster to produce the gravity required to keep the galaxies from flying off into space. The theoretically missing mass is called dark matter. Astronomers believe there is about five times as much dark matter in the universe as ordinary, visible matter.

The notion of dark energy came about in 1998, when scientists discovered that the universe is not only expanding, but it’s doing so faster than ever before. Physicists refer to whatever is powering this accelerated growth as dark energy. They estimate that the universe needs about three times as much energy as is stored in all known visible and dark matter combined to expand at its current rate.

Q. Could all these “dark” phenomena have the same cause?
A. It’s unlikely. We could account for dark energy and dark matter by modifying our theory of gravity, or we could find new particles that explain them. But the particles would have to be different: Dark matter would require weakly interacting particles clustered within galaxies, while the particles causing dark energy would need to be distributed throughout the entire universe.