FYI: Would a Helium-Filled Balloon Float on the Moon?

A helium balloon on the moon might as well be made of lead. For any balloon to stay aloft in... 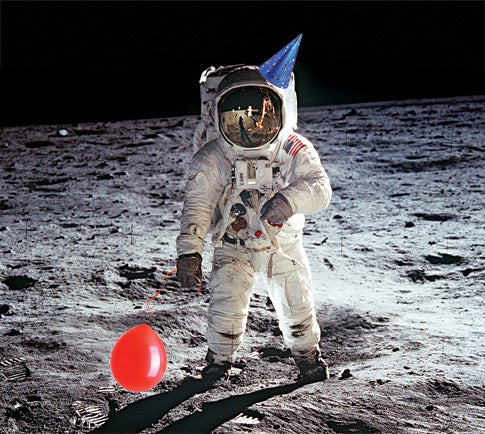 A helium balloon on the moon might as well be made of lead. For any balloon to stay aloft in any atmosphere, the gas inside it must be lighter than the surrounding air.

Ultralight helium has no trouble climbing in Earth’s atmosphere, which consists mostly of heavy molecular nitrogen and oxygen. “But on the moon, there is no air, so there’s nothing for the helium to rise above,” says Marc Rayman, an engineer at NASA’s Jet Propulsion Laboratory. Unable to escape even lunar gravity, which is one sixth that of Earth’s, the balloon would plunge to the ground.

Try throwing a birthday party on the International Space Station, and you’ll run into the opposite conditions. Because atmospheric pressure in the station is kept the same as at sea level on Earth, a helium balloon would have the support it needs to float, but with almost no gravity on the station, there is no force to push up or down on the balloon. “It would just hang there, the same as if you let a hammer go,” Rayman says.

If you’re looking to throw an extraterrestrial fiesta for an astronaut, book a spot on Mars. The thin air on the Red Planet is still heavier than at the highest altitudes on Earth where balloons have floated. That, combined with gravity that’s about a third of Earth’s, would send a helium balloon on Mars up and away.

Have a burning science question you’d love to see answered in our FYI section? Email fyi@popsci.com