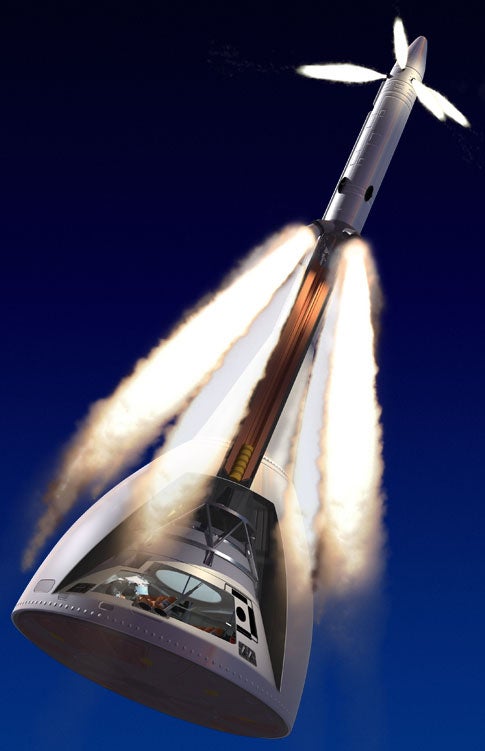 As early as 2015, the Ares 1 rocket, carrying the Orion crew capsule, could replace the space shuttle. With more than two and a half times the interior space of Apollo-era crew capsules, Orion can deliver a crew of six to the International Space Station and up to four astronauts to the moon. And if something goes wrong within the first 300,000 feet of the rocket’s ascent, the Launch Abort System (LAS) will whisk the astronauts to safety.

Step one: The abort motor fires and generates 400,000 pounds of thrust, shooting the Orion capsule up and away from the rocket, reaching 450 mph in less than three seconds. The hot gas from the engine is forced through a 155-degree turn in the motor’s titanium manifold so that it exits through nozzles at the front of the motor, directed at an angle that keeps it from directly hitting the crew capsule. A fiberglass cover protects the capsule further.

After the abort motor burns out, the LAS coasts, guided by the attitude-control motor. The engine’s small nozzles, arranged in a ring around the LAS’s tip, fire according to an autonomous flight computer to reorient and steady the spacecraft. The attitude-control motor is capable of spinning the LAS around in any direction—whatever it takes to get it upright and steady in preparation for the next step.

About five seconds after the LAS reaches the proper orientation, a third motor fires to pull the spent abort system away from the crew capsule; explosive bolts separate the two. Parachutes deploy in three stages from the capsule to slow its descent to Earth. Ideally, the capsule will land in the ocean. If it hits solid ground, the Orion capsule will crumple to absorb the blow, and the astronauts’ shock-absorbing seats will keep them safe. Scared to death, but safe.

From Liftoff to Landing 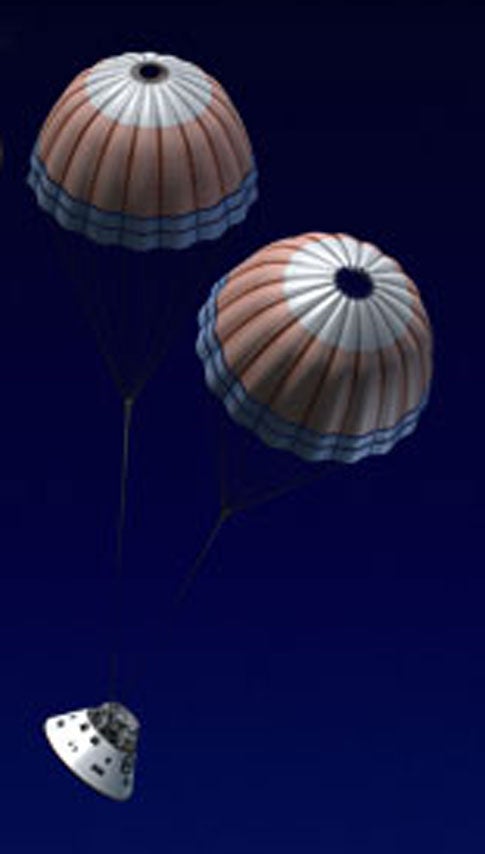 When the crew capsule enters a safe altitude, parachutes open up to help humans land safely

Ejection Seat
If something goes wrong during the takeoff of NASA’s new Ares 1 rocket, the dart-shaped Launch Abort System (LAS) atop the Orion crew capsule will lift the astronauts to safety.

Solid Propellant
All 4,700 pounds of fuel in the abort motor burn in less than three seconds—about three times as rapidly as in the space shuttle’s boosters.

Boost Protective Cover
This surrounds the Orion crew capsule and shields it from the hot engine exhaust.

Orion Crew Capsule
While launching away from a failing Ares 1 rocket, the four to six astronauts in the crew capsule could experience up to 11 Gs.

Abort Motor
Exhaust vents through nozzles at the front of the abort motor.

Altitude-Control Motor
A ring of nozzles at the rocket’s tip fire to stabilize and reorient the LAS.

Jettison Motor
A third motor fires to pull the spent LAS away from the crew capsule. Explosive bolts separate the two units.

Three-stage Parachutes
Once the capsule reaches a safe altitude, a series of parachutes deploys and brings the crew back to Earth.

Check out the most powerful drill, the tallest mobile crane, and more, in Popular Science‘s special feature on How It Works!