The moon may be a harsh mistress, but lately she has been giving up her secrets. Scientists have spotted a... 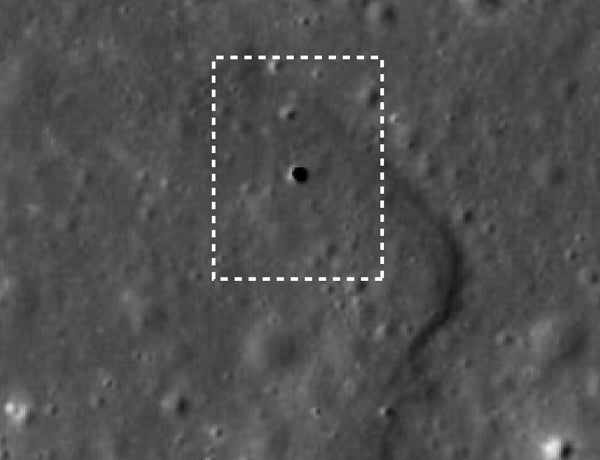 The moon may be a harsh mistress, but lately she has been giving up her secrets. Scientists have spotted a deep hole in the lunar surface that goes at least 260 feet down and is believed to open into an underground tunnel more than 1,200 feet wide.

The discovery is powerful evidence for long, winding tunnels carved by lava beneath the lunar surface. Such tunnels, whose existence has long been hypothesized, could provide shelter for future astronauts or colonists against the harsh radiation and surface temperatures on the moon.

Previous signs of such tunnels only existed as surface features called rilles, which hinted at hollow lava tubes below. Researchers only found the hole by poring through images taken by Japan’s deceased Kaguya lunar probe.

Scientists told New Scientist that rubble or solidified lava may have blocked off much of the underground tube. But the Kaguya team continues to search for more openings, and NASA’s Lunar Reconnaissance Orbiter could also begin snapping new shots of the area that are 10 times sharper.

So let’s get this all straight. Water on the moon, check. Supergun concepts for space launches, check. And then there’s the underground tunnels for colonists. All we need now is a reality show: Robert Heinlein’s Survive the Moon.