The Age Of Telekinetic Cyborg Monkeys Is Upon Us

Last year, a monkey managed to move a robot arm using nothing but its mind. The arm was wired to... 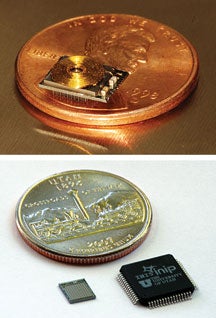 Last year, a monkey managed to move a robot arm using nothing but its mind. The arm was wired to the monkey’s brain, and the simian test subject maneuvered the arm as if it was its own appendage. Where do you go from there? Apparently, you go wireless.

A team at the University of Utah has created a brain chip that uses broadband RF to communicate with machines. Without wires to tangle up with each other, the wireless brain implants can cover more of the brain than their wired counterparts, thus providing more function and more control.

The wireless brain implant represents a breakthrough in cooling technology. Beforehand, the electricity needed to power the wireless signal would heat the implants up so much they would fry any neurons they touched. Now, the University of Utah team has managed to keep the implants cool enough to allow the monkey’s brain to go Wi-Fi.

The researchers hope that the wider range of movement enabled by brain implants without cumbersome wires will one day allow humans to operate their robotic limbs during physical activities like dance and sports. Or, we could all get the implants and log into the Matrix without that pesky plug in the back of the head.