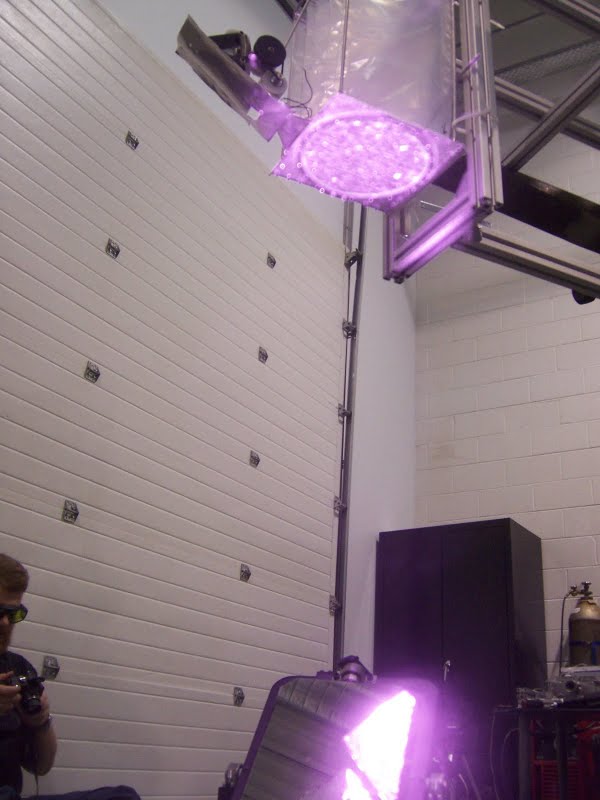 NASA has again thrown down a $2-million space elevator challenge that Scotty of Star Trek fame would relish. Three teams must somehow move vehicles up a 1-kilometer tether by using only energy beamed to the vehicle from the ground.

Space elevators have long bedazzled scientists and science fiction writers as a way to cheaply move cargo and humans to low-Earth orbit. Many concepts envision giant tethers attached from the ground to orbital platforms, which robotic vehicles can use to move up and down.

The latest space elevator (or power beaming) challenge is scheduled for Wednesday, November 4. All the contestant teams have settled on lasers to beam power up to the vehicles climbing ever higher on their tethers. Helicopters have already begun practicing how to hover in place and hold the kilometer-long tethers for contestants.

The competitors include: Lasermotive, an “industry” team led by laser expert Jordin Kare and based in Seattle; USST, a highly professional university student team from Saskatoon, Canada that has outperformed the competition in previous contests; and Kansas City Space Pirates (KCSP), a group of robot hobbyists who consistently display excellent engineering and have a panel of skilled consultants.

A fourth team, National Space Society, withdrew from the competition at the end of last week after running short on time and money. It first tried designing an ambitious thermal receiver for their vehicle based on a Stirling engine, but ran into problems with weight, sealing in the working helium fluid, and dealing with waste heat. NSS then ran out of time and funds while going with plan B – a photovoltaic receiver that would convert the laser beam into electric power to drive their vehicles motor.

This represents yet another of NASA’s “Centennial Challenges,” which have included competitions for lunar digging robots among other extreme engineering contests. But no one has claimed the $2-million top prize for the space elevator challenge since it began in 2005.