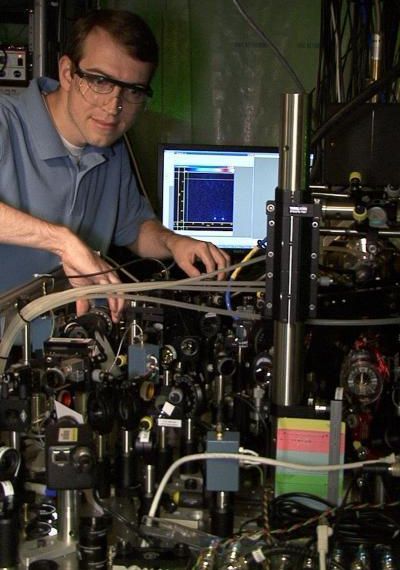 Physicists have been taking baby steps toward creating a full-fledged quantum computer faster and more powerful than any computer in existence, by making quantum processors capable of performing individual tasks. Now a group at the National Institute of Standards and Technology (NIST) has developed the world’s first universal programmable quantum computer that can run any program that’s possible under the rules of quantum mechanics.

Quantum computing takes advantage of the bizarre physics operating at the subatomic level, such as Einstein’s “spooky action at a distance,” wherein two particles become “entangled” and can affect one another even across vast distances of space. Quantum processors store information as quantum bits, or qubits, that can become entangled. Unlike traditional computers that can only process information as either 1s or 0s in binary computer language, the qubits of quantum computing can also represent the state of both 1 and 0 at the same time.

NIST’s achievement marks the first time that scientists have created enough inputs and continuous steps to perform programmable processing in a basic quantum computer. The team’s computer uses laser pulses to manipulate spinning beryllium ions so that they carry out computer processing, while a separate laser helps interpret the results as calculations.

Early quantum computing theory showed that an infinite number of two-qubit operations exist, and so the NIST team tested just 160 programs 900 times each. The processor worked as intended, but only with a 79 percent accuracy rate — still below the 99.99 percent rate necessary for a reliable quantum computer.

Researchers hope to boost that accuracy rate by improving their lasers and hardware precision. For now, everyone else need not throw out their supercomputer clusters anytime soon.