While Robert Frost famously said that he prefers the world to end in fire, physicists have long predicted the universe... 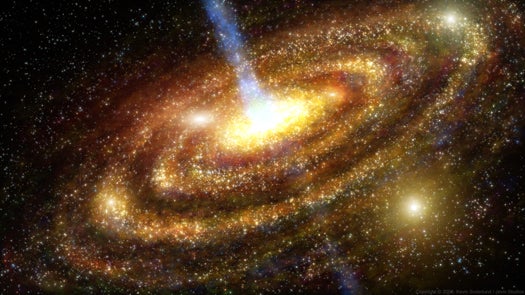 While Robert Frost famously said that he prefers the world to end in fire, physicists have long predicted the universe will end with an icy sputter known as “heat death.” Heat death occurs when the universe finally uses up all its energy, with all motion stopping and all the atoms in creation grinding to a halt. And, based on new calculations from a team of Australian physicists, it looks like heat death is far closer than previously thought.

Heat death is based on the concept of entropy, which holds that disordered states are more stable than ordered states. We experience entropy in real world examples like a glass window being easier to break than to reassemble or create anew. On the scale of the universe, complex systems like stars, planets and galaxies are the glass window, and the Australian physicists have found that supermassive black holes are breaking them faster than we could have imagined.

Physicists have always known that black holes contribute to entropy in the universe by breaking down matter and energy in their gravitational maelstroms, but the calculations always measured the rate of this disorder using the destructive power of the smaller, more common black holes.

However, this new calculation takes into account the galaxy-consuming hunger of super massive black holes. And in this new calculation, the physicists discovered that the old theory vastly underestimated how much of the universe has already been eaten.

On a human scale, say a person can only reasonably expect to live 90 years. This new calculation reveals the age of the universe to be closer to 90 than 50. But don’t worry. Since both estimates place heat death billions of years away, the universe still has a long time to enjoy its AARP discounts before having to face the galactic health care death panel.

[via US News and World Report]