After six months of testing and very careful calibration, the European Space Agency’s GOCE satellite is sending back its first... 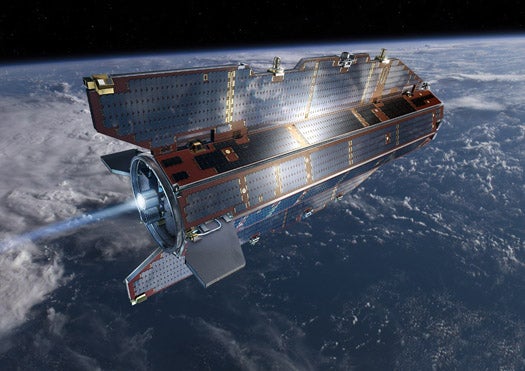 After six months of testing and very careful calibration, the European Space Agency’s GOCE satellite is sending back its first data sets as it now begins precisely mapping tiny variations in Earth’s magnetic field. How does one go about mapping the Earth’s fundamental force? As it turns out, very, very carefully.

The Gravity field and steady state Ocean Circulation Explorer launched from Russia in March with the aim of creating a better understanding of Earth’s gravity and in turn the natural processes of our planet. Though gravity obviously exists everywhere on the planet, it is not distributed evenly across the planet’s surface. Geological differences like mountains or ocean trenches, density variations within the Earth’s crust and mantle, and the rotation of the Earth can cause slight changes to gravitational force. Knowledge of these changes is crucial to accurately measuring ocean circulation and sea levels. 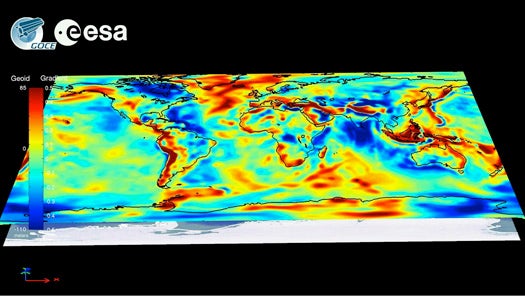 GOCE’s final map will look something like the one shown here, representing Earth’s gravity distribution with unprecedented accuracy and spatial resolution.

But precise maps call for precise measurements, and mapping the Earth’s gravitational fluctuations from nearly 160 miles up is more than challenging. Because gravity is stronger closer to Earth, GOCE needs to be as close to the surface as possible. However, because the instrumentation aboard GOCE needs to be as stable as possible to measure accurately, an environment with no aerial drag is ideal. The GOCE team compromised between these contrary conditions by creating a sleek, aerodynamic satellite boasting a unique propulsion system that orbits a mere 158 miles up, extremely low for an earth observation satellite but far enough up to eliminate most drag.

Because GOCE is so low, it’s actually riding along the fringes of the atmosphere. It’s aerodynamic design helps it cut through any remaining air there, but sleekness alone isn’t enough. The gravity measurements require the craft remain stable in free fall; any interference from air at this altitude could skew the gravity data and jeopardize the mission’s quality. So GOCE was fitted with an electric ion thruster that continuously offers tiny bursts of thrust to compensate for any drag the satellite encounters.

The calibration for such an undertaking took several months as the GOCE team commissioned the instruments and eased the satellite from its original orbit just over 170 miles up down to its current altitude of 158 miles. Both the space gradiometry and the drag reduction via ion propulsion are technologically unprecedented, and the timing couldn’t be better for GOCE’s next first: the precision mapping of the planet’s gravity. The lack of solar activity right now makes for perfect atmospheric conditions for gravity mapping, meaning the initial data coming down from GOCE is even more accurate than researchers were anticipating.

What do researchers get for all this painstaking precision? With an accurate map of Earth’s gravity in hand, scientists will be able to better measure ocean circulation and sea levels, which in turn will tell us more about climate change. In addition, data from the GOCE will hopefully shed light on some of Earth’s geological processes that take place deep within its interior, as well as for more pragmatic undertakings like surveying and leveling building projects.