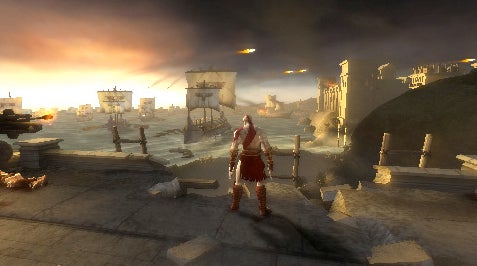 Party in your pants! Given excitement levels surrounding set-top systems like the Wii and Xbox 360, enthusiasts often forget several of today’s most advanced gaming platforms actually fit in your pocket. With spring here, it’s worth reiterating a few ways vacationers can enjoy a little fun on the run, even while braving the horror of direct sunlight.

Sony’s PlayStation Portable (PSP) has been making headlines lately mostly for players’ lack of enthusiasm for the system, and its proprietary UMD disc format. But with support for Skype calling, watching videos stored on a PS3 remotely over the Internet, and online game downloads, the console remains one of the most versatile hand-helds.

As much a gonzo art experiment as it is a compelling blend of action and strategy, Patapon 2 is also a must-have. What’s not to love about a game where keeping the beat with pounding drums causes silhouettes of one-eyed tribesmen to engage in heated combat?

Meanwhile, the gesture-tracking and tilt sensor-equipped iPhone continues to grow in popularity amongst gaming aficionados. Credit on-demand software delivery from the App Store, which now boasts over 6,000 titles from empire building challenges such as Lux Touch to addictive arcade outings, i.e. Rolando, and complex civil engineering simulations like SimCity.

The coming iPhone 3.0 software update should also add major features from a player’s perspective. New capabilities include using Bluetooth for multiplayer connectivity, sending play invites to friends, and purchasing new items such as vehicles and weapons from within games. Coming this summer, it’s just one more reason why even chronically addicted fans can look forward to their next business trip or seaside getaway.

Even everyday cell phones from manufacturers like Sprint, Motorola, Nokia and LG can double as portable arcades. Given the option to download titles like Diner Dash and The Oregon Trail anytime, anywhere, who knows? You might even be able to step away from the couch long enough to (gasp!) get a tan.