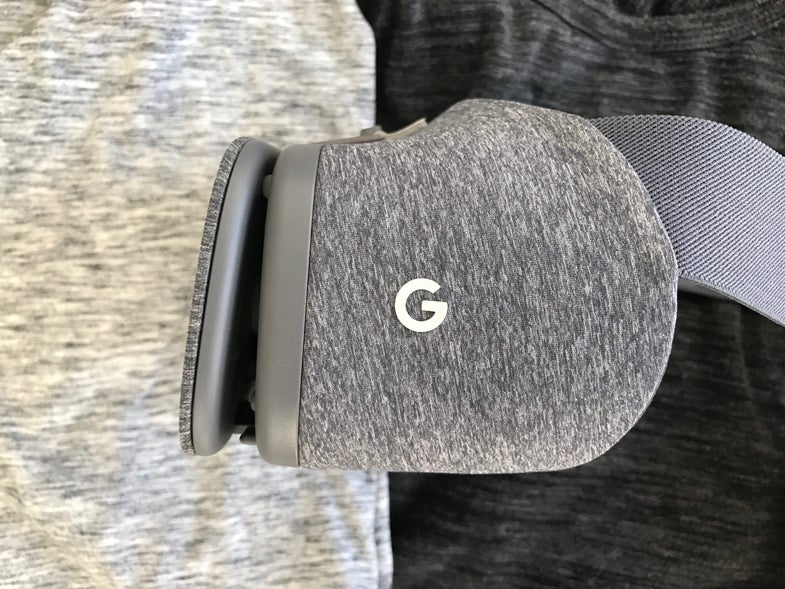 This comfy VR headset is the sequel to Google Cardboard. Xavier Harding
SHARE

More than two years after releasing the $15 Google Cardboard—a rudimentary VR headset made with plastic lenses, magnets, and a corrugated cardboard shell—Google is unleashing its next act. Cardboard was Google splashing around in the kiddie pool of virtual reality, but Daydream is slicing through the lap lane in a swim cap. It may not have the scrappy appeal (or sweet price tag) of its forebear, but it’s slick, unobtrusive, and expensive-looking. (It’s also only available to Google Pixel users, but more on that later.)

The first thing you notice about Google’s Daydream VR is that it just doesn’t look like the headsets produced by heavy hitters like Sony or Samsung. Just as Google Home mimics items already around your house, Daydream VR looks like it could go incognito in your wardrobe. It’s wrapped in cloth, which looks great and makes it washable. Much appreciated for the germ conscious who let sweaty friends use the VR headsets.

While the material makes the headset comfortable to wear, it can feel heavy after extended play. Like many virtual reality headsets, Google’s Daydream VR headset uses a single strap to keep the device in place, which simply isn’t as comfortable as something like the Playstation VR. Even Samsung Gear VR (which is cheaper) has a second strap to better support the device. 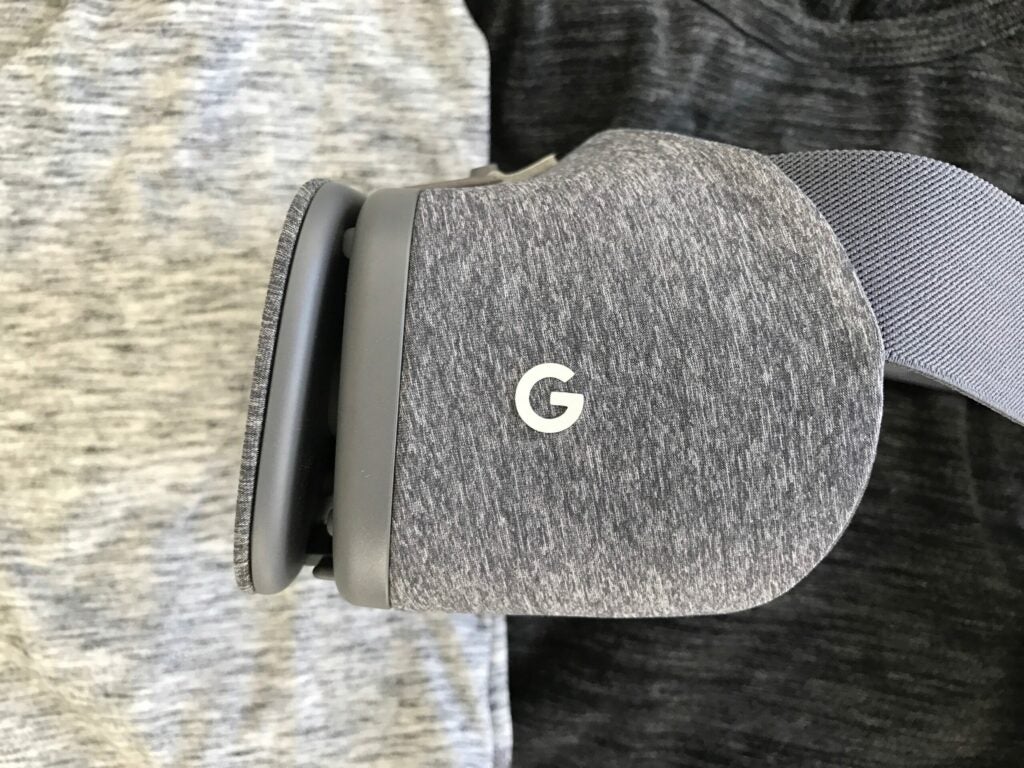 This comfy VR headset is the sequel to Google Cardboard.

No wires and no plugging things in

Google Daydream VR works with your smartphone, which means, unlike Playstation VR, HTC Vive or other more powerful headsets, users won’t be attached to a PC or game console. There’s no Matrix-esque tethering of your head to the gaming rig, and no need to worry about tripping over a cord.

Google’s headset has this in common with other virtual reality solutions like Samsung’s Gear VR. Where the two differ however is pairing. Samsung’s solution requires you plug one of their (hopefully not-on-fire) smartphones into the headset and then lock into place. Google’s Daydream VR lets you simply place the phone onto a pad and uses NFC to pair the two.

That means that you won’t have to worry about the Pixel only offering a USB-C plug when your phone has a micro-USB charging port, or vice versa. Though if you’re wondering how this might work with your phone, that brings us to our next point…

One of the many strengths of Google Cardboard was interoperability. The low-budget VR device let users plug in iPhones, Nexus devices, and Samsung phones. Google’s Daydream VR will only work with Google’s Pixel phone. For now, at least.

Google’s goal is to make Daydream a VR standard for phone makers to rally behind. The company has promised that third-party hardware makers like Samsung and LG have Daydream-supporting headsets and phones on the way. For now Daydream VR seems very proprietary, but eventually the supported headsets and phones could allow the same diversity as Cardboard.

Google’s Daydream VR makes use of a remote control that can be strapped to the inside of the headset when not in use—which you’ll want to make sure to do! Because if you lose the remote you won’t be able to navigate the Daydream menus. Competitors like Samsung’s Gear VR use a trackpad on the side. Even Google Cardboard had one button that users could press to select. The Daydream VR headset has no external buttons on its body. Google hasn’t made mention of replacement remotes, but we’ve reached out to find out more.

The remote itself, while irritating by nature of its very existence, isn’t too bad. The face has a clickable trackpad and two buttons. On the side is a volume rocker and toward the bottom is a charging port. While inconvenient if lost, the remote is a comfortable experience when compared to raising one’s hands and feeling around the side of a VR unit. Plus the remote offers motion tracking and tilt detection. The difference is similar to what separates Nintendo’s Wii Remote controller from the Wii Remote Plus. And it can lead to some fun uses, like letting you wave a wand in the Harry Potter Fantastic Beasts game. Just make sure to use that included lanyard.

But What About My Wallet?

If you already own a Google Pixel phone, (which is a hefty investment), then you’ll be happy. Google’s Daydream VR is $79, which is more affordable than the $99 Gear VR. If you already own a Pixel phone, the extra money is worth it. If you don’t, well, we wouldn’t suggest switching your entire tech platform just to get a Daydream VR. After all, there are plenty of other VR options and more are on the way.