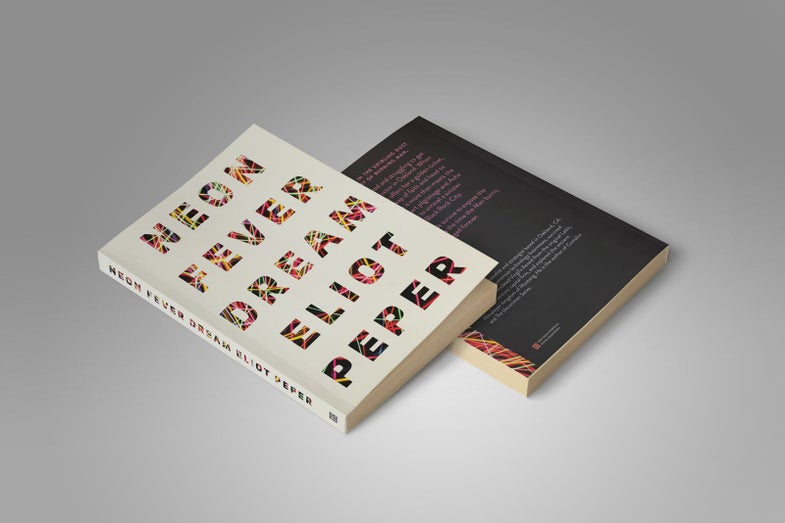 We’re still a few weeks away from the annual Burning Man festival in Nevada’s Black Rock Desert. I have yet to attend the psychedelic gathering of “radical self-expression” and increasingly plush accomodations for attendant tech tycoons (and I’m not going this year). But I feel like I just survived the craziest Burning Man ever thanks to Neon Fever Dream, a new espionage novel by tech entrepreneur turned author Eliot Peper.

I was blown away by Peper’s last novel, Cumulus, a near-future, dystopian, techno-thriller about a rogue spy’s inflitration of a Google-like company, which was released earlier this year.

Neon Fever Dream is a wholly new story set the present. It’s less sci-fi and more spy fiction. At 210 pages, it’s a short read — one that feels even quicker due to the propulsive plot.

There are some overarching technological themes that inform the novel: the increasingly omnipresent surveillance state in America, the internet’s ability to both illuminate and obfuscate information, the value of “meatspace” (physical reality) in a time when seemingly all societal systems are being digitized. But these are largely backdrops for the tightly-weaved tale of espionage and self-realization at the book’s core.

Nonetheless, fans of Cumulus will feel right at home with Peper’s accessible, inviting prose and scenic detail. His vivid descriptions of characters and settings makes visualizing them effortless and enjoyable.

And a time when big movie and TV studios are being called to task for a lack of diversity in characters and casting, the well-rounded characters with diverese backgrounds that appear in Neon Fever Dream feel refreshingly realistic for America circa 2016.

Without divulging too many details, the story concerns Asha Amarasuriya, a strong-willed instructor of krav maga, who receives a sudden invitation to attend Burning Man with her bold, beguiling martial arts’ student — an intrepid independent journalist named Lynn. Although Asha is initially reluctant, events in her life spark her to make the impulsive decision to tag along for a ride that turns much wilder and more violent than anyone expects.

Flashing back and forth in time, the story brings together Tongan gangsters, breakaway Tamil death squads, wine-loving EMTs, and more, throwing them all into a kinetic finale more incendiary and captivating than the actual “burn” itself. Blood is shed, lives are lost, backs are stabbed, love is made, lessons are learned, and by the end of it all, you might even welcome a return to your comparatively prosaic life, away from the playa.

I think Cumulus is still the superior novel, but whether you’re headed to Burning Man or not, you should do yourself a favor this summer and check out Neon Fever Dream. Unlike most things at the festival, it will cost you some real money ($4.99 for the Kindle edition on Amazon). But on the flipside, you don’t have to leave your own private toilet to enjoy it.