These Incredible Space Station Concepts Never Got Off The Ground

Before we built the International Space Station, these concepts promised incredible futures. 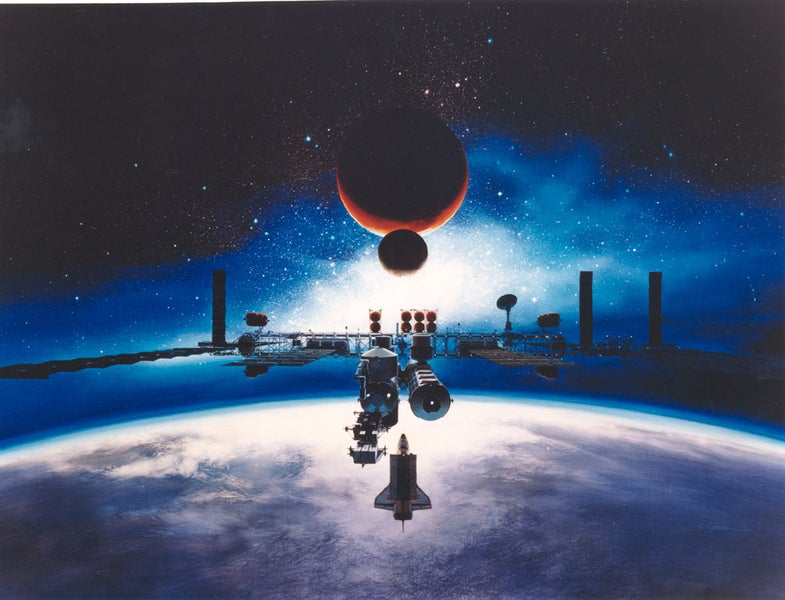 The International Space Station has been continuously occupied since November of 2000, and last year President Obama decided to extend its operational lifetime until 2024. The ISS is a truly a unique space, a microgravity laboratory where NASA can study the effects of prolonged weightlessness on the human body and develop the technologies to keep astronauts alive in this alien environment.

The ultimate application of ISS programs, at least in the near-term future, is to facilitate manned missions to Mars, something space visionaries have been pursuing for decades. But historically, space stations have played a far more integral role in deep space human exploration than just a place to develop technology. I’ve got a massive article coming this weekend about space stations and NASA, but in the meantime enjoy this gallery of some great space station concepts!

Want to find the images and browse yourself? Here’s one gallery from NASA’s history office, and one from the Marshall Spaceflight Centre. 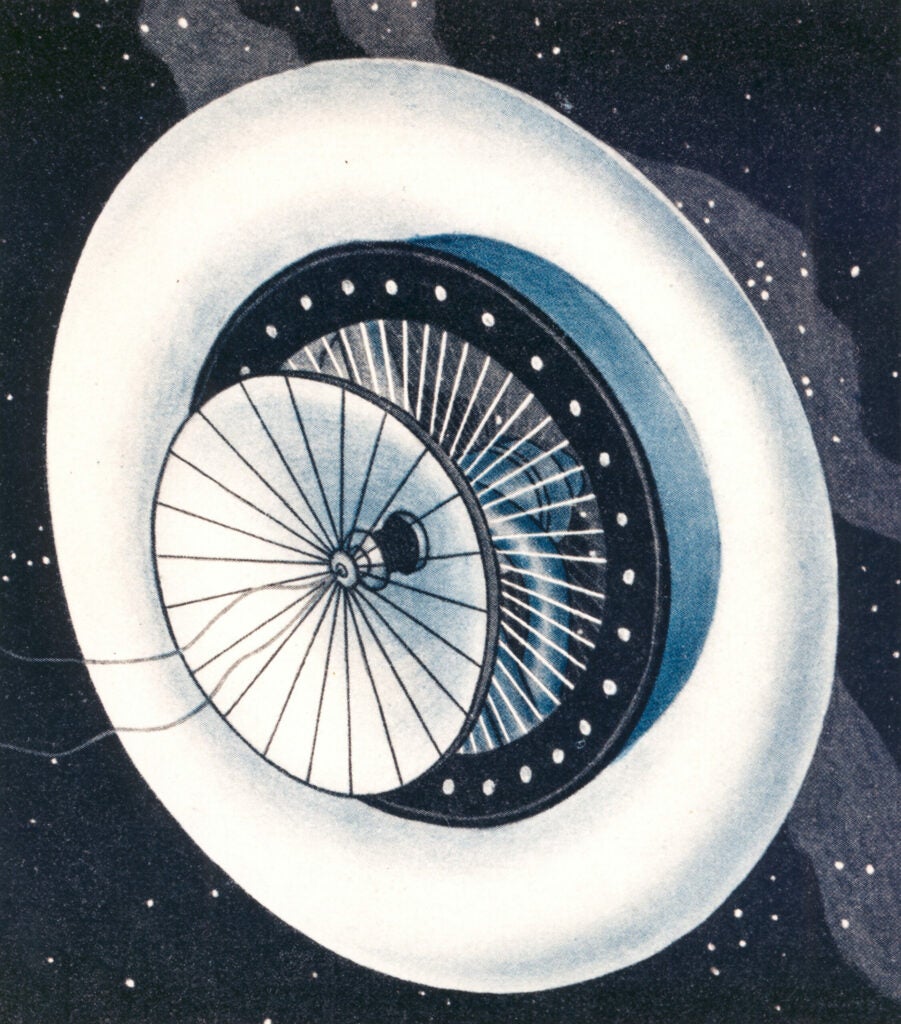 Austrian Herman Noordung’s 1929 concept for a toroidal space station that would generate artificial gravity by spinning. 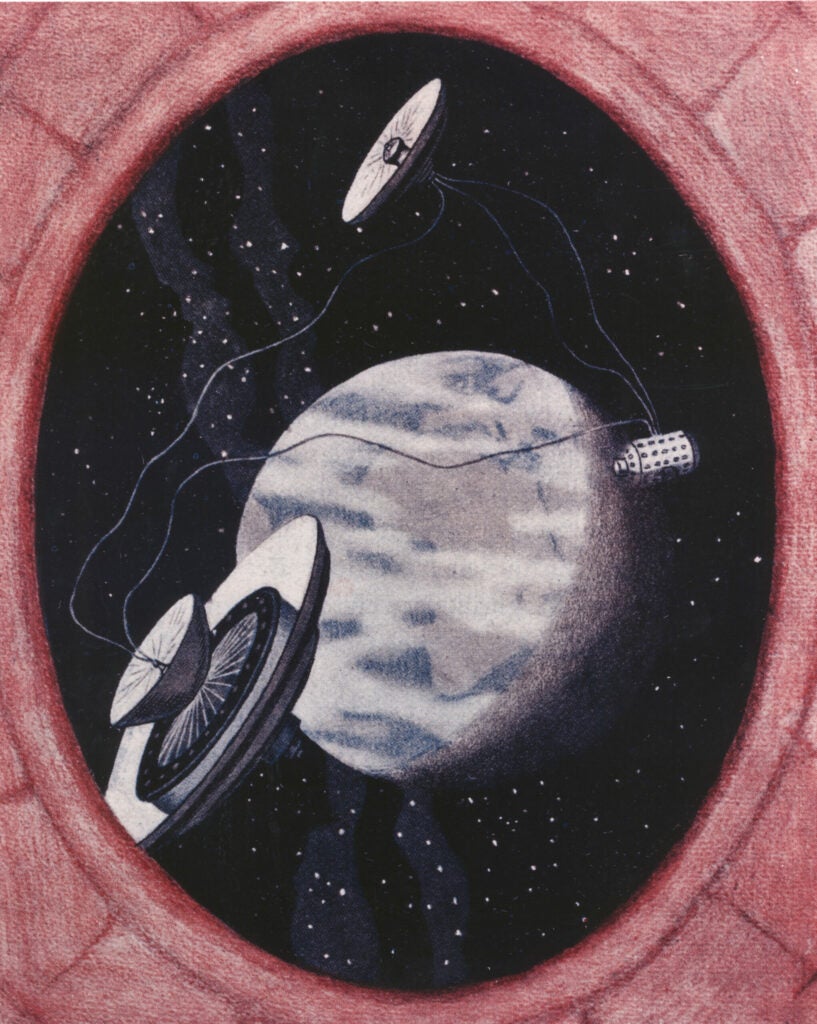 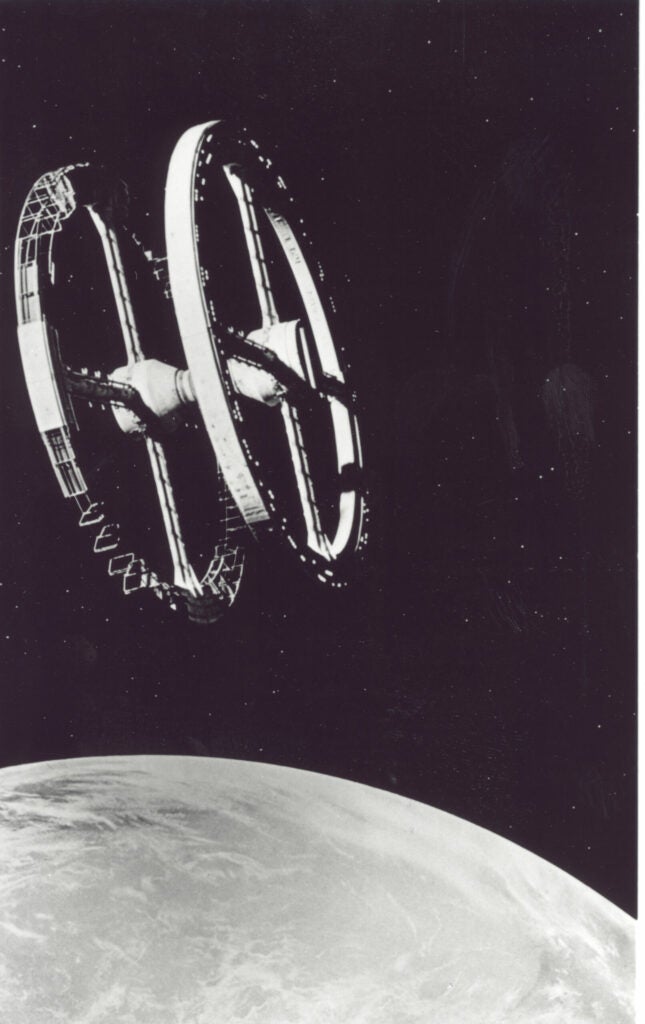 The torus space station as popularized by Stanley Kubrick’s 2001: A Space Odyssey. 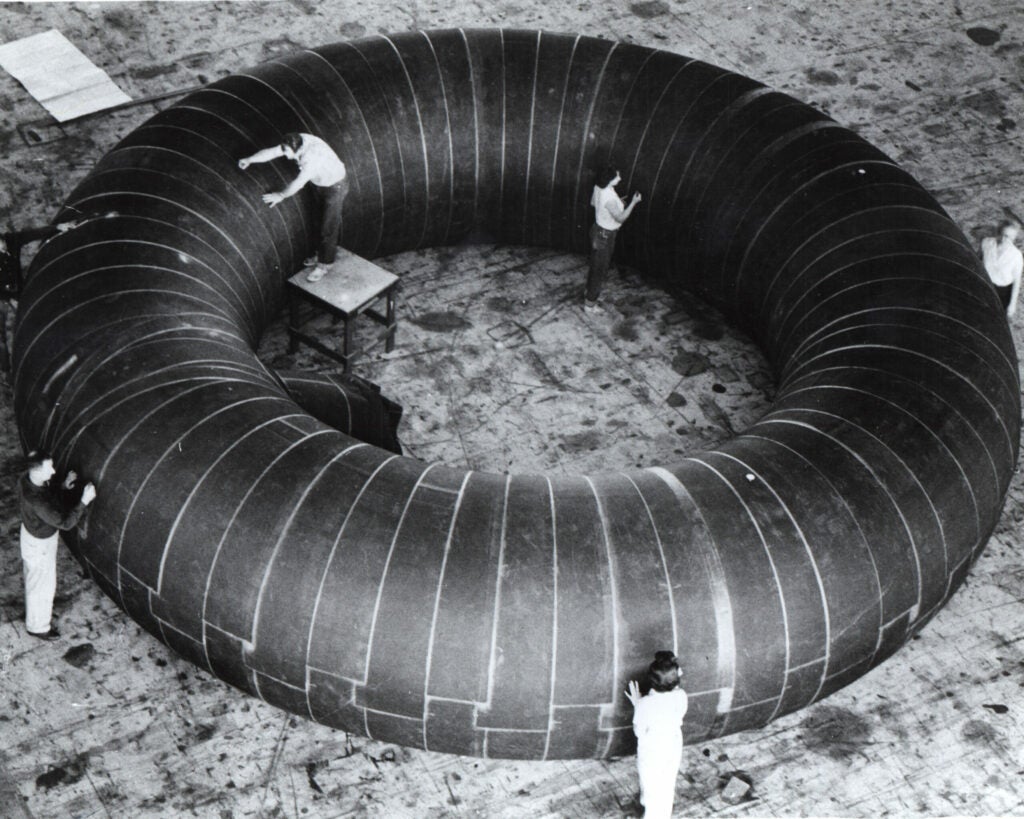 NASA explored inflatable toroidal space stations in the early 1960s. Most of these concepts were studied out of the Langley laboratory. A 1969 concept study of an Apollo-hardware space station spinning to create an artificial gravity environment. 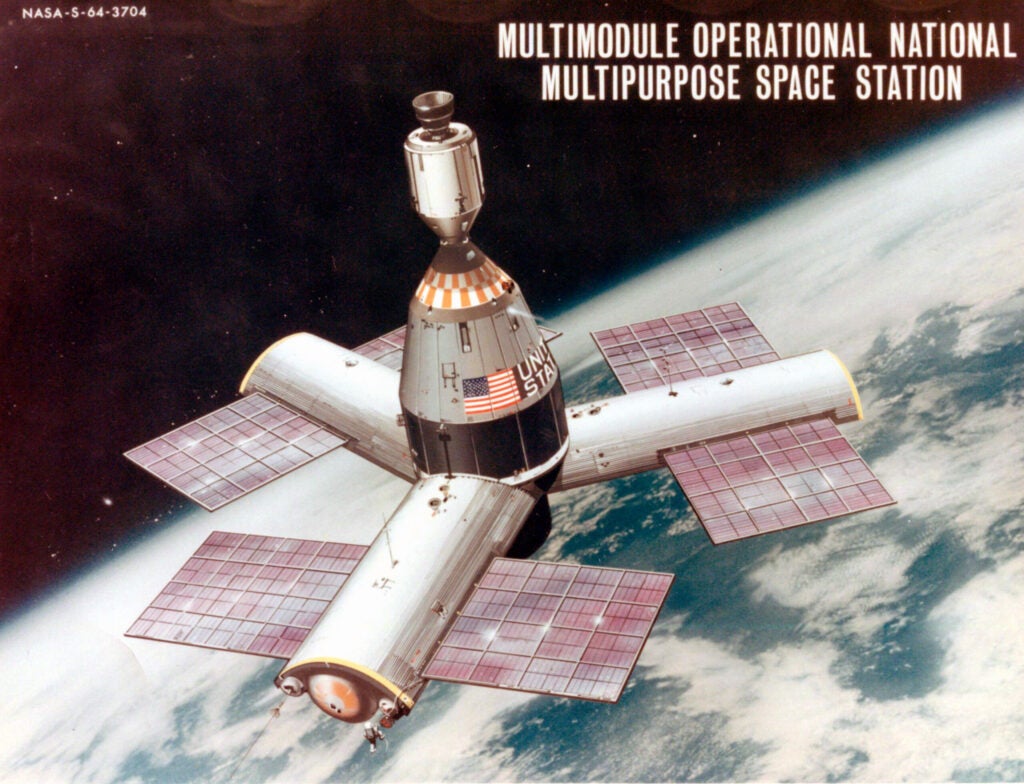 This three-radial-module space station concept from 1960 was designed to use Apollo hardware to get astronauts to and from the station. 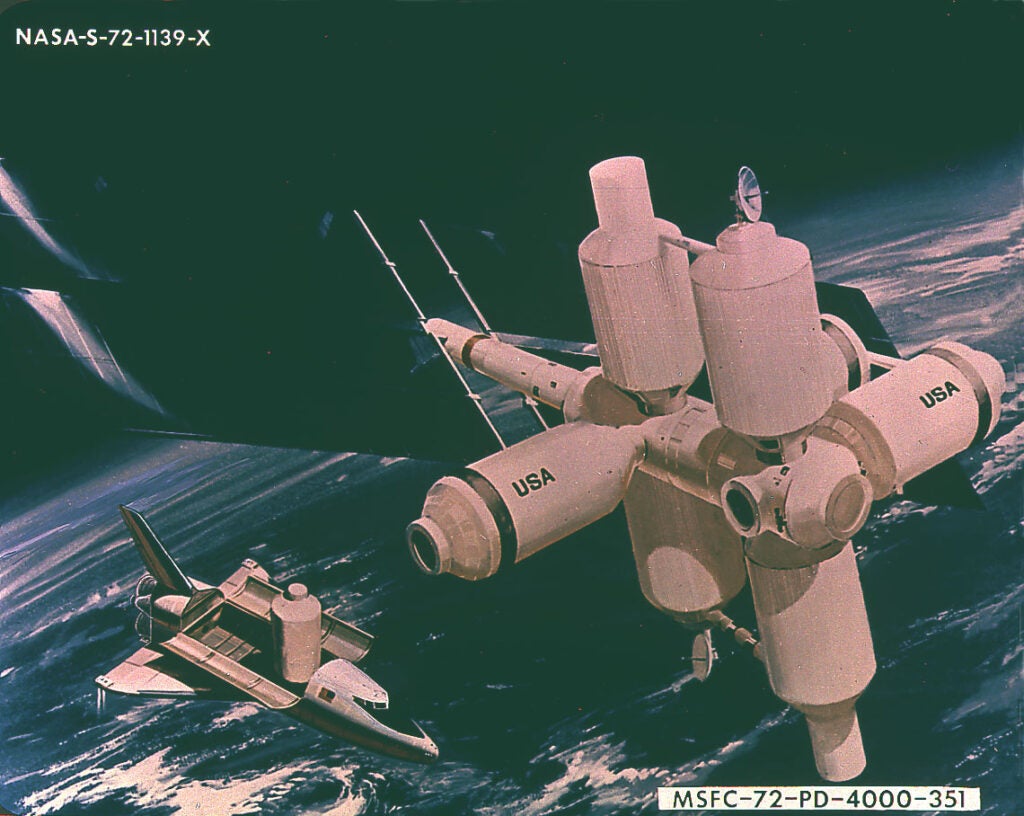 This 1972 concept was a modular design using Apollo hardware, a design that could be modified and grown with additional hardware. 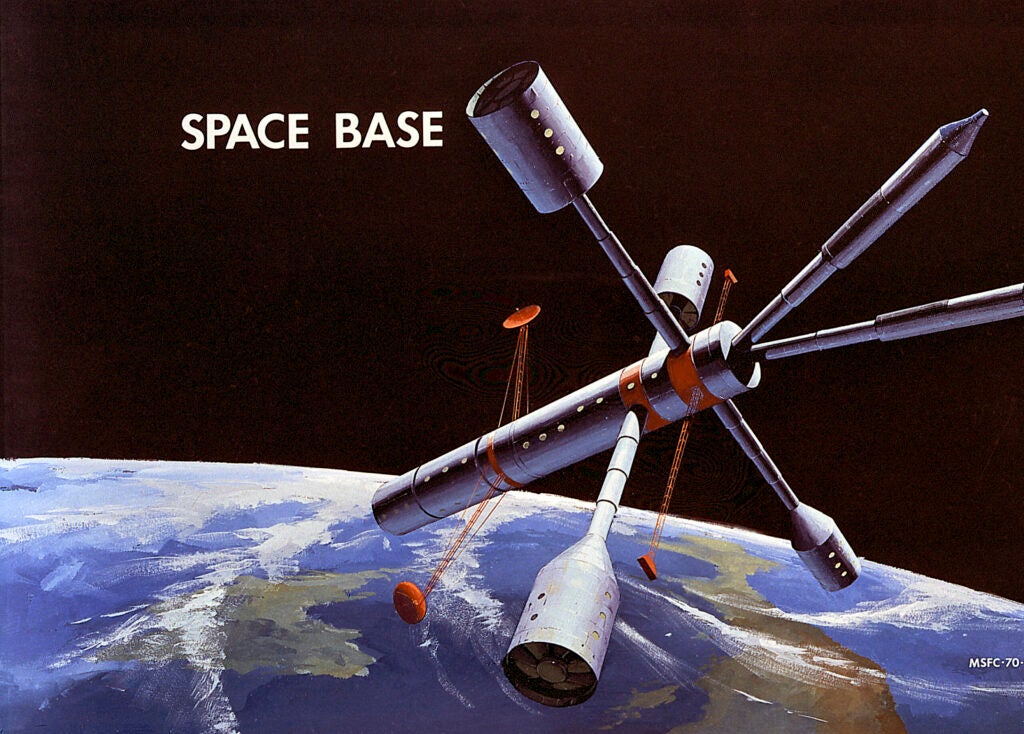 This 1969 concept was for a 100-man space station called Space Base. It was intended as a laboratory and living space that could double as a home port for nuclear-powered space tugs that could ferry astronauts to the Moon. 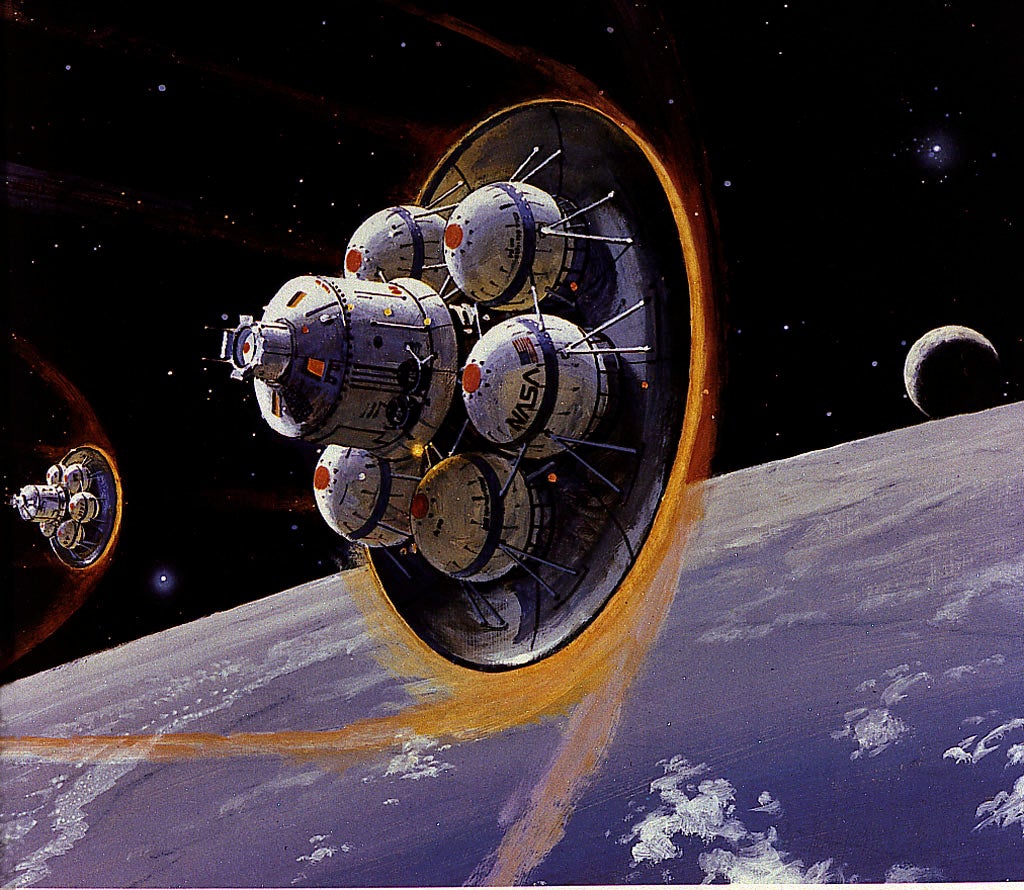 This concept art from 1989 shows the ferry spacecraft used to take astronauts between a space station and the Moon, and possibly Mars. 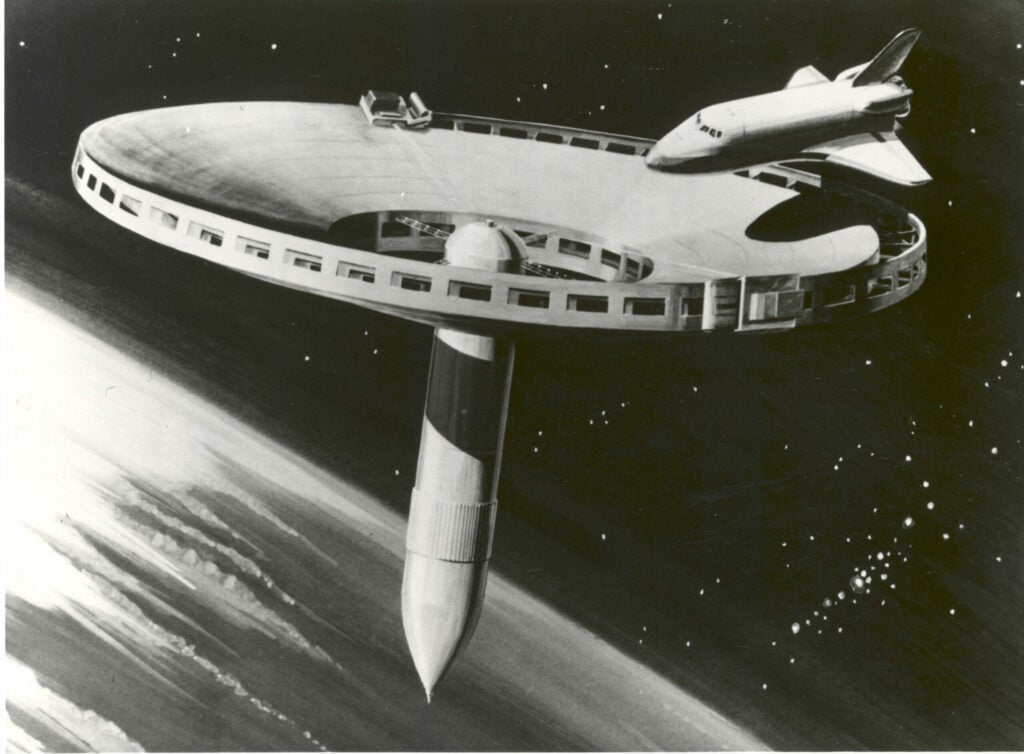 Spider, but not the Lunar Module 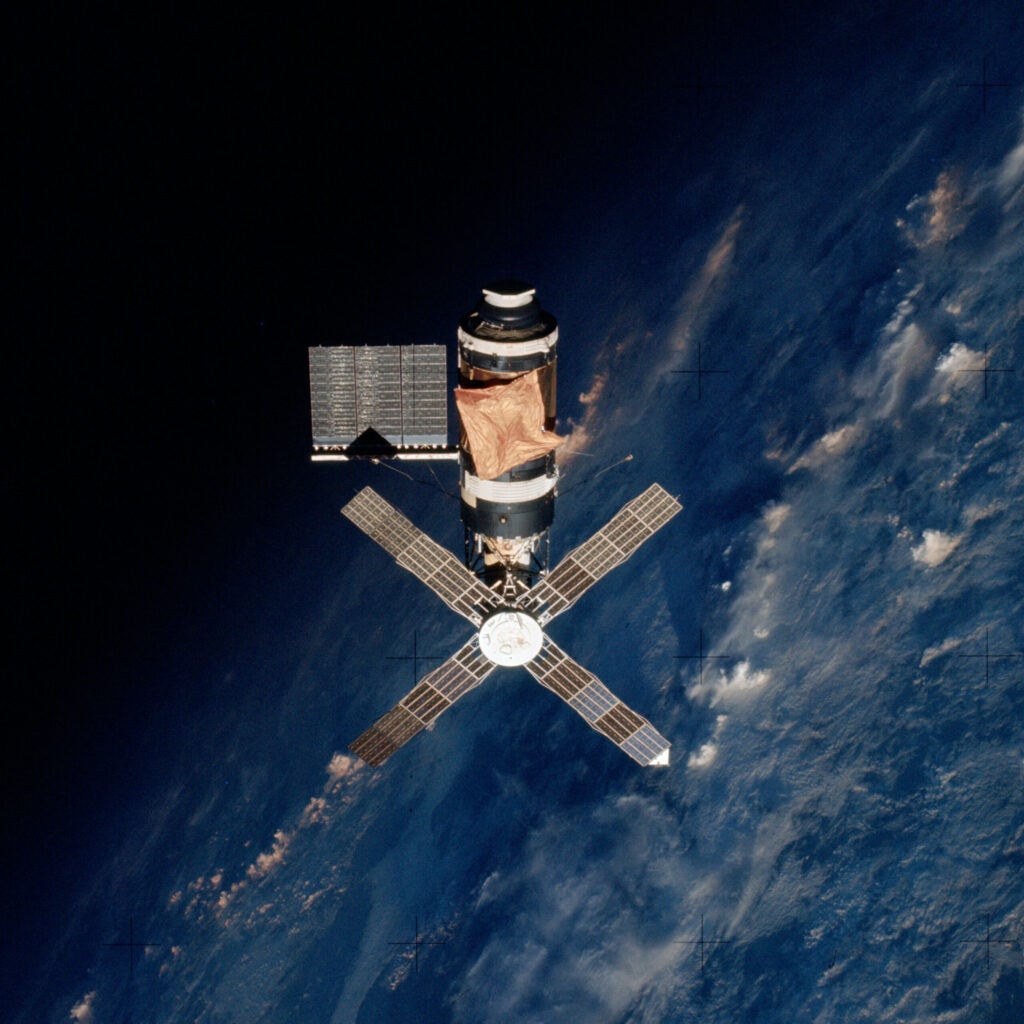 Skylab was America’s first space station. Launched in 1973, it hosted three crews before it was abandoned in orbit and left to fall to Earth. It reentered the atmosphere in 1979. 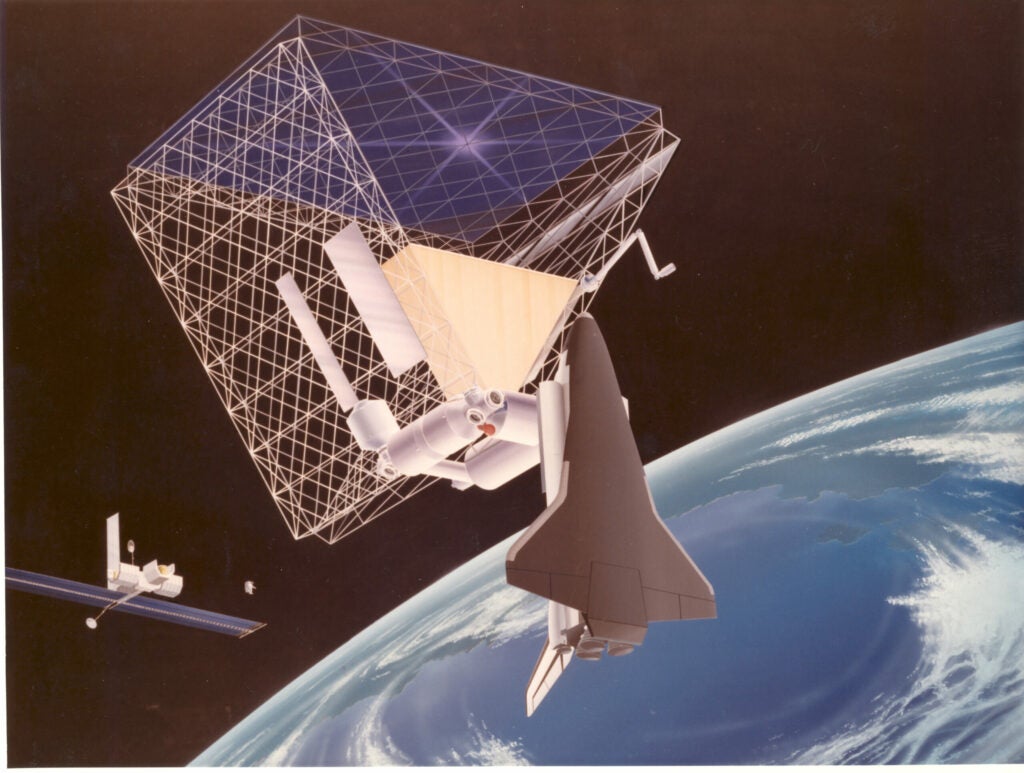 The Roof In Space

This conceptual space station came out of NASA’s Johnson Space Centre in 1984. Called the “roof” concept, it had an array of solar cells on the upper portion of a triangular structure. Inside the structure would be five experiment and living modules for living as well as plenty of space for external module. 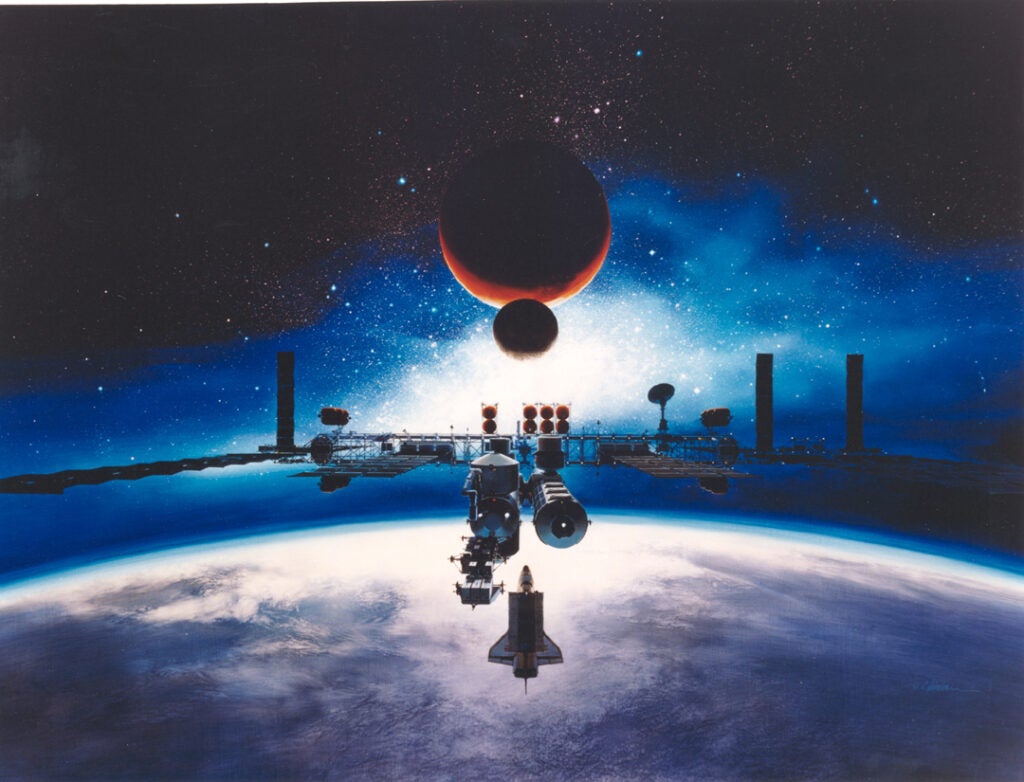 Another artist’s concept of space station Freedom in orbit with an overly large Moon and Mars in the background. 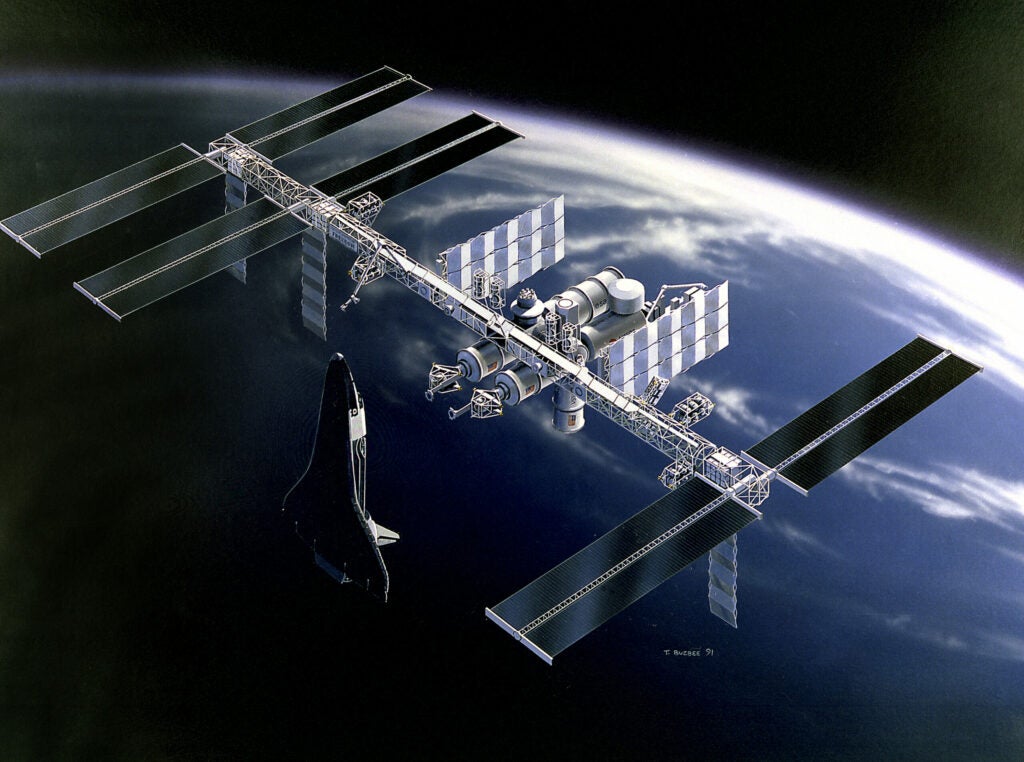 This 1991 concept art shows space station Freedom in orbit around the Earth. Freedom was the first true space station concept NASA tried to get off the ground. It was designed to be the launch point for missions to the Moon and Mars in addition to an orbital living and work space. 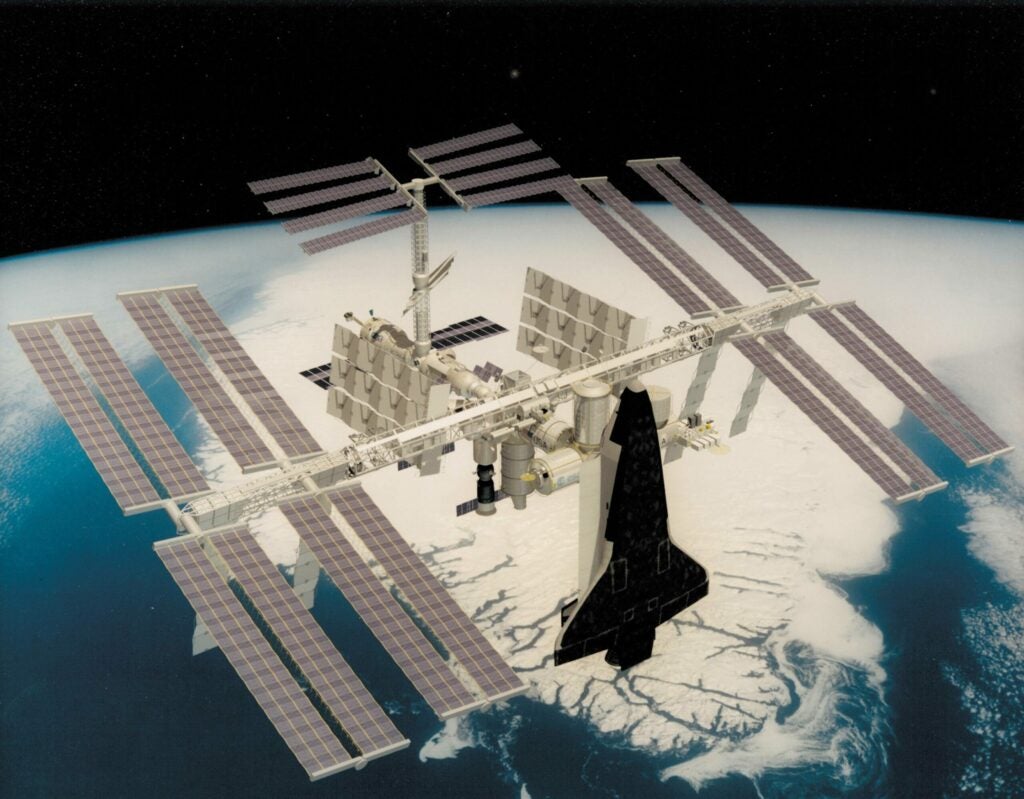 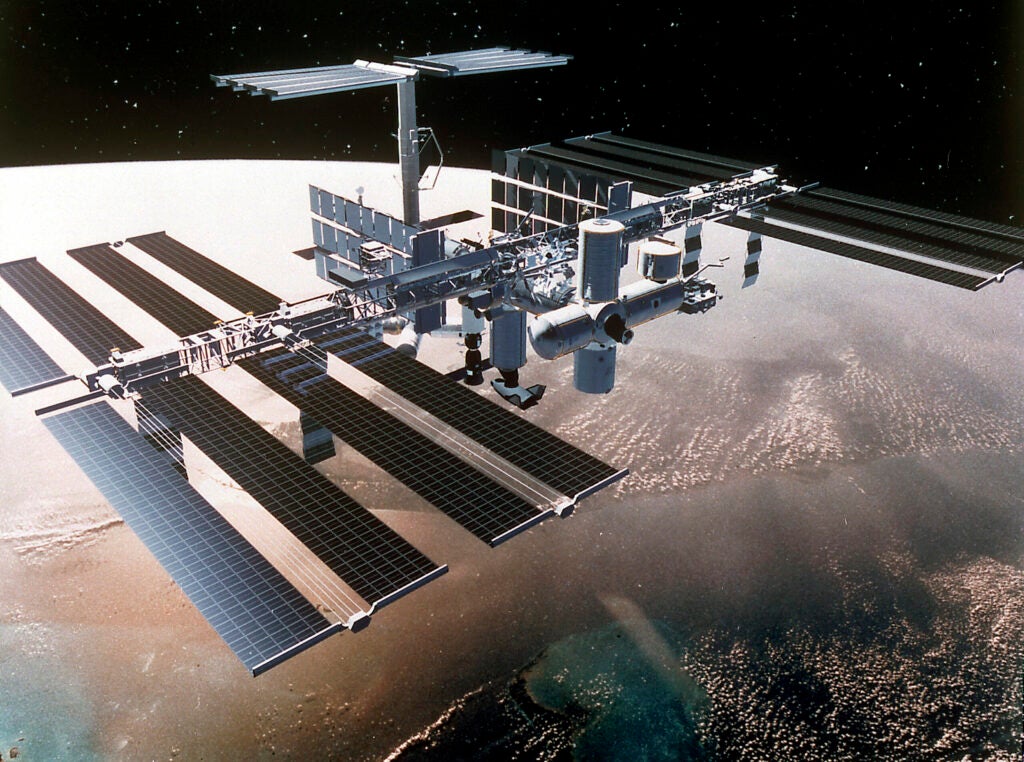 This 1998 art shows one artist’s concept of what the International Space Station would look like when it was finally completed. 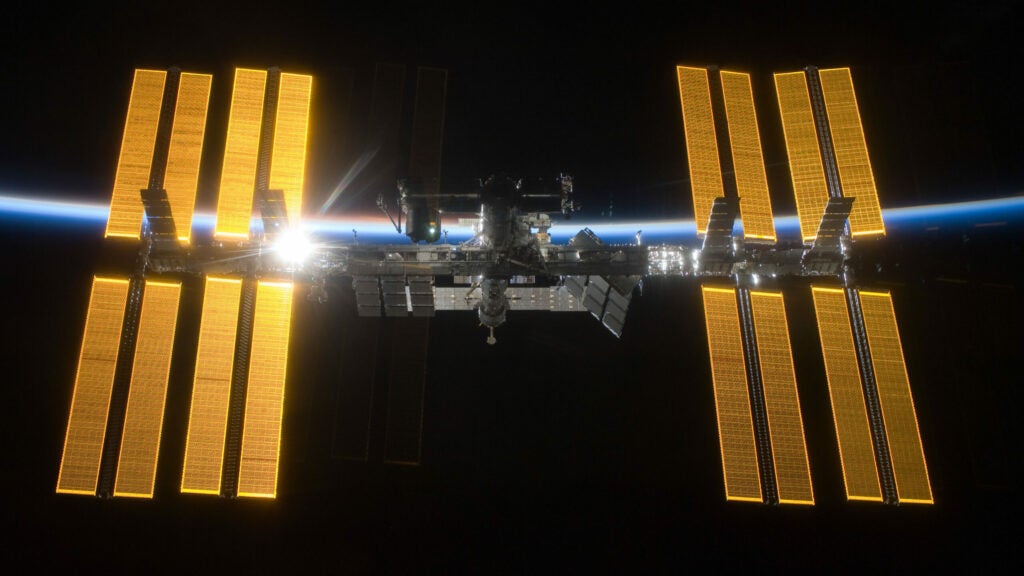 The ISS in orbit, the station we all know and love.
Space
history