Museum Of Ice Cream Delivers A Scoop Of Science, But Only If You Ask For It 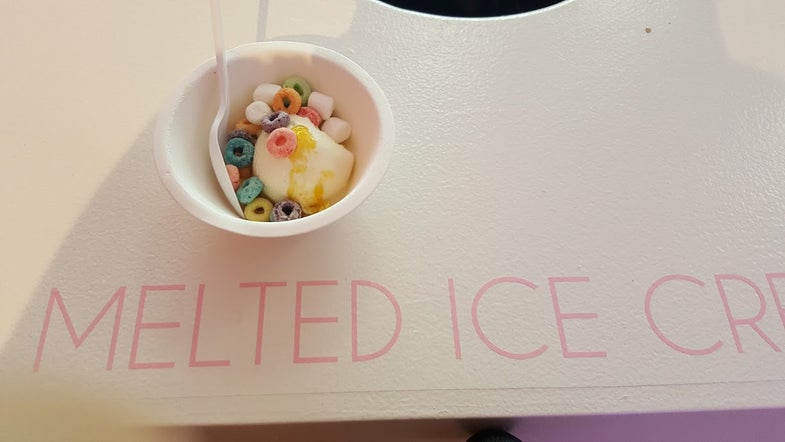 Ice cream is a scientific marvel. Under a microscope it’s a psychedelic arrangement of fat globules, air pockets, liquid and ice crystals. It takes a precise method of mixing, pressurizing, aerating and freezing to get its creamy texture, and its flavor comes from an array of tongue-stimulating molecules. So, when we heard an ice cream museum was opening up in New York City for just a month, we knew we’d have to go. But would they nerd out over milk fat and flavor molecules with us?

The small Museum of Ice Cream opened today, July 29, in New York’s West Village. It is a sensory love letter to ice cream, whose seven or so rooms are focused more on providing silly ice cream-related shenanigans (like a pool full of fake sprinkles) than providing substantial ice cream-related knowledge. Since the experience is already sold out, here’s a highlight of the science we saw.

What Is Ice Cream, Anyway?

One question you probably won’t get answered is, well, what the heck is ice cream? The Food and Drug Administration says it’s a product made by mixing and freezing simultaneously a dairy product and protein with flavors and sweeteners. It needs to be at least ten percent milk fat and weigh at least 4.5 pounds per gallon. It can have other things like egg yolks, but if it’s more than 1.4 percent egg yolk by weight, it’s usually called “frozen custard.” Variations like gelato and soft serve come from varying the proportions and preparations of the ingredients; gelato has less milk fat, and soft serve is prepared at a higher temperature.

The museum guide provided some ice cream history, like the oft-cited fact that one summer, George Washington dropped $200 on ice cream, around $5,000 today. However, that fact is a lot less impressive if you remember that there were no freezers, and that he was probably entertaining guests — he also once bought 36 ice cream bowls to serve the dessert in.

After our first scoop of ice cream, we were greeted with an edible helium balloon. “What happens is we’re dissolving different sugars together. One sugar gives us the structure we need, while the other prevents it from crystalizing,” said Dr. Irwin Adam Eydelnant, Creative and Scientific Director of Future Food Studio who coordinated some of the museum’s features. “We have two other ingredients. One gives more elasticity, and the other gives us the viscosity.” The mix is a caramel-like goop of different sugars that expanded into a grainy, cylindrical transparent balloon.

Others have made edible helium balloons; chefs at the three-star Michelin restaurant Alinea in Chicago make their own dessert balloon that uses a blend of sugars with water, fine-tuned to the humidity in the air. Eydelnant wouldn’t tell us what sugars or chemicals gave the balloons their stretch. “We gotta keep our secrets secret.”

The second room was devoted to the scoop. A guide had visitors deliver scoops of fake ice cream onto a platter to make “the world’s largest sundae,” fake so that the ice cream wouldn’t melt. After the guide told us that the ice cream scooper was patented in 1897 by an African-American man named Alfred Cralle, I stopped paying attention to this room and was more interested in reading Wikipedia. I wish the museum would have highlighted all of the factoids like this! In Cralle’s first design, by squeezing the spring-loaded handle, a gear rotated which would spin blades inside the ice cream mold to loosen the ice cream. Cralle’s scooper was cone-shaped, “though this mold may be of any desired shape,” he writes in the patent. 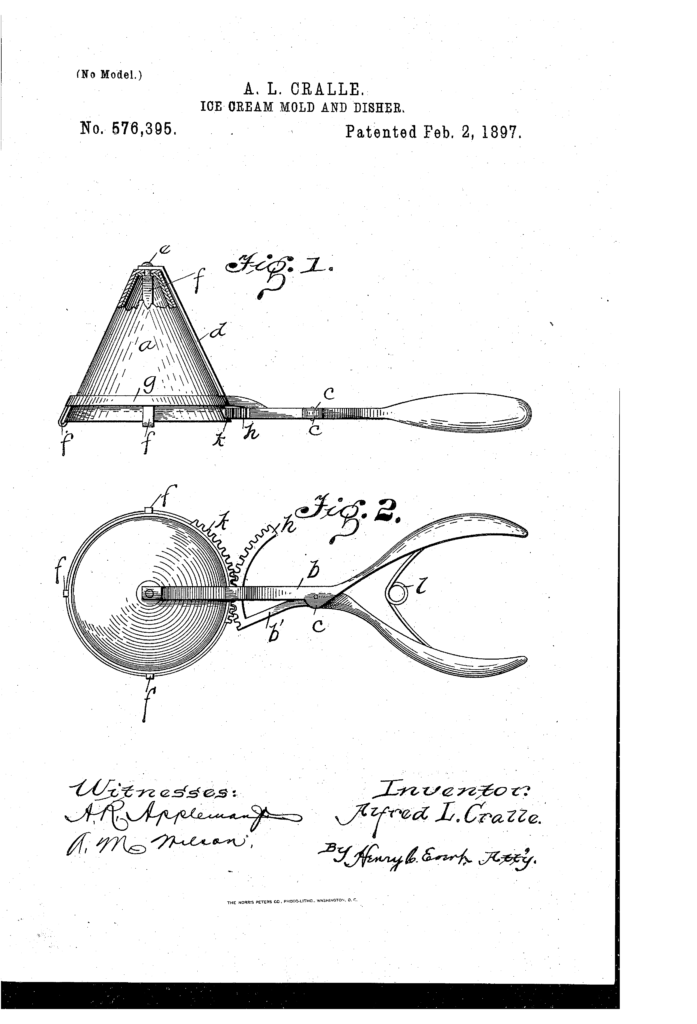 The first ice cream scooper was patented with a cone shape mold.

If you were in college in the past five or so years, you’ve probably been to a taste trip party: someone buys a package of miracle berries, everyone eats one and then sits around tasting lemons, which suddenly taste sweet. Eydelnant used the miracle berry to turn lemon slices into toppings on a cone of pink vanilla ice cream. I will point out that at a museum devoted to a food with an infinite number of possible flavors, everything I ate was vanilla. Hopefully the folks who go this month get more variety.

Eydelnant explained that the berries contain miraculin, a protein that latches right onto your sweet taste buds. “The protein shifts shape in a way that “turns on” the [sweet] taste bud, creating a sensation of ultra-sweet that drowns out the sour,” continued Mark Brown in a story for Wired.

We also got to swim in a much-hyped pool full of rainbow sprinkles that turned out to be plastic, and sniff the chocolatey aroma of a dark room lined with crushed cocoa beans, but the respective chaos and sultriness blinded us from observing any interesting science there. The walk-through lasted around a half hour and was difficult to enjoy if you came expecting a educational museum rather than an experience; all of the blurbs about the exhibits are tucked in corners or hidden behind a chatting guide. You can still whet your appetite for knowledge if you’re a geek like us but don’t have the patience to read the captions as the crowds push through the small museum, though. Just ask for Dr. Irwin Adam, a friendly food genius who answered almost all of the questions we had for him.

If you didn’t get tickets or aren’t in New York, I suggest you just go get yourself an expensive scoop of ice cream and spend some extra time enjoying the flavors, textures, and aromas as you think about the scientific complexities that make it such a delectable treat. And maybe buy yourself some real sprinkles and dump them all over yourself.