The Feiruz wood lizard is one of more than a dozen recently found Peruvian creatures. 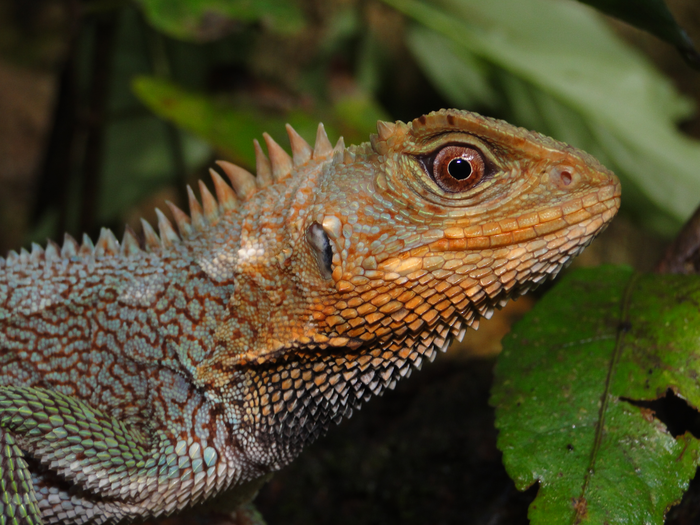 The unique reptile is noted for its unique scales and gold-ringed eyes. Pablo J. Venegas
SHARE

The Huallaga river basin, which carves its way through the Central Peruvian Andes, is home to a plethora of ecosystems. One such ecosystem is the Yungas, a biodiversity hotspot on the eastern slopes of the Andes that many endemic mammals, birds, and reptiles call home. The ecoregion has a multitude of microclimates amongst its steep slopes, sweeping valleys, and jagged ridges, ranging from dry forests to tropical jungles.

Despite its abundance of unique species, the area is largely unexplored by biologists and ecologists. In the 1980s, wars against rebel armies and drug traffickers disrupted the region, preventing scientific expeditions. Recent surveys since the turn of the century have discovered a dozen new species of amphibians and lizards including a new type of glass frog and an arboreal iguana.

One of the latest creatures discovered is a new species of wood lizard named Enyalioides Feiruzae, or the Feiruz wood lizard. The discovery was published late last month in Evolutionary Systematics and marks the 16th species in the genus Enyalioides —7 of which were found in the past two decades.

“You can find lizards in Peru that are strikingly different from others, and I can tell in the field if it’s a new species,” says curator of amphibians and reptiles at the Center of Ornithology and Biodiversity in PeruPablo Venegas, the lead author of the new study. “When I saw Enyalioides Feiruzae, I knew it was a new species right away due to the characteristics.”

[Related: This fossil isn’t a hummingbird-sized dinosaur, but an unusual lizard.]

One of these characteristics is their rainbow-hued calico scales. Males, for example, have a range of coat colorings from a dramatic grayscale to a kaleidoscope of turquoise and tangerine with ruddied swirls. Pale lines circle their tails and limbs. Meanwhile, females are much less flashy with a greenish or floury brown hide peppered with deeper blotches.

Both male and female scales are also larger and more pointed in certain areas than similar species. Their heads also protrude a bit higher due to the slight differences in the positioning of their vertebrates—allowing a better look at the gold ring encircling their reddish-brown eyes.

The species was named after a green pet iguana, Feiruz, who the study described as the “muse and lifelong friend” of Catherine Thomson, a Michigan resident who financially supports biodiversity and conservation research.

“It’s the first time in my life I named a species after the pet,” laughs Venegas. “But we don’t have a problem naming the species after her lovely pet iguana.”

It took Venegas and his team seven years in the field to discover the new reptilians. They spent many nights observing, capturing, and measuring the rainforest dwellers who sleep on bush stems about half a foot above ground. While the biologists released most of the dragon-like creatures, some were euthanized and brought back to the museum for further study.

“That’s the hard part of the research—that you have to euthanize some of the individuals so you can review them in greater detail at the lab,” says Venegas, who has always had a soft spot for reptiles. “Many parts of Peru are unknown in terms of wildlife, it’s important we take some specimens back,” he explains. Once back in the museum they sequence their DNA, and preserve their bodies so future scientists can study them, too.

Venegas was inspired to study biodiversity in school after learning how much was undiscovered about the amphibians and reptiles in the Peruvian region. “Biodiversity research is important because we need to know what sort of life is on the planet in order to protect,” he says. “We are in a race against humankind destroying the rainforest and the oceans with activities like agriculture, cattle ranching, and clear-cutting the forests for lumber.”

[Related: These lizards use built-in ‘scuba gear’ to breathe underwater.]

This is especially true in South America where rainforests are disappearing at an alarming rate. In fact, a recent study suggests the Amazon rainforest—the largest in the world—could collapse by 2064 due to habitat destruction and climate change.

The Feiruz wood lizard is already experiencing a changing landscape. The establishment of coca plantations in the 1980s and 90s has fragmented the Yungas region. Consequently, only one population in the Tingo Maria National Park is protected.

In Peru, the government determines which wildlife areas to conserve based on the number of species residing there, says Venegas. Priority is given to ecosystems that harbor endemic species. By discovering and naming critters, ecologists hope the government will take action.

“We need to know the number of reptiles and amphibians that exist to protect these ecosystems,” says Venegas, who has discovered more species in the region than he can remember. “Giving a name to a new species is the first step in giving them hope that we can protect them.”