The Carolinas are waging war against nickel-sized hurricane mosquitoes

Sprayers plan attacks from the ground and sky. 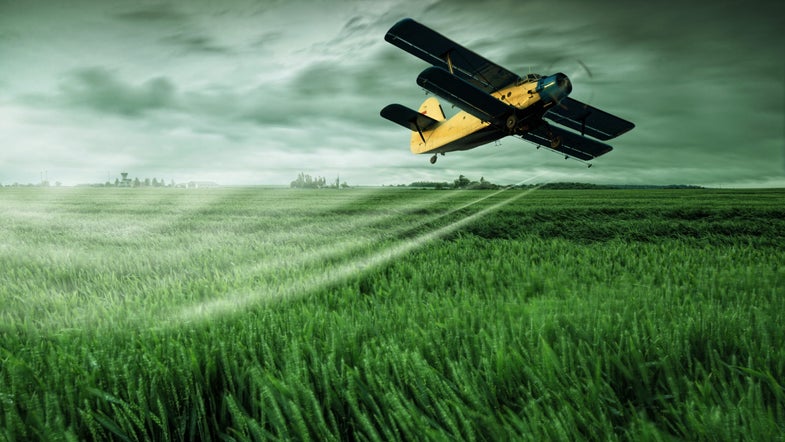 Tornadoes may not bring sharks, but as North Carolinians are now discovering, hurricanes can bring giant insects. In the wake of Hurricane Florence, more than two dozen counties have been inundated with massive mosquitoes, creating what for many amounts to a nightmare scenario.

The scene was like “a bad science fiction movie,” according to Robert Phillips, a resident of the centrally located Cumberland county. ” I told my wife, ‘Gosh, look at the size of this thing.’ I told her that I guess I’m going to have to use a shotgun on these things if they get any bigger,” Phillips told The Fayetteville Observer.

But now North Carolina is fighting back against the invaders. Governor Roy Cooper dedicated $4 million in relief funds to combat the outbreak on Friday, and as of Monday morning anti-mosquito trucks were already rolling the streets of Cumberland, spraying the air with insecticide, The Fayetteville Observer reported. Health experts have labeled these particular insects as more of a nuisance than a threat, but are still encouraging people to wear long sleeves and mosquito repellant, as a small fraction of the bugs could carry diseases such as the West Nile virus.

Even among scientists who study mosquitoes for a living, Psorophora ciliata has a fearsome reputation. In addition to being one of the largest species in North America, the gallinipper, as it’s commonly called, also has an especially painful bite. It seems to know it too, with scientific literature recognizing its “legendary aggressiveness.” North Carolinians, understandably disturbed, have taken to social media to practice some amateur entomology.

Although they look like a subtropical nightmare, gallinippers actually live all over the eastern half of the U.S., their habitat stretching from Texas to New Hampshire. Females lay their eggs wherever they can find damp dirt, and the eggs lie in wait for a flood or heavy rain. Hurricane Florence provided both when it dumped dozens of inches of precipitation on North Carolina last month, triggering a hatching frenzy. After getting rehydrated, gallinippers reach adulthood in less than a week—bringing North Carolina to its current state.

Governor Roy Cooper moved quickly to combat the swarms, announcing that $4 million in relief funds were available to help more than half of the state’s counties control their booming mosquito populations on Friday. The first wave of counter-measures has already begun. Insecticide-spraying trucks started patrolling the streets of Cumberland County before 8 a.m. on Monday and will resume after the work day ends, The Fayetteville Observer reports. An aerial assault will follow in the upcoming weeks, with planes blanketing the affected areas. Individuals can also join the fight with items called “dunks,” small disks that release a mosquito-larva killing bacteria when dropped into pools of water such as birdbaths or small ponds.

Texas counties took similar actions last fall after mosquitoes erupted from the ground in the aftermath of Tropical Storm Harvey, using U.S. Air Force reserve cargo planes to spray a nearly Rhode-Island sized area around Houston. This unusually strong response came because hurricanes hit the two states with a one-two entomological punch. First, the rains soaked the buried eggs and raised dormant species like the gallinippers. These insects activate only during times of flooding and rarely carry disease. But then, since most mosquitoes need open water such as ditches to lay their eggs, standing pools left by receding floodwaters increased the likelihood that other species would be able to breed too.

“Because of the flood there’s going to be more water. There are going to be more mosquitoes, and so we have to do the best we can,” the director of mosquito and vector control for Texas’s Harris County Public Health, Mustapha Debboun, told The Scientist at the time.

While aerial sprays and bacterial bombs represent cutting-edge anti-mosquito weapons, the U.S. has been targetting the winged scourge for more than half a century with decidedly low-tech methods. After The Great Depression, New Deal-era programs put more than 200,000 people to work digging ditches to literally drain the swamps of the south. Public health historians estimate that by 1945, workers had dug enough ditches to reach around the globe and then some, drying well over half a million acres of land (one acre can hatch one million mosquito eggs).

The Office of Malaria Control in War Areas, initially founded in Atlanta to stop soldiers from getting mosquito-borne malaria on southern army bases, delivered the final blow in the 1940s when it coordinated a mass spraying of nearly five million southern homes over the course of two years. The organization, which we know today as the Centers for Disease Control and Prevention (CDC), declared the country malaria free in 1949.

North Carolina won’t require such a wide-scale intervention, however. Upcoming chilly temperatures should kill whatever gallinippers survive the sprayings, experts expect. And there’s another silver lining. Psorophora ciliata enjoys snacking on the mosquito larvae of other species, so much so that some entomologists have suggested intentionally cultivating them to keep other, more dangerous populations down. The notion of releasing big mosquitoes to eat the small mosquitoes hasn’t yet caught on, perhaps in fear of the sci-fi chain of unintended consequences it could unleash (now how are we going to get rid of the mutant swallows??), but North Carolinians are well-positioned to enjoy its benefits nonetheless.